How can we see RemoveDebris capturing a satellite with a net?

The aptly named RemoveDebris satellite took a video of its net experiment.

The short sequence shows a small, shoebox-sized object tumbling end over end about 6-8m in front of the University of Surrey spacecraft.

Suddenly, a bright web, fired from the satellite, comes into view. It extends outwards and smothers the box.

"It worked just as we hoped it would," said Prof Guglielmo Aglietti, director of the Surrey Space Centre.

"The target was spinning like you would expect an uncooperative piece of junk to behave, but you can see clearly that the net captures it, and we're very happy with the way the experiment went."

The linked article is extensive and has a nice animated video of the whole mission (unlisted in YouTube: RemoveDebris Mission) but so far I can't find a video or even a sequence of images of the net capture of the test vehicle.

Question: How can we see the video or image sequence of the RemoveDebris satellite capturing a satellite with a net?

edit: after I wrote this post, the BBC seems to have added a video clip containing a bit of the net capture, and a short interview. Either that or it did not display properly earlier (which also happens from time to time here).

below: "The net as it was stowed in its firing mechanism" Credit Airbus. From BBC. 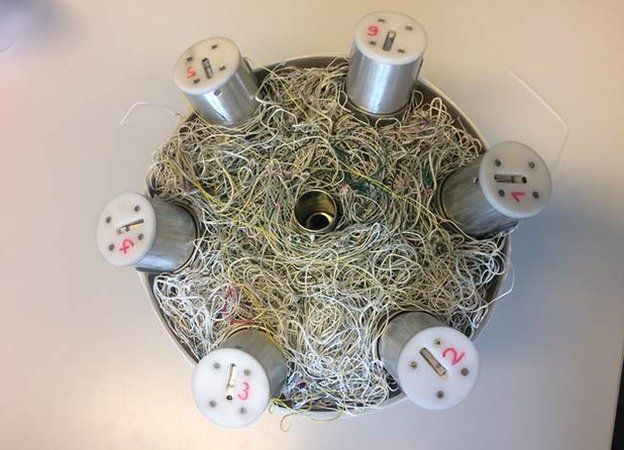 The raw video is available here and there's some more context in the video in this tweet.

6
How is satellite data used to find drug crops?
8
When can we (public) expect to see the first optical images of Jupiter from the Juno spacecraft?
5
Can image-stacking allow this 0.25 m satellite telescope achieve 0.65m resolution?
3
How can ICEYE-X1 capture 2D high resolution SAR images in "tens of seconds"?
1
How do Tom & Jerry (CANYVAL-X) measure their alignment with a distance source accurately?
8
Harpooning satellites? Is this really the best way to get them under control?
4
How does one get Context Camera (CTX) images from Mars with certain identification numbers?
6
Perseverance drove for the first time on Mars ! (on Sol 14) Can I find somewhere how much and in what direction?