What are robot arm singularities in the context of the Space Shuttle and/or ISS?

This comment on this answer has got me baffled.

What are robot arm singularities, in the context of the Space Shuttle's or ISS's large robotic Canadian arms?

Are these singularities related to spacecraft attitude, or just to the mathematics behind the robotic articulation algorithms?

A singularity in this context is simply a configuration of the manipulator system in which a degree of freedom is lost.

For example, for the Shuttle and ISS arms, the elbow singularity occurs when the elbow joint angle nears 180 degrees; the degree of freedom lost is the ability to translate the end effector away from the shoulder joint.

The relationship to the question about attitude control is that the software would have to avoid all these singularities if the arm were being used for attitude control. Just as they have to be avoided when the arm is being used to manipulate a payload.

Sometimes in the latter case the arm has to be reconfigured to avoid a singularity, and that sounds undesirable for the attitude control case. 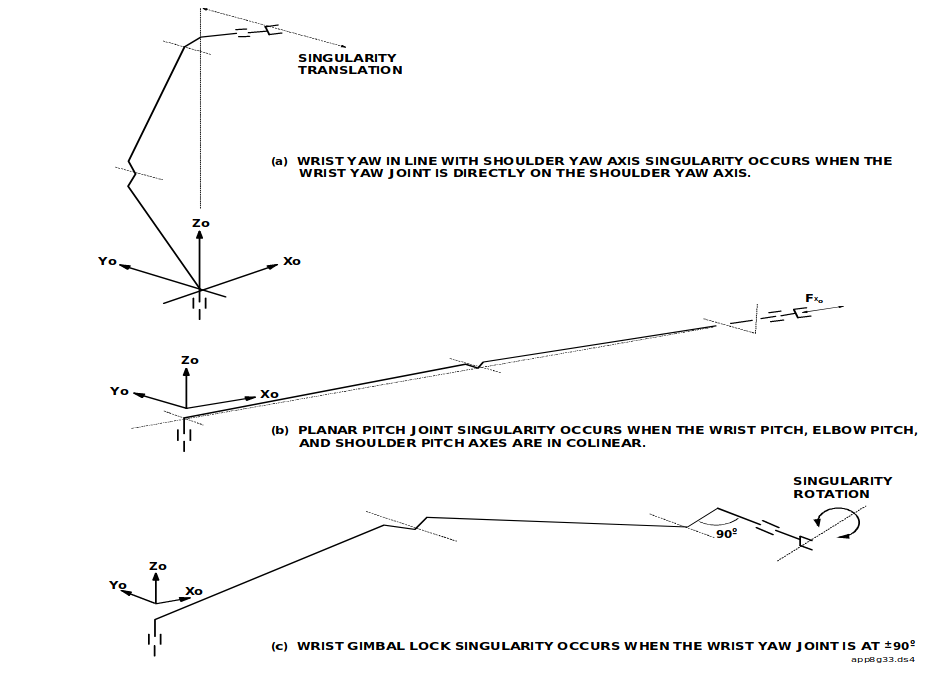 Not the answer you're looking for? Browse other questions tagged robotic-missions robotics robotic-arm or ask your own question.

5
Are robot arms ever used for attitude control in space?
-1
How can articulated spacecraft components increase the risk of gimbal lock?

8
Is there any type of mechanical bearing that can be used in the full vacuum of space?
6
Is Landsat-7's propellant resupply port "robot-ready"? (Restore-L mission)
8
Besides HST, JWST and stations, are there any examples of satellites designed for service in space?
6
How many different walk-off maneuvers can the ISS robotic arm do?
3
How many ISS robotic manipulators are shown in this image, and what are their names?
5
Are robot arms ever used for attitude control in space?
0
What is the difference between "body drag", "frictional drag" and "pressure drag" for astronaut or aerobot atmospheric locomotion in microgravity?
3
Why aren't ISS attitude control thrusters a "tool" picked up by robotic arms?