What criteria was used to select potential landing sites for Hayabusa-2's rovers on Ryugu?

and includes the images below of the designated landing site and two alternates, as well as a "close-up".

Is it known what criteria were used to select landing sites?

With a mass of about 5E+11 kg and radius of about 450 meters (density about 30% higher than water) the escape velocity is only about 7 cm/sec, and even if you dropped the ~1 kg landers from far away the specific kinetic energy upon "impact" is only about 0.07 Joules, so "crash landings" are not really a huge issue.

So what criteria did they use? Particular scientific interest based on spectroscopy or imaging? Suspected parallelism of the surface normal to local gravity? Something else?

Question: What criteria was used to select potential landing sites for Hayabusa-2's rovers on Ryugu?

below: "The Hayabusa2 team selected a planned landing site (in purple) and two backup options (in orange) near the asteroid’s equator." From here 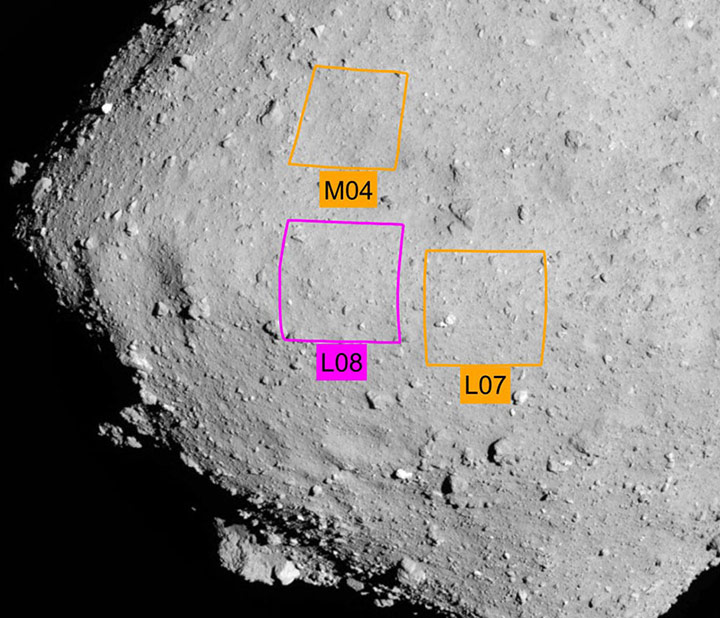 There is significantly more detail about how sites were selected for Hayabusa2 than for MINERVA-II1, so I would encourage you to read the entire document, but page 35 of the PDF (labeled as page 70) lists the following criteria for MINERVA-II1 landing sites:

It goes on to say that:

(Asteroid Ryugu has a pronounced ridge at its equator.)

Therefore, the decision was to:

Separate in northern hemisphere, more than 100m north of the equator.

I'm not sure why releasing the rovers over the southern hemisphere would require Hayabusa2 to fly lower than for a release over the northern hemisphere. Kent Yoshikawa from JAXA gave an interactive presentation at the International Astronautical Congress in 2019 titled "Hayabusa2 Operational Design and Evaluation of MINERVAII-1A/B Rovers Deployment" (abstract, video) that looks like it touched on those issues, but he doesn't go into much detail in that video; I guess you would have had to be there to ask questions.

Not the answer you're looking for? Browse other questions tagged rovers lander jaxa hayabusa2 ryugu or ask your own question.

3
What causes Hyabusa-2's close-up images of Ryugu to be dark in the corners?

9
What is JAXA looking for on the Moon in the way of 'potential utilization'?
12
What risk management options are available for Mars orbiters and rovers to mitigate threat of impacting with Siding Spring cometary debris?
2
Is the entire underside of Schiaparelli one big crushable-structure?
3
What causes Hyabusa-2's close-up images of Ryugu to be dark in the corners?
6
Nature of Hayabusa-2's "Home Position" relative to Ryugu? Is it Ruygu's L1?
5
What launch vehicle will be used for Exomars rover Rosalind Franklin?
9
How far will the debris cloud from Hayabusa-2's touch-and-go sample recovery travel around Ryugu? Will any have escaped to heliocentric orbit?
9
What are those plastic hoses on Perseverance used for?
8
What was it actually like driving the Lunokhod lunar rovers live from the ground? What were some of the biggest challenges?