As someone adviced me in a previous thread, I want to ask a question related to Can you refuel chemical rockets to increase the speed?.

If the numbers in this comment and this comment of @SteveLinton's answer are correct, why has SpaceX CEO E. Musk promised that their Big Falcon rocket, gross mass 4,300 tons, with two stages and payload 100 tons (after refueling in orbit) can shorten trip to Mars to 3 months?

Is this physically possible with this rocket?

To start with a summary: (1) the extra delta-V needed to halve the journey time is not as much as you think and (2) the SpaceX mission plan is, effectively, a really, really huge launch from Earth.

To expand on the first point, we need to look a bit more closely at how interplanetary travel actually works. There are lots of discussions on stack exchange (and elsewhere) which explore this. For instance this one which includes a very useful diagram, from which I take most of my information.

Launching from Earth it needs a delta-V of about 9.4 km/s to get into Low Earth Orbit (LEO) (a stable orbit a couple of hundred km up).

Once in orbit, a further boost of about 3.2 km/s will break you free of Earth's gravity. If a rocket applies that boost, it will enter an orbit around the Sun very similar to the Earth's and slowly drift further and further from the Earth.

To get to Mars, you need to boost still more, to change your orbit around the Sun into one which will meet Mars (as it goes around the Sun in its own orbit). This is actually a fairly small boost, about 0.6 km/s, but that gets you into an orbit which takes six months or more before it gets to Mars.

So to get to Mars sooner, you need to make a bigger change to your orbit around the Sun. The relationship between the boost needed to make that change and the time to get to Mars is not a simple one (and also depends on how long you are willing to wait to start, since Earth and Mars are also moving, opportunities come and go). It is usually visualised using something called a "porkchop plot". There is an online tool to calculate there here. Using that tool to look at departures in 2020 I get: 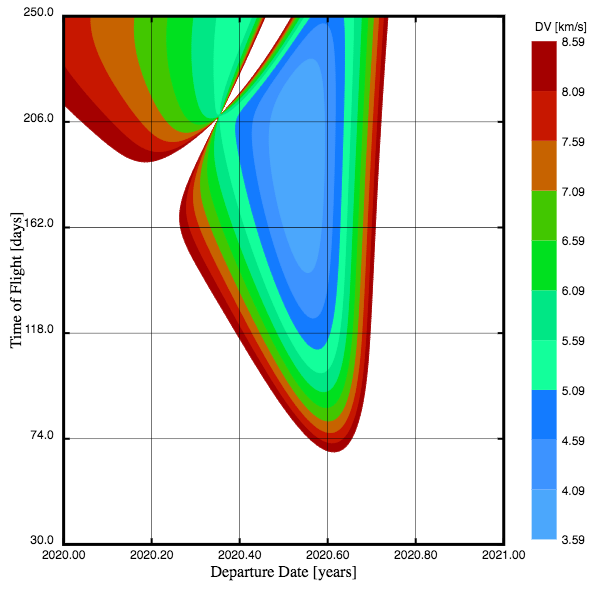 . So we can see, for instance, that the lowest delta-V transfer that year (middle of the pale blue area) takes about 6 months and leaves roughly in the middle of the year, with a delta-V required of about 3.6 km/s (I think that starts in LEO, but I'm not sure). On the other hand, the diagram also suggests that, for the right departure date you can get the transfer time down to 100 days or so, using a delta-V of maybe 5 km/s (if you use the online generator, you can hover over the diagram to get more detail of particular points).

Returning to the SpaceX plan, and my second point, their mission calls for about six or seven launches from Earth (one spaceship and the rest tankers) so the total mass launched is about 30000 tons. They end up with 100 tons of payload and about 600 tons of propellant in their BFS in Low Earth Orbit, a fairly reasonable ratio for achieving 5km/s of delta-V to send the payload onto a 90 day Mars transfer. At Mars they will presumably slow down by grazing Mars' atmosphere, although they will probably need some fuel for landing. They plan to make fuel there for their return journey.

Not the answer you're looking for? Browse other questions tagged rockets science or ask your own question.

24
Delta-V chart mathematics
5
Can you refuel chemical rockets to increase the speed?

17
How do we make a round-trip journey to Mars?
4
Is production of methane possible on Mars?
13
Why is (conventional) ramjet not used for 2nd stage of rocket propulsion?
1
What rockets are currently capable of carrying humans to Mars?
0
A way to go to Mars and come back
5
Can you refuel chemical rockets to increase the speed?
1
How much propellant is needed for a 1G continuous trip to the moon?
3
Could a fat rocket be used on Mars?