How does the star tracker in Voyager 1 lock onto a specific star?

How does the Voyager 1 star tracker lock onto a specific star and how reliable is it?

Are there approaches in more modern trackers used such as pattern recognition or other methods which would enable to track more stars to give more reliable fix and avoid problems if tracker mistakes one star for another?

The Voyager Attitude and Articulation Control Subsystem uses a sun sensor to point the high-gain antenna at the sun. This is simple: rotate the spacecraft until you find the brightest spot in the sky.
When this is done, the spacecraft's attitude is known in two of the three axes (X and Y). To fix the third axis (Z), the spacecraft rotates until its star tracker finds a star of a specified brightness. This third axis fix is needed because you want to be able to point the camera platform in the correct direction.

On Voyager 1, one of the star trackers failed. The failure analysis showed that components in the star tracker failed though a combination of manufacturing error and radiation. As a result, the star tracker reported an incorrect position, and the antenna wasn't pointed at Earth even though the spacecraft thought it was. Despite the link mentioned in the comments, the tracker did not lock onto the wrong star.

This was a pretty good solution given the limitations the Voyager team had to work with. They reduced their problem to finding a star of a specific brightness within a very narrow band of the sky, so they needed to store the brightness of just one star. The Voyager star tracking system used an analog computer, keeping this as simple as possible meant saving weight. Storing the position data of thousands of stars would have required carrying another tape recorder plus a digital computer to analyze the data.

Modern star trackers (e.g. Ball Aerospace, ESA) use a catalog that contains position data for several thousand stars. They check the relative position of a number of stars to eliminate errors. Here's a screenshot of a star tracking system on a high-altitude balloon: 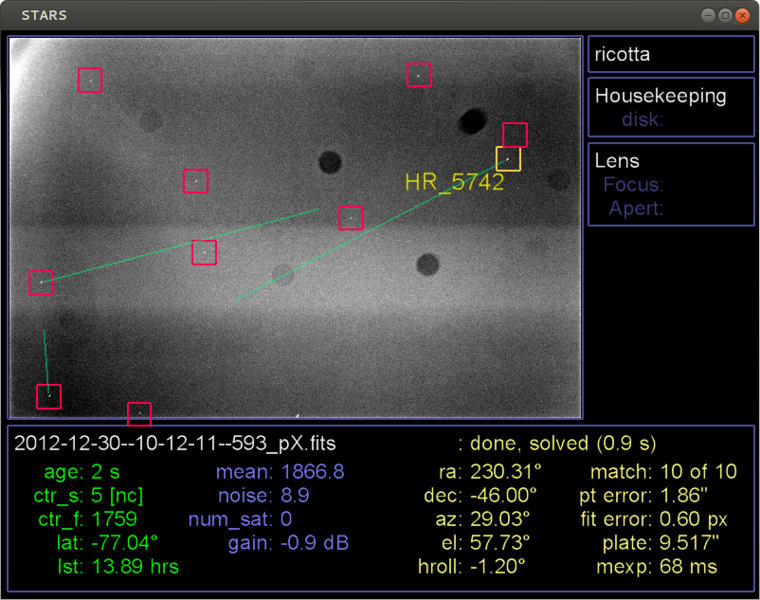 Not the answer you're looking for? Browse other questions tagged voyager navigation or ask your own question.

29
Could one of the interstellar probes discover Planet IX by accident?
21
How was magnetic tape decay prevented in Voyager 1?
12
How does a rocket navigate during launch?
5
How does Voyager 1 keep track of its orientation?

40
How does Voyager 1 send signals to Earth?
20
How did NASA determine the distance and velocity of voyager 1?
30
For how long will the Voyager records remain playable?
7
How much power does the Voyager radio dish draw?
29
Does the tape recorder on Voyager-1 still work?
5
What determines if a star tracker blends two stars that are close to each other?
2
Does Venus have a north star or south star?
6
How does Voyager take pictures in space?
5
How does Voyager 1 keep track of its orientation?
9
How did the star tracker on the Corona (Key Hole) satellite work?