How does SpaceX plan to deal with boiloff on the trip to Mars?

Both BFR booster and BFS are to run on Raptor engines, fueled with liquid methane and liquid oxygen - cryofuels.

The trip to Mars will take at least a couple months, and BFS requires fuel for powered landing. And cryofuels normally boil off over time - tanks so durable as to hold their vapor pressure would be too heavy for space. Not a critical problem for a mission that lasts a week or two, like a flight to the Moon, but arriving at Mars in several months and finding the tanks dry would be a problem...

So how does SpaceX plan to deal with it?

This is a really good question and the answer is probably not 100% known, even by SpaceX at this moment.

No doubt they will have some active cooling to minimize boil off.

Structurally there are tricks they can play. For example the landing fuel is stored in a smaller tank, which is submerged in the main tank. Thus the surface area to warm up over is seriously reduced.

You can see that in this image from the 2017 ITS design: 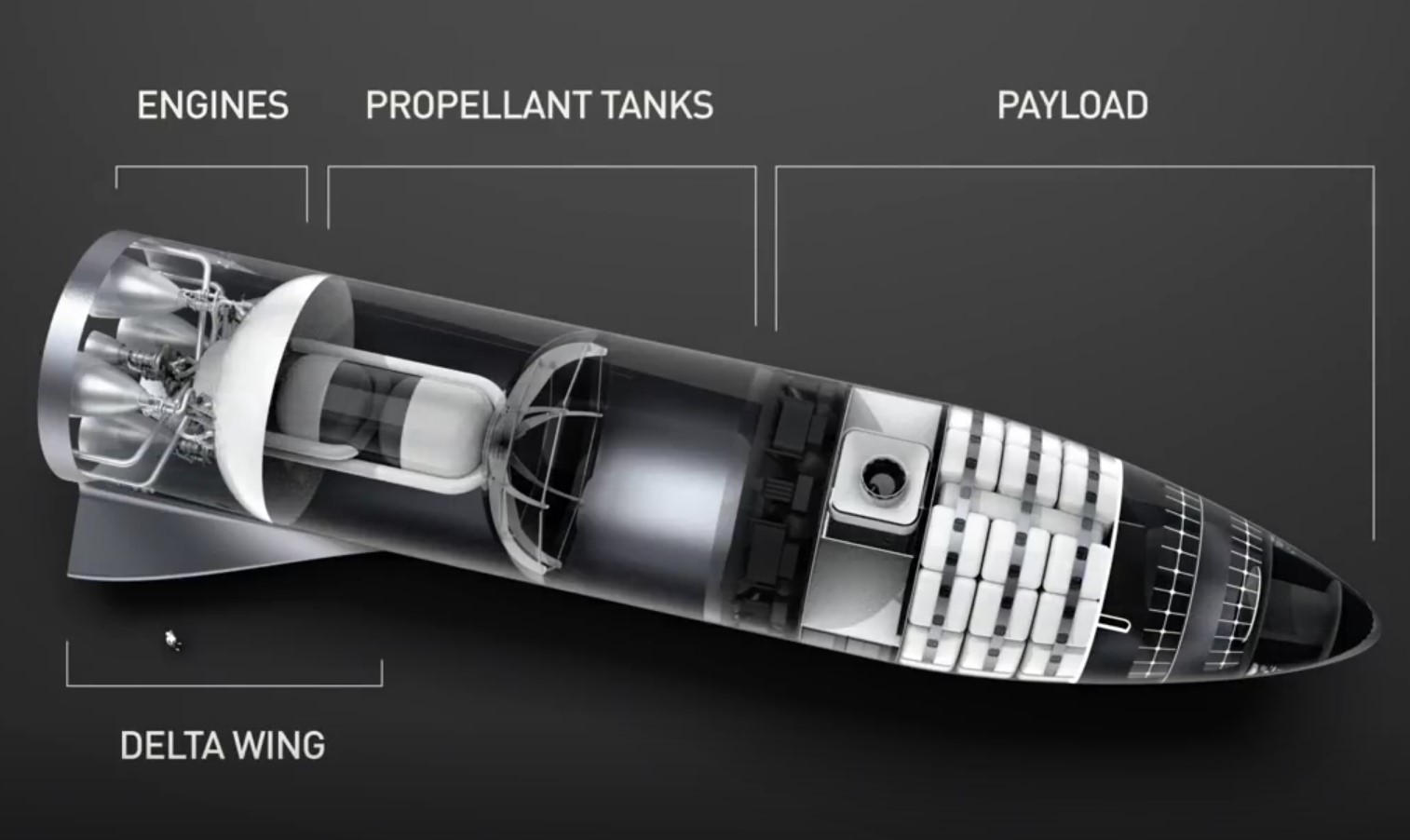 In the section labelled Propellant Tanks, there is a smaller set of tanks inside.

I expect we will see many changes to the design before the first flight, for this and many other reasons.

I think the most important factor in avoiding boiloff is Not Using Hydrogen.

The atmospheric boiling points of the chosen propellants are as follows:

Space is a place of temperature extremes: roasting in the sun, but pretty cold in the shade. https://en.wikipedia.org/wiki/Moon gives a minimum (presumably night time) temperature at the lunar equator of 100K, and 35K in some polar craters. These temperature figures suggest it should be theoretically possible to keep an unmanned spacecraft at around 100K with a simple sunshade, which would enable methane to be kept liquid indefinitely at slightly below earth atmospheric pressure and oxygen at slightly above earth atmospheric pressure.

Hydrogen is traditionally considered the best upper stage fuel, despite requiring large tanks due to its low density, because of the exceptional specific impulse it achieves. It would have been simpler to generate hydrogen propellant on Mars than methane as it would only require a water electrolyser without the additional step of the Sabatier process to convert hydrogen and carbon dioxide into methane. But after considering hydrogen briefly in the earliest stages of Raptor engine development, SpaceX quickly abandoned it and I suspect that the main concern was boiloff on long duration missions.

Other than choosing not to use hydrogen, I doubt that Spacex have given a lot of thought to the issue of avoiding boiloff on Mars missions yet. While the figures above show that it is theoretically possible to keep the chosen propellants liquid without an active system, there are many factors to be considered and I believe some active systems will be required. An entirely passive system would probably require the ship to be pointed directly towards/away from the sun in order to keep the sunshade down to 9m diameter, and that may be unacceptable. Also the crew area will need to be considerably warmer than the propellant tanks and some heat may leak through. As Geoffc has noted in his answer, small inner tanks for containing the landing propellant (which among other things would help reduce the insulation requirements) have appeared in some of Spacex's designs.

Note that the James Webb Space Telescope will maintain a temperature of 50K apparently by only passive means: a sunshade, plus being positioned at the earth-sun lagrangian point L2 which means it will be permanently in Earth's shadow (as far as I can tell the earth is a little too small to fully eclipse the sun at this distance.)

Not the answer you're looking for? Browse other questions tagged spacex liquid-fuel cryogenics spacex-starship its or ask your own question.

2
ULA's plan for LH2/LOX 2nd stage that can maintain propellant for an extended period of time?
2
How might an internal combustion engine generate substantial external thrust?