The routine uses the NORM assembly instruction, which, according to its documentation left-shifts the number in the accumulator ("MPAC" register), until it ends up with a value $\geq {0.5}$ and "nearly $1$"[1], and writes the number of shift operations performed into the memory location specified as its second argument (the mathematical meaning of the left shift operation is binary exponentiation $2^n$, exponents in the argument of a logarithm can be expressed as factors and products in the argument can be expressed as additions, so the simplification of $ln(2^c \cdot scaled)$ into $c \cdot const + ln(scaled)$ works, where $c$ is the shift count and $const$ is the precomputed value of $ln(2)$).

Then it uses a polynomial of third degree to approximate $ln$ in that interval, with hardcoded coefficients[3]: 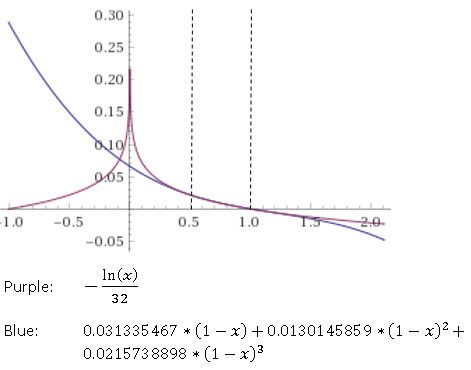 Eventually the shift count obtained earlier is multiplied back in (times the 0.0216608494 constant[2], using SHORTMP).

[1] the storage format for a double precision number was built from two 16 bit words where the MSB of each is the sign and forms a one's complement representation of the range $-1 < x < 1$ but the LSB is a parity bit. So we deal with a 30 bit format containing two sign bits, causing some headache for emulator implementation.

[2] the ACG assembly language permits CLOG2/32 as an identifier name. This caused some more headache for emulator implementation.

[3] how were the coefficients found? Code comments on the assembly listing of the interpretive trignonometry module (yes, astronauts could make the ACG interpret dynamic instructions) suggest that the method was based on works by C. Hastings, especially Approximations for Digital Computers. Princeton University Press, 1955. The most complex polynomial of that kind in ACG is one of seventh order, same module, to compute $arccos(x) \approx \sqrt{1-x} \cdot P(x)$). 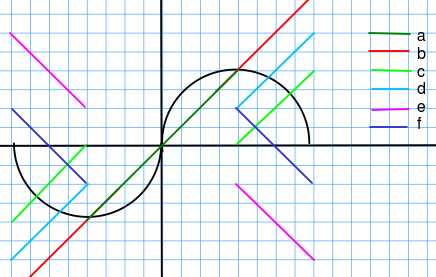 26
Why would such a powerful computer (or a computer at all) be needed to go to the Moon?
39
Given small computational resources, how was navigation implemented? (Not samples of old guidance software)
23
How did the Apollo guidance computer handle parity bit errors?
8
How does the Apollo LM ascent guidance program P12 actually work?
2
Arcustangent function of the Apollo Computer, atan() or atan2()?