Has a spacecraft ever used a four gimbal gyroscope? Did Michael Collins get his Christmas wish?

Now I’ve only made this gyroscope with two sets of gimbals, But a real system would need three; pitch, roll and yaw. But none-the-less gimbal lock still remains a problem, although it can be eliminated by some clever electronics, and a fourth gimbal set.

Question: Has a spacecraft ever used a four gimbal gyroscope? 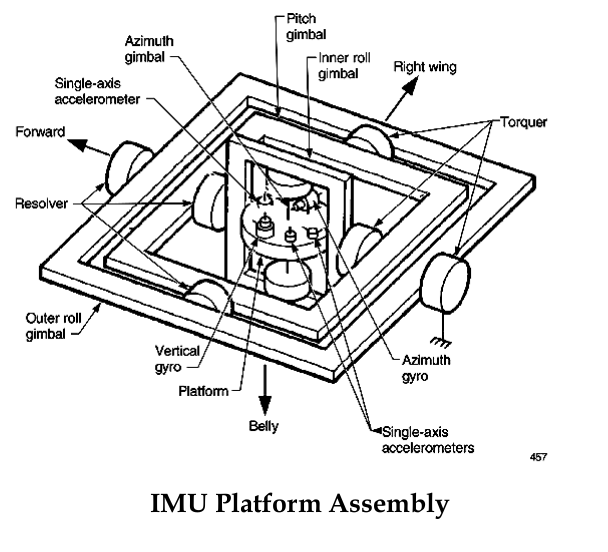 The IMU consists of a platform isolated from vehicle rotations by four gimbals. Since the platform does not rotate with the vehicle, its orientation remains fixed, or inertial, in space. The gimbal order from outermost to innermost is outer roll, pitch, inner roll, and azimuth. The platform is attached to the azimuth gimbal. The inner roll gimbal is a redundant gimbal used to provide an all-attitude IMU, while preventing the possibility of gimbal-lock (a condition that can occur with a three-gimbal system and can cause the inertial platform to lose its reference). The outer roll gimbal is driven from error signals generated by disturbances to the inner roll gimbal. Thus, the inner roll gimbal will remain at its null position, orthogonal to the pitch gimbal.

Gemini had a four-gimbal system as well:

The IMU is the usual gimballed stable platform with accelerometers and angular resolvers as in Apollo, except for a key difference that the Gemini IMU had four gimbals rather than the three gimbals of Apollo. This means that it was not subject to the phenomenon of "gimbal lock", and hence the software used to adjust spacecraft alignment could be simpler than with three gimbals. The value of the 4th gimbal can be appreciated when considering incidents like the mishap in Gemini VIII in which an uncontrolled roll occurred. (If the IMU had had only three gimbals, my understanding is that gimbal lock would have occured when the roll angle was too great.) On the other hand, at that point the spacecraft was under manual control anyway, and I'm sure that the notion that the IMU would have to be realigned later would have been the least of Neil Armstrong and Dave Scott's worries.

Surprisingly, because of the long lead time required for Apollo development, and the position of Gemini as a second-generation improvement over Mercury, there are a handful of features in Gemini that are more sophisticated than their Apollo equivalents. I don't know if this is one of them, or if a 4-gimbal system was considered and rejected for Apollo due to weight considerations.

How Apollo Flew To The Moon suggests it was mainly a weight-driven decision, but also notes that the three-gimbal solution is more accurate:

[Susceptibility to gimbal lock] was inherent in the system as designed by the MIT team who had settled on a three-gimbal mounting for the platform, similar to the system they had designed for the Polaris missile, and unlike the four gimbals found in the Saturn V instrument unit and the Gemini spacecraft. Collins was a veteran of Gemini, and knew the advantage given by the fourth gimbal. But there were good, solid reasons for implementing only three gimbals. As well as saving the weight of a heavy outer gimbal, trade-offs included a reduced tendency for the platform to drift in its orientation, and greater accuracy.

Not the answer you're looking for? Browse other questions tagged adcs or ask your own question.

16
Did Michael Collins ask for a fourth gimbal for Christmas? Is there a recording or transcript?