Why is the Sokol spacesuit considered inadequate for EVA?

According to the Wikipedia article on the Sokol spacesuit,

The Sokol space suit (Russian: Cокол, Falcon) is a type of Russian space suit, worn by all who fly on the Soyuz spacecraft. It was introduced in 1973 and is still used as of 2013. The Sokol is described by its makers as a rescue suit, and it is not capable of being used outside the spacecraft in a spacewalk or extra-vehicular activity. Instead, its purpose is to keep the wearer alive in the event of an accidental depressurisation of the spacecraft. 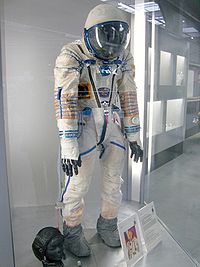 The KV-2 variant of the Sokol space suit.

What about the suit makes it not usable during EVA? Would wearing the suit during EVA mean instant death, or would it just mean increased risk?

The suit does not contain its own life support system. It is ventilated from a blower or, in case of a decompression, pressurized bottles within the spacecraft. It also does not have any meteoroid protection, and it tends to balloon when pressurized, restricting movement.

Not the answer you're looking for? Browse other questions tagged spacesuits eva sokol-spacesuit or ask your own question.

5
Why is the Sokol suit white instead of safety orange?

21
Would the blast clearing technique used in snorkeling work in an EVA situation?
14
Could an EVA Suit meant for Mars be used for EVA on another celestial, or vice-versa?
16
Do American astronauts wear Sokol space suits when flying on a Soyuz?
13
What are the consequences if an astronaut's helmet gets damaged during a spacewalk?
27
What does "double vacuum pressure" mean in space-suit testing?
4
Why were EVA suits never silver?
14
Are SpaceX new space suits inferior to existing ones in terms of usability?
3
What was the first Soviet/Russian spacesuit to use closed-loop ventilation?