Is there any written evidence of NASA being under pressure to launch prior to the Rogers Commission asserting it in February, 1986? [closed]

I asked that question of the NASA administrator, James M Beggs and got the following response.

JRG: Jim a lot has been made of the fact that NASA management made poor decisions regarding the Challenger launch due to being under extreme pressure to meet a launch schedule. Did you feel pressure to launch?

JMB: Only mildly. No more than I felt with GD (General Dynamics). Every organization has a production goal they are working towards, that creates pressure to reach that goal. We could have flown 10 flights in 1986 and the President and Congress would not have objected.

JRG: What was your biggest concern regarding flights in 1986?

JMB: We were struggling to find enough payload to fill out the flights. Flight crews and Mission Specialists were easy, we had a long line of people wanting to go up. The problem was the shuttle was designed primarily as a payload vehicle not a passenger vehicle.
The Air Force had demanded we make 12 flights a year available to them and they only had enough cargo for 3 or 4 a year. Commercial payloads were a big focus, but took time to develop. Some flights at the end of 1985 flew with less than half of the payload they could have carried.

JRG: So the NASA you lead faced the same challenges as a private airline. Have enough available capacity to meet customer demand, but not schedule so many flights that you can’t effectively fill them.

JMB: Right, Pan Am was handling some of our manifesting, so that is pretty accurate.

Does anyone have documentation of NASA officials or the press speaking of pressure to launch, prior to the Rogers Commission creating that story?

I had hoped that someone could provide a piece of evidence to support this claim. It appears that it is in fact a “myth” created by the Rogers commission. The first appearance I can find of the “Under Pressure” theory (although maybe Queen was referring to NASA in their song) is an article in the Washington Post on 2/9/86.

Why would the Commission create a theory that NASA (and MTI management) was under extreme pressure to launch when none of the Challenger decision makers felt that they were?

The tests showed the following: 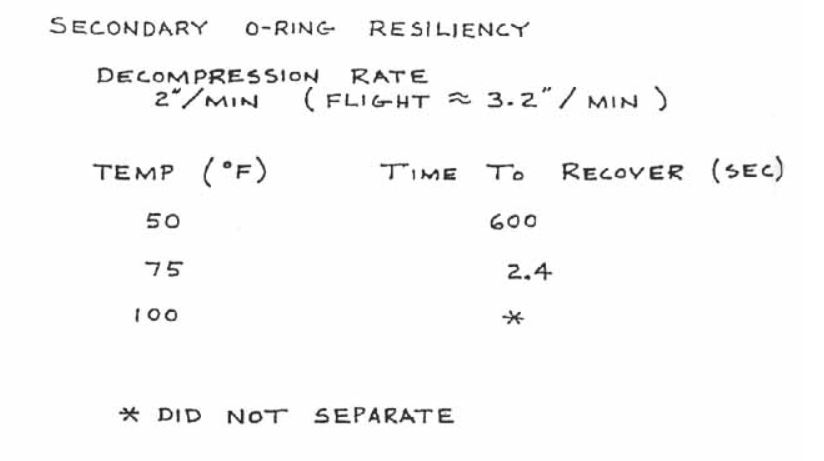 This data leads to the common sense conclusion that as the O-ring gets colder it takes significantly longer to seal. It was then assumed that this property had “some significance” in the accident.

This data provides a second more important conclusion for anyone with a basic understanding of SRB joint dynamics. A SRB joint must obtain a good seal in the first 400 milliseconds after ignition or it will suffer a catastrophic leak. This test data indicates that if the joint relied on O-ring resiliency as the method of sealing then every joint under 75F would fail to seal before 2400 milliseconds. Since 21 of the first 24 flights were under 75F and none of them failed, it is clear that some other method beside O-ring resiliency was the primary method of sealing the SRB joint.

Bob Lund and the other MTI managers knew this and rejected the cold O-ring theory, not because of pressure to launch, but because the data presented did not support a conclusion that a SRB leak would occur. The only reasonable conclusion you can draw from the data presented was the O-ring resiliency had nothing to do with SRB joint sealing below 75F.

The answer to this question is: NASA and the MTI managers were, as they stated, under no pressure to launch. They looked at the data presented which predicted a failure because of cold O-ring function and PROPERLY rejected it as a false conclusion

Unfortunately for them, others with much less understanding of SRB joint dynamics, picked up the same data and made this false conclusion an obvious “fact”.

32
Why didn't NASA use the shuttle to make a profit?
18
Before the Columbia accident, were there shuttle manifests/plans for after ISS assembly complete?
3
What are NASA's dozen payloads for the Moon that will be ready for launch by the end this year? (2019)
4
Payload Specialist Training
12
Was there any period of time when other U.S. launchers were abandoned in favor of the Shuttle?
18
After the loss of Challenger, why weren’t Galileo and Ulysses launched by Centaurs on expendable boosters?
7
Was this 1969 space shuttle feasiblity study too optimistic?
9
Why did Columbia’s planned flight manifest have a five-year gap with absolutely nothing in it between 2004 and 2009?
3
Could DOD earth observation (i.e. spy) satellites have photographed the Columbia Orbiter on STS-107?