Nature of Hayabusa-2's "Home Position" relative to Ryugu? Is it Ruygu's L1?

This tweet "from Hayabusa-2" via JAXA shows the diagram below, which seems to suggest that the Hayabusa-2 spacecraft tends to remain between the asteroid Ryugu and the Sun. Does Hayabusa-2 have to fight significant gravitational effects in order to stay there rather than orbit the asteroid, or at about 20 km is gravitation from the asteroid just a very small perturbation? Or is it more complex than that?

If they are just on similar heliocentric orbits, then how could the spacecraft stay between it and the Sun?

Could it be somewhat stabilized there due to gravity? Perhaps this is near the Sun-Ryugu L1 point?

Text and one of the images of the tweet:

While Hayabusa2 normally hovers at the home position, for the BOX-B “tour” operation, the spacecraft swung round to see Ryugu’s south pole and evening side. http://www.hayabusa2.jaxa.jp/en/topics/20180927e_BoxB/ … 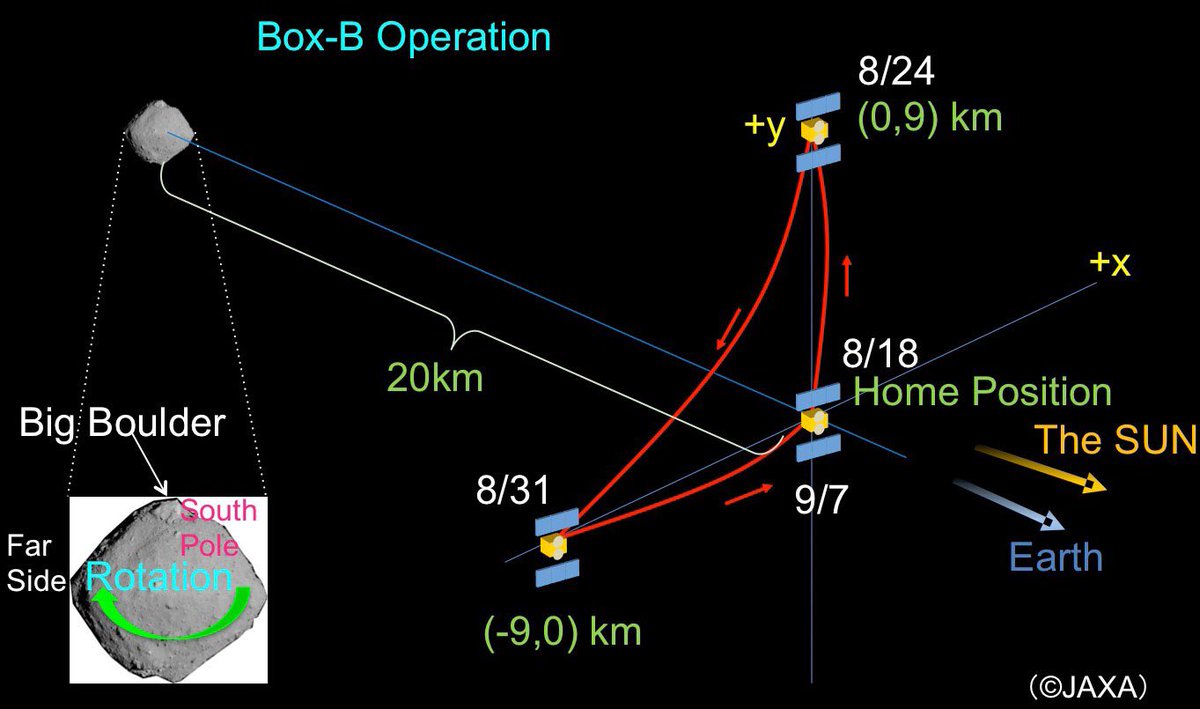 Hayabusa2's Home Position, also known as BOX-A, is a cubic region approximately 1km in size, 20km above Ryugu and directly on the Ryugu-Earth line.

We can show that the Home Position is not at any Lagrange points just by checking where they would be for Ryugu. The Hill radius of an object mass $m$ in orbit with semi-major axis $a$ around a body mass $M$ (the Sun) is given by:

which gives us ~75km. The L1 and L2 points are found approximately at the edge of the Hill sphere, so we can see that Hayabusa2 is dominated by Ryugu's gravity. Note - Ryugu has a relatively high eccentricity so the Hill radius varies significantly over time, but the mean is around 75km.

However, dominated is a strong word for Ryugu's influence on the craft - at the Home Position the radial acceleration from gravity is some $7.5\times10^{-8} ms^{-2}$ or just $0.28 mms^{-1}h^{-1}$. This makes conventional orbital manoeuvres impractical/unusable so Hayabusa2 can be considered to be co-orbiting with Ryugu rather than in orbit of it.

The reasons behind the positioning are all essentially down to this lack of a strong gravitational field and, perhaps more importantly, the fact that prior to the mission the strength and shape of the field wasn't known with much certainty. For example, in this presentation in the lead up to Hayabusa's arrival JAXA gives an 8-fold uncertainty in Ryugu's density and gives its mass as 1.7 × 1011 kg – 1.4×1012 kg!

For the above reasons, the initial approach and subsequent weeks were spent executing very careful manoeuvres to better map Ryugu's gravitational field in preparation for later surface activities. Since these manoeuvres couldn't be planned precisely in advance, the Ryugu-Earth line was used as the basis for the coordinate system for simplicity. The Ryugu-Earth and Ryugu-Sun pair define the Z-X plane - see here for more detail.

The 20km separation essentially gives a 'safe' position from which to operate. We can show that the time-to-impact in freefall from this distance is approximately 6.5 days:

This uses the simplification that Ryugu's radius is 0 to get an approximation which is good enough for our purposes since the full formula is too messy for here! I also ignore the perturbation from the Sun which is small but not insignificant.

This of course means that ground teams have plenty of time to correct any drift due to the failure of the autonomous navigation system or signal drops. For reference this would give a drift of only 50cm over the course of an hour.

Hayabusa2 has a chemical propulsion system used for attitude control and manoeuvring at the asteroid. This consists of a set of 12 20N Hydrazine thrusters which can provide an acceleration of ~$0.1ms^{-2}$ - plenty enough to counteract any drift caused by Ryugu's gravity.

JAXA's website provides good up-to-date presentations from press releases on Hayabusa2 here at the bottom of the page.

I use 4.5E11kg for Ryugu's mass which is up-to-date, but the reported value still has a large relative uncertainty. My value for Ryugu's diameter is 850m which is approximately its mean diameter but the true value obviously varies substantially.

Not the answer you're looking for? Browse other questions tagged orbital-mechanics lagrangian-points jaxa hayabusa2 or ask your own question.

4
How much delta-v would Hayabusa-2 need per day to remain 20 km sunward of Ryugu?
2
Tracking OSIRIS-REX
2
How low does OSIRIS REx's record-setting orbiting around Bennu go?
1
Diagram of Hayabusa 2 in "Hill Coordinate System"; what is that exactly? How to convert it to inertial?

3
How could JAXA not know when Hayabusa2 will arrive at asteroid Ryugu?
2
What criteria was used to select potential landing sites for Hayabusa-2's rovers on Ryugu?
3
What causes Hyabusa-2's close-up images of Ryugu to be dark in the corners?
4
How much delta-v would Hayabusa-2 need per day to remain 20 km sunward of Ryugu?
2
How does Hayabusa-2's "Communication Simulator" on its website work? What does it show?
9
How far will the debris cloud from Hayabusa-2's touch-and-go sample recovery travel around Ryugu? Will any have escaped to heliocentric orbit?
5
How far did Hayabusa-2 back off before the "bomb" went off?
11
Why did Hayabusa-2's capsule's parachute have transparent panels?
0
How did Japan’s Hayabusa 2 mission "make extensive use of deployable cameras to get scientific imagery"? Did it ever produce a "PR selfie"?