Where can I read further on the specs the South Korean engine for next month's sub-orbital test?

South Korea to test first-stage engine. The Korea Aerospace Research Institute says it is making progress on its first indigenous rocket, the KSLV-II, which could be ready for flight by 2021. The agency has announced that the next step will come between October 25 and 31, when it performs an in-flight test of a single kerosene-fueled engine. During the test, the single-engine booster is expected to reach an altitude of about 100km for a suborbital flight, Yonhap reports.

An important test ... The current design for the KSLV-II rocket calls for four of these engines to power the first stage and a single engine for the second stage. With this program, South Korea seeks to develop a low-cost booster capable of lifting up to 1.5 tons to low-Earth orbit. The government hopes to use it for its own purposes, as well as make it available for commercial launches.

SEOUL, Sept 16 (Yonhap) -- South Korea plans to conduct the first test flight of its locally developed booster engine at the end of next month, the ICT ministry said Sunday, as part of a long-term effort to produce the Korea Space Launch Vehicle-2 (KSLV-2), a three-stage rocket.

The single-stage rocket, with a 75-ton thrust engine, developed by the Korea Aerospace Research Institute (KARI) is set to be launched between Oct. 25 and Oct. 31 from the Naro Space Center in Goheung, South Jeolla Province, the Ministry of Science and ICT said.

It said the launch date has been set after examining all variables and that related countries and agencies, such as the International Civil Aviation Organization and International Maritime Organization, will be notified in advance

"Barring any unforeseen developments, the launch should take place on the primary date of Oct. 25," the ministry said.

The rocket will fly for about 10 minutes, during which the performance of the new engine, control system and other parts will be monitored, the ministry said. It is expected to attain a sub-orbital altitude of over 100 kilometers some 160 seconds after launch and reach its apogee 300 seconds into the flight, before hitting international waters between South Korea's Jeju Island and Japan's Okinawa Island.

Question: Where can I read further on the specs the South Korean engine for next month's sub-orbital test?

A reverse image search from the graphic in the Yonhap article lead me here to a larger version of the image but I can't read the article. I don't even know the name of the engine, in any language. 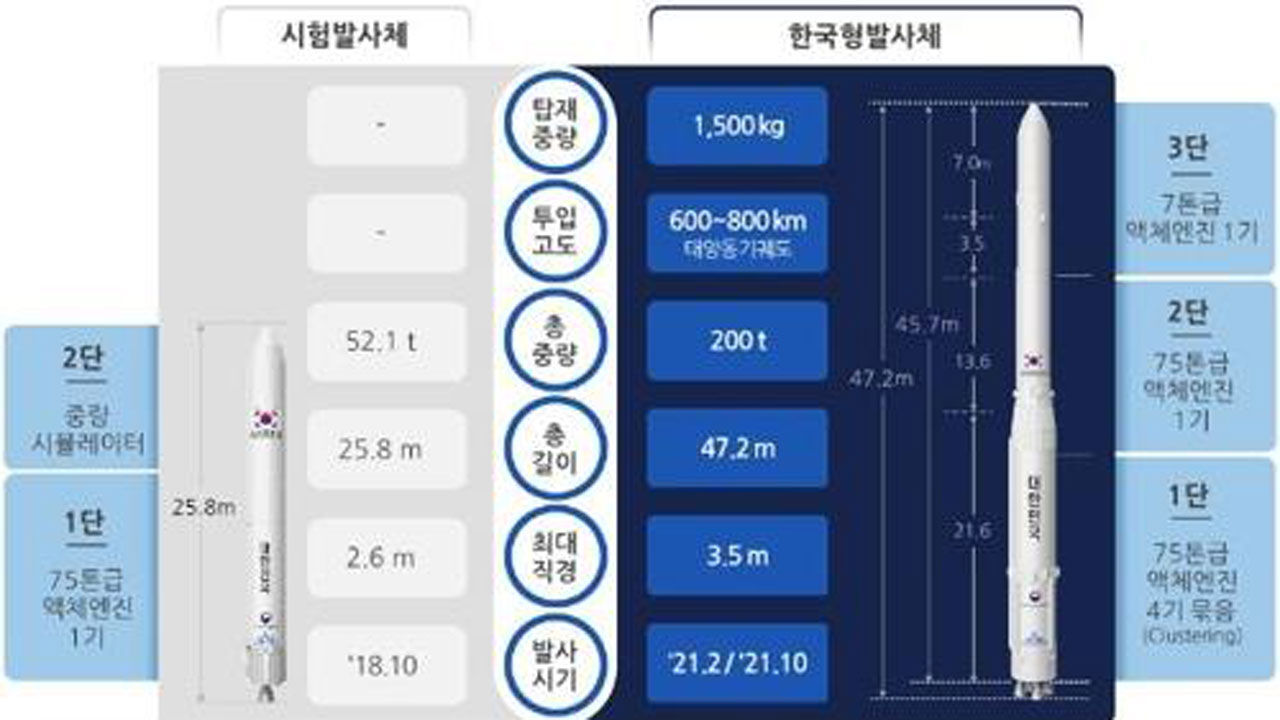 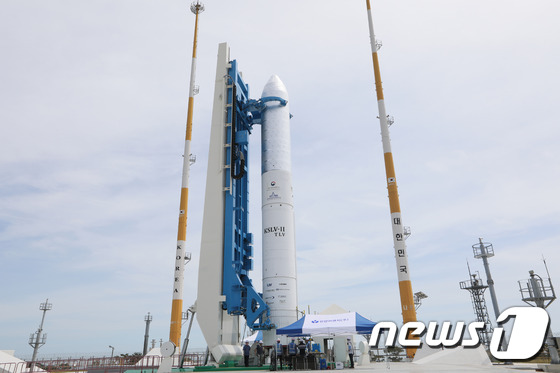 Gunter's Space Page calls the engine KARI-75 ("Korea Aerospace Research Institute 75-ton"), but that name may actually come from some rando on nasaspaceflight.com.

Spaceflight101 says it's open cycle, gas-generator, 655kN at 298 sec Isp at sea level for the first-stage version; extended bell for the second stage version bringing it to 325 sec in vac, but the math there works out to ~715kN rather than 740.

Astronautix' information on the KSLV family appears to be dated, referring to old plans to base the launchers on the Russian Angara; the current design is "completely indigenous" according to SpaceTech Asia.

A white paper from KARI published by AIAA includes photos of the 75-ton and 7-ton development engines: 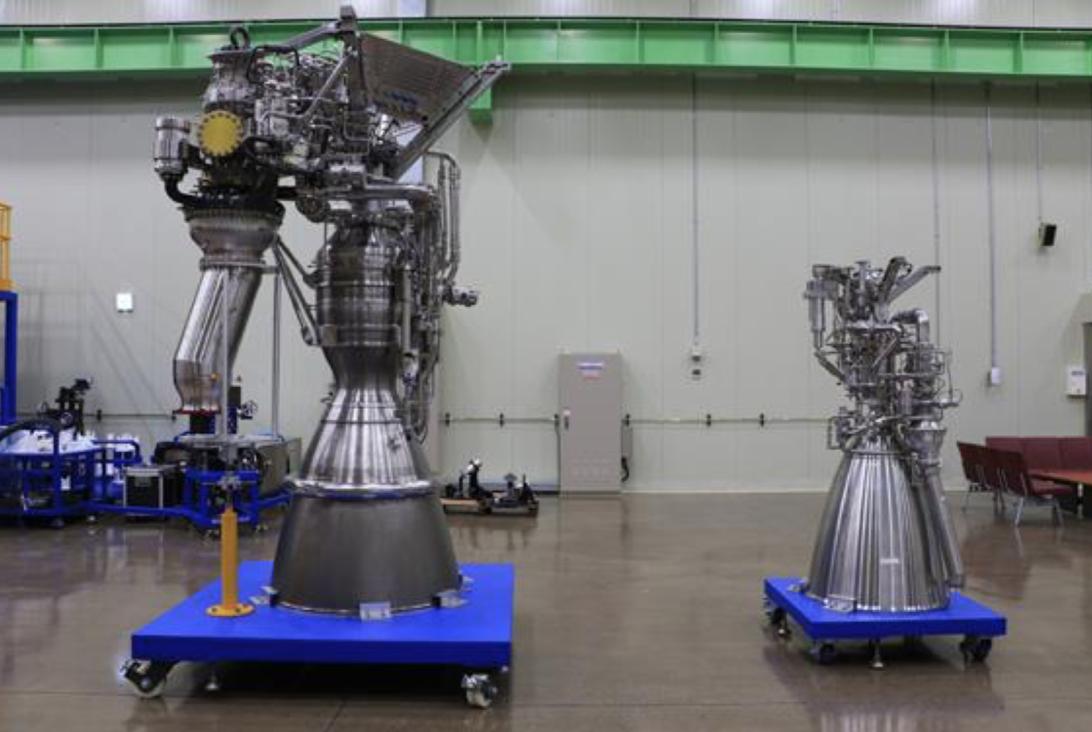 Here's a video of a 75-second static fire of the engine -- make sure your speaker volume isn't up too high.

It looks like there is a test of KSLV-II in the next few weeks (late November 2018):

It looks like there are several launch windows between November 28 and December 4. It also confirms that the one engine, with 75 tons of thrust will be tested in the Korea Space Launch Vehicle-2 Nuri on a ten minute sub-orbital flight, and that the Korea Aerospace Research Institute is developing the KSLV-2 to be able to put a 1.5 ton satellite in orbit by 20201.

Also watch: South Korea to test launch domestically-reproduced rocket on October 25 which says the launch will pass 100 km at about 160 seconds and reach perigee at about 300 seconds. It also confirms that the final KSLV-II will use 4 engines on the first stage and one on the second stage.

In another KARI video discussing the expense of testing (YouTube allows auto-translated captions with very limited accuracy) there is an animation that may provide engine-savvy people some further insight. 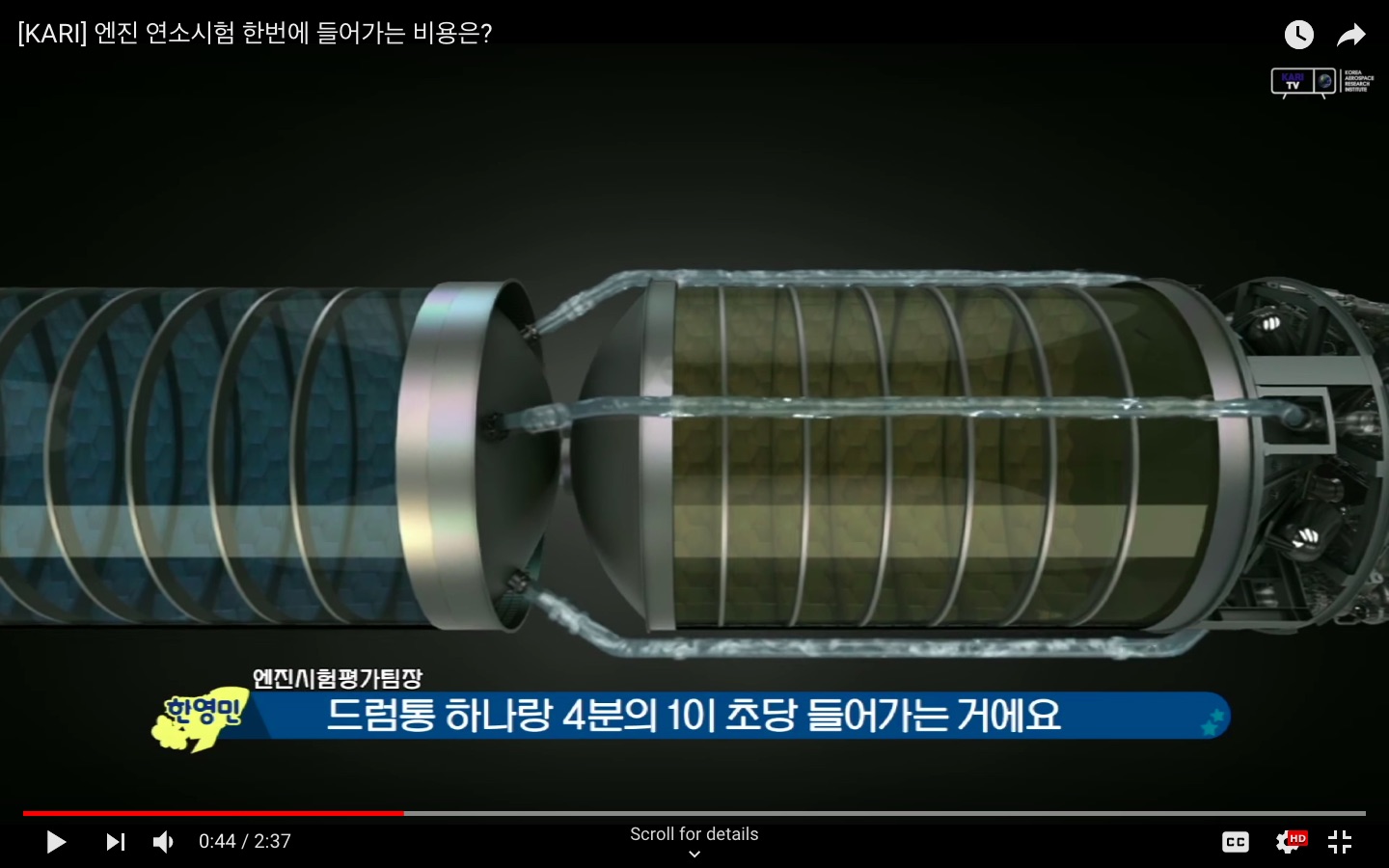 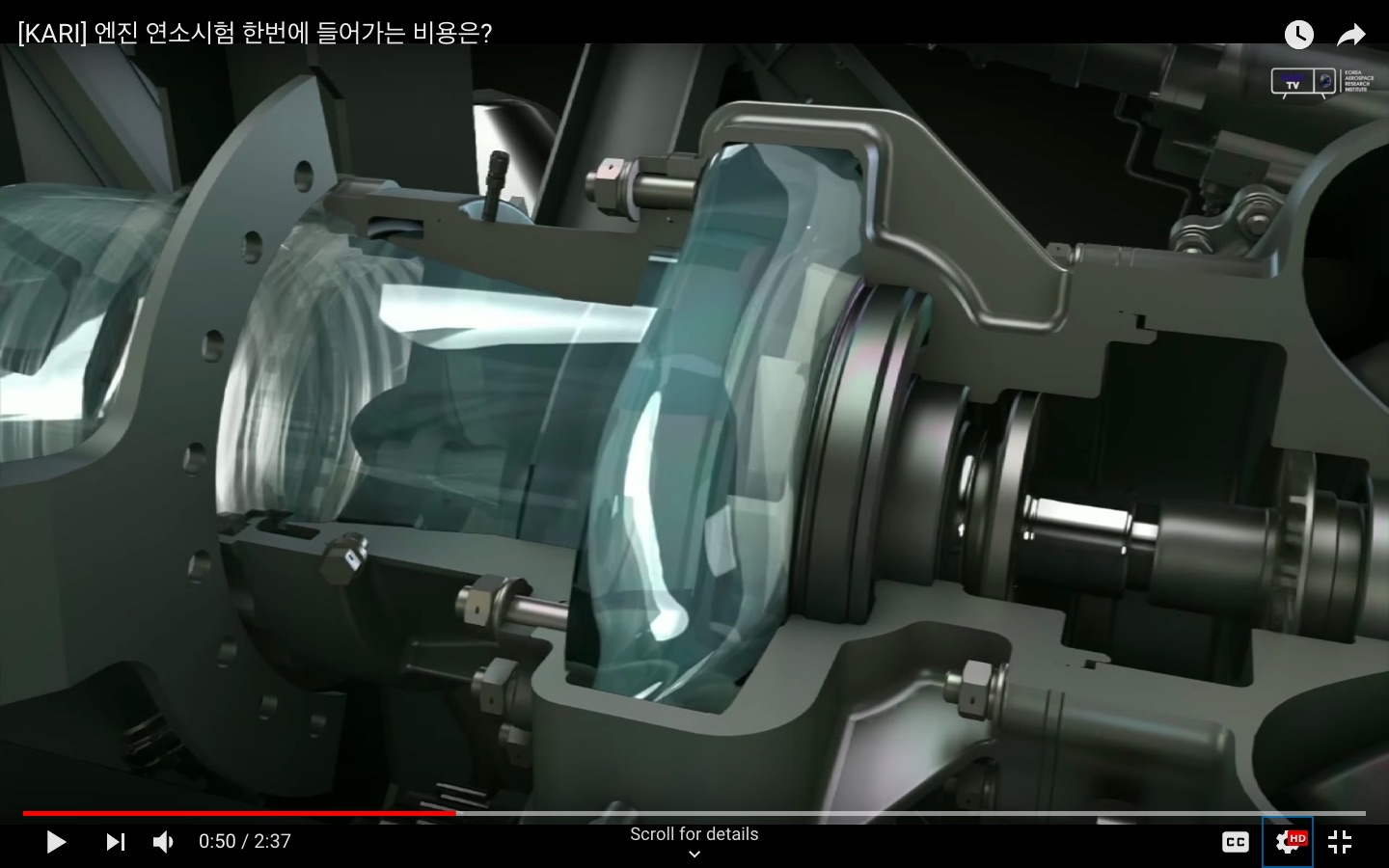 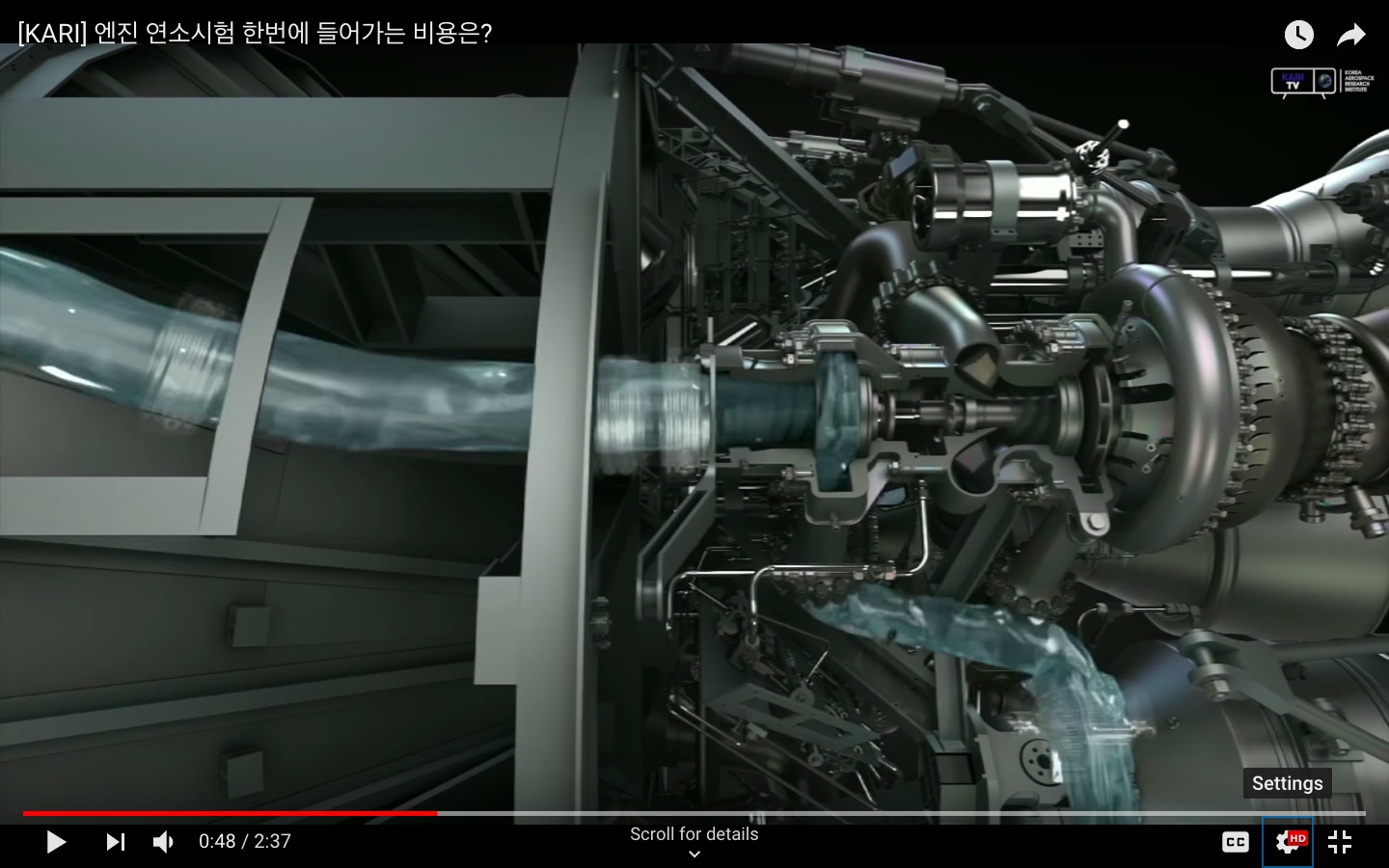 Not the answer you're looking for? Browse other questions tagged engine-design engines korea-aerospace-research-institute or ask your own question.

15
Changes made to ISRO GSLV-D5's CUS and FBTP since GSLV-D3's LH2/LOX CUS failure to sustain ignition?
2
What replacement engine options are there for Antares?
2
Why is there such a long delay in between test firing and launching the SLS engine No. 2059?
1
What fire will Firefly fly, and when? (update/clarification on planned launch vehicle)
22
Why was the engine of the launch vehicle recently tested in Iran "not a very good missile engine"?
10
Why could the Lunar Ascent Engine be used only once?
4
Are there any rocket engines in current or former use that aren’t normally restarted in flight, but have the capability for an emergency restart?
5
Longest static fire?
2
What expansion ratio is the best for mars surface level engines?
7
KARI's homegrown KSLV-II almost hit the target orbit on its very first launch. How many OLVs can boast success on the first flight attempt?