What risk management options are available for Mars orbiters and rovers to mitigate threat of impacting with Siding Spring cometary debris?

I was reading this article on New Scientist titled Fiercest meteor shower on record to hit Mars via comet. Long story short, the Oort cloud comet C/2013 A1 Siding Spring is predicted to near-miss Mars to within 173,000 kilometres from its surface and can get as close as 89,000 kilometres on 19 October 2014.

In astronomical terms, this is a close shave and cometary debris field radius can easily stretch many times this distance, putting debris of various size and composition on a collision course with Martian surface and intersecting orbits of man-made satellites of Mars, such as ISRO's Mars Orbiter Mission and NASA's MAVEN orbiter that will be both there for the occasion.

Additionally, some of this cometary debris might be large enough to survive their entry into Martian tenuous atmosphere and impact the Martian surface. This would depend on how large chunks of the comet would chip off it prior to Periareion (Martian periapsis) and their composition, but it wouldn't be unheard of that a comet breaks up in large chunks due to gravitational stresses as it approaches another celestial body. Comet Shoemaker–Levy 9 springs to mind, but there are numerous other examples.

So while Bill Cooke of NASA's Marshall Space Flight Center in Huntsville, AL said for the mentioned article:

"If I could have my druthers, I'd love to be on the surface of Mars for this event," says Cooke. "It will probably be the most intense meteor storm on record."

Speaking of personal preferences, I honestly rather wouldn't. I guess it's easy enough to say something like that when you know you won't be there, but if the debris will be large enough to impact the ground as numerous micrometeorites, it's not really a matter of simply remembering to bring along one's umbrella. Sentences like "potentially millions of meteors per hour" and "between 1000 and 10,000 times the density of space rocks that are normally present in low Earth orbit" don't sound too good either.

So, with some such astronomical events clearly presenting a significant risk to ongoing missions to other Solar system celestials that it might be worth doing something about it, and since some of these events can be predicted to a certain degree, my question is:

How could NASA and other space agencies that have or will have orbiters and rovers on and around Mars at the time of such events mitigate risks involved? What risk management options do they have available to them in an event of heightened risk of impacting with cometary debris? Would it be possible to redirect orbiters into less risky orbits, reorient them to face the impacting debris with hardened side of the orbiter, or instruct rovers on land to drive to a sheltered area?

Our plans for using spacecraft at Mars to observe comet Siding Spring will be coordinated with plans for how the orbiters will duck and cover, if we need to do that.

It's way too early for us to know how much of a threat Siding Spring will be to our orbiters. It could go either way. It could be a huge deal or it could be nothing -- or anything in between. How active will Siding Spring be in April and May? We'll be watching that, but if the red alarm starts sounding in May, it would be too late to start planning how to respond. That's why we're doing what we're doing right now.

So NASA is taking potential threat that comet C/2013 A1 Siding Spring might pose to Mars orbiters seriously, keeping close eye on it. At the same time, the mentioned press release dismisses chance that the cometary debris could pose a risk to two NASA's Mars rovers that are active on the surface, saying that while Martian atmosphere is thin, it is "dense enough to prevent dust from the comet from becoming a hazard".

For the three orbiters currently in Martian orbit (Mars Reconnaissance Orbiter, Mars Odyssey, and Mars Express) and two on their way (MAVEN and Mars Orbiter Mission) that will be there before the comet Siding Spring flyby though, threat might be more significant:

Two key strategies to lessen risk are to get orbiters behind Mars during the minutes of highest risk and to orient orbiters so that the most vulnerable parts are not in the line of fire.

Orbiters are designed with the risk of space-dust collisions in mind. Most such collisions do not damage a mission. Design factors such as blanketing and protected placement of vulnerable components help. Over a five-year span for a Mars orbiter, NASA figures on a few percent chance of significant damage to a spacecraft from the background level of impacts from such particles, called meteoroids. Whether the Siding Spring level will pack that much hazard -- or perhaps greater than 10 times more -- into a few hours will depend on how active it becomes.

Part of the risk management strategy is also assessing required maneuvers as soon as possible, to consume less fuel for any such orbit adjustments. That will depend on comet's reaction to crossing the Solar system's snow line at a distance of roughly 3-4 AU to the Sun, which will happen in April to May 2014: 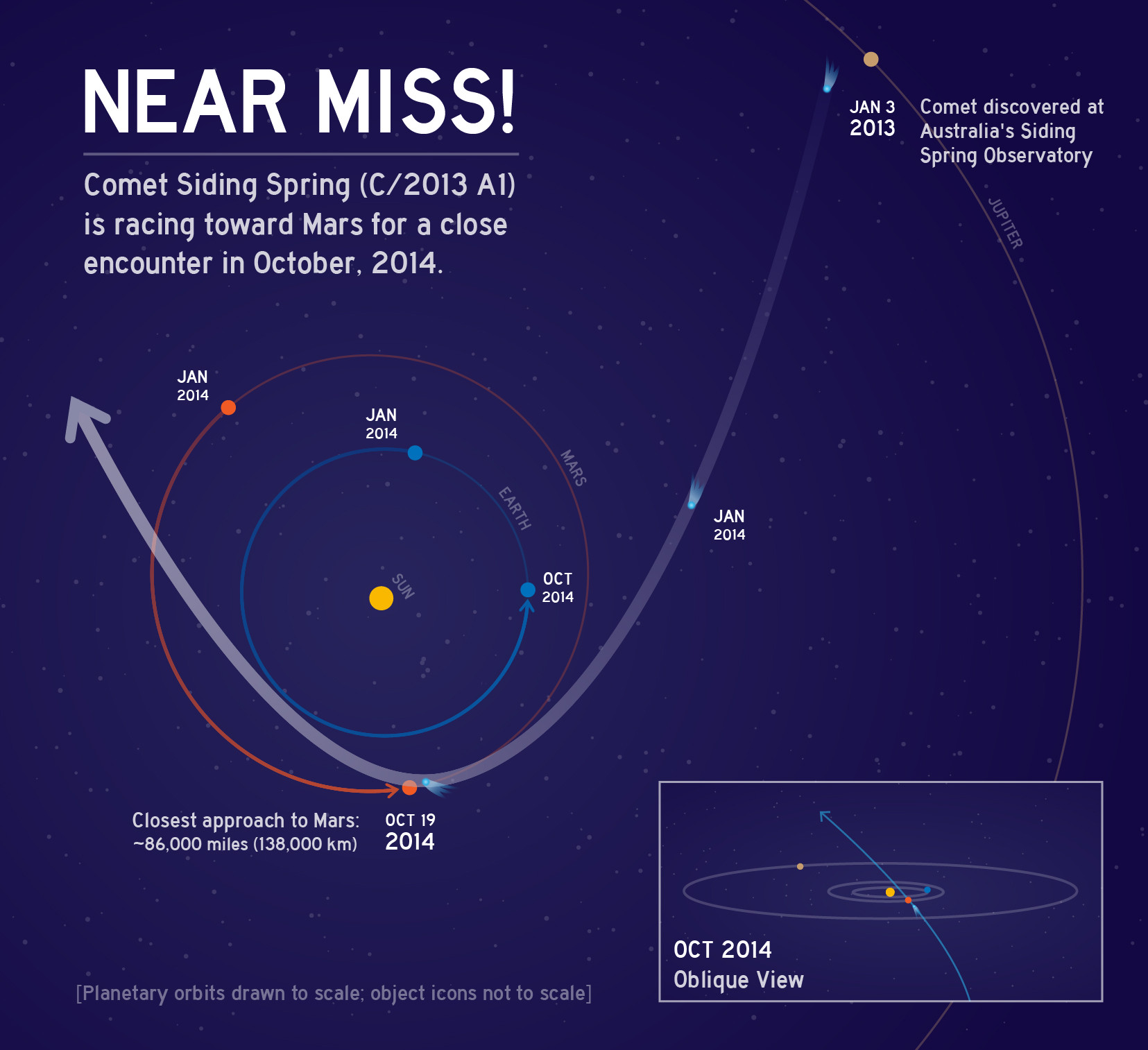 This graphic depicts the orbit of comet C/2013 A1 Siding Spring as it swings around the sun in 2014. On Oct. 19, the comet will have a very close pass at Mars, just 86,000 miles (138,000 kilometers) from the planet. Although the nucleus will miss the planet, the comet's coma of dust particles might envelop the Red Planet.

So there we have it. NASA is considering the threat for its Mars orbiters coming from comet C/2013 A1 Siding Spring significant enough that it has started preparing risk mitigation procedures for the comet's flyby in October 2014, when the comet will shoot past Mars much closer than the Moon is to the Earth, but it assesses that it won't pose any risk to its two rovers on the Martian surface.

Actual procedures that NASA will engage in will of course depend on the risk assessment and how early that can be established (no sooner than as the comet crosses the Solar system's snow line somewhere in April to May 2014), and they plan to keep a watchful eye on how the comet behaves and how much dust it releases as it approaches Mars. Latest NEOWISE images do show it to be quite a dusty fella, though: 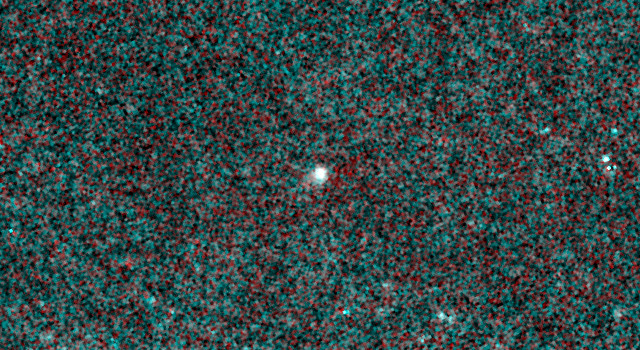 NASA's NEOWISE mission captured images of comet C/2013 A1 Siding Spring, which is slated to make a close pass by Mars on Oct. 19, 2014. The infrared pictures reveal a comet that is active and very dusty even though it was about 355 million miles (571 million kilometers) away from the sun on Jan. 16, 2014, when this picture was taken.

Update (August 15, 2014): CIOC (Coordinated Investigations Of Comets) hosted on August 11, 2014 a workshop titled Comet Siding Spring and Its Close Approach to Mars: Observer's Workshop, and all four of its sessions were webcast live via LiveStream. During the Session 1: Setting the Stage; Spacecraft Observations, roughly 34 minutes into the recorded video, Tony Farnham (University of Maryland, College Park, Maryland) presented detailed Comet Siding Spring C/2013 A1 Hazard Overview, and shared this slide:

In words, it was assessed that the comet doesn't pose much of a hazard to orbiters around Mars, and none to rovers with tenuous Martian atmosphere still providing sufficient protection to them from potential cometary dust and debris entering the atmosphere. Orbiters will still utilize a few simple risk management options available to them as a precaution, in particular they will phase their orbits to be on the opposite side of Mars as the planet enters comet's dust trail ahead of its orbit, which will buy orbiters additional protection for roughly 30 to 40 minutes during the time when the hazard is evaluated to be the greatest (impact with dust and debris, and destructive electrostatic discharge as they move through higher density dust and gas cloud that can potentially carry charge as plasma or provide a discharge path for orbiters' own electrostatic charge).

As an additional note, Tony Farnham mentioned that MAVEN might also turn off its high-voltage instruments as an additional precautionary measure, but for the time being wasn't sure on this point. I will update if and when I can confirm it.

More up to date information as the comet approaches Mars will be available on the CIOC Comet Siding Spring pages. Also see the rest of the recorded workshop videos for everything we currently know about Comet Siding Spring C/2013 A1, past and planned observations, including by hardware we currently have (and will have, MAVEN is still on its way as of the time of this update with a planned orbital insertion date of September 22, 2014) on and around Mars. More on this can also be read in NASA’s Mars Spacecraft Maneuvers to Prepare for Close Comet Flyby news release from July 25, 2014.

When you think of an asteroid as a point-impact which only affects the exact position where it lands, and you assume that each asteroid can hit anywhere on Mars with equal probability, the chance of each asteroid hitting one of the rovers is one in 18 trillion.

That means even when millions of small asteroids go down on Mars, it is still very unlikely that one will hit the rovers.

There is, however, the risk of a larger impact causing damage in a much larger area due to the impact shockwave and ejecta launched away from the impact crater. An impact event like the one which created the Victoria crater would definitely be a danger for any rover in the vicinity. But such large impacts are rather the exception than the norm. And even when they occur, the destruction would just be locally.

9
Is there any active collision avoidance aboard the spacecraft in Mars' orbit?
4
Do meteor showers from 209P/LINEAR cometary debris pose a threat to the ISS and other Earth-orbiting satellites?
3
Did the tail of Siding Spring distort communication between Mars, and Earth?
2
Just how huge is Mars' cloud of hydrogen?

4
Do meteor showers from 209P/LINEAR cometary debris pose a threat to the ISS and other Earth-orbiting satellites?
8
Is there a means to communicate with robots on/around Mars whilst the Sun is between Mars & Earth?
11
Are there any major flaws with the Mars Architecture used in the Martian?
6
Is it possible for Curiosity to broadcast live HD television from Mars to Earth?
4
Has the Curiosity rover ever communicated directly with Earth via its high-gain antenna? Signal strength & data rate?
9
How do the Mars rovers sleep through the night on Mars?
8
What "flickering goggles" do JPL scientists rely on to explore the Martian surface "in genuine 3D"?
2
Did Mars Express get hit by a "Meteor hurricane"? (2014 October 19, comet C/2013 A1) Was it observed at all?
3
What type of battery technology does Mars Odyssey use?