Is Cassini equipped for detection of non-water-based exobiology?

Looking at one of the latest images of Titan's north pole as taken by Cassini probe made me curious how well equipped this NASA's probe actually is to detect non-water-based exobiology? 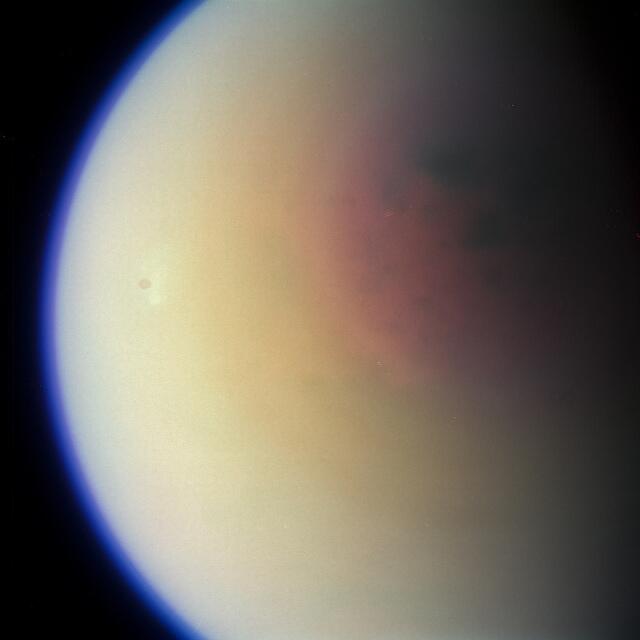 Current theories for possible life on Titan are conveniently presented on Wikipedia page on Life on Titan, and while Titan is in Earth terms extremely cold (surface temperature is about 90 K, or ŌłÆ179 ┬░C, or ŌłÆ290 ┬░F), possibility of its environment sustaining non-water-based life isn't dismissed:

So this naturally begs the question:

How well equipped is Cassini to detect non-water-based life, traces of metabolic byproduct gases in Titan's atmosphere of such life forms, and other local environmental changes of non-water-based biota? Which of its many sensors are particularly suitable for this and have any observations to date shown evidence of unexplained local fluctuations in atmospheric composition, fluorescence or surface thermal characteristics, perhaps around areas of Solar terminator or edges of its Saturn-facing side during Titan's librations?

I.e. what would we be looking for with sensors Cassini has available to it during one of its many flybys of Titan, if we were looking for possible signs of non-water-based life on it?

It's possible that the Huygens probe already delivered us some data about the possibility of methanogenic life on Titan.

If bacteria are consuming complex hydrocarbons at the surface of Titan, the observable effects might include: complete consumption of $C_2H_2$ at the surface, reduction in $C_2H_6$ and organic solids at the surface compared to the accumulation expected from photolysis alone, and a sink of hydrogen at the surface creating a gradient in the hydrogen mixing ratio with altitude. All of these effects may be detected and measured by the Huygens probe.

The Huygens probe, in fact, did detect a reduction in $H_2$ at the surface. The $H_2$ signal hovered between 104 and 105 counts per second throughout the atmosphere, but at the surface it was clearly below 104 counts per second. I'm not qualified to assess whether this reduction is significant, but I imagine there are many professionals poring over this data, trying to extrapolate what they can from it.

Considering this data gathered by the Huygens probe that Cassini already dispatched and ongoing data gathered by Cassini on each flyby, I would say that Cassini is certainly well equipped to help us detect life on Titan. As with any instrument, however, it requires a substantial degree of human interpretation of data so it may be a while before we can draw any real conclusions. And it may be that we determine that we need to send other instruments to bolster our results.

11
Could there be liquid hydrogen oceans on the surfaces of worlds (including frozen gas giants) in the distant Kuiper belt or Oort cloud?
5
Why Never-EVER Land?
6
What would a "water" landing on Titan be like? How viscous is the liquid?
3
Could Liquid Methane on Titan be used as a Heat Source?
8
How quickly might a Titan rover or drone get covered in oil and dirt? Will it need windshield-wipers?
1
Does the Dragonfly project (quadcopters on Titan) envision attached RTG's or would they be static and revisited for charging?
8
How (the heck) do they know some lakes on Titan are 100 meters deep?
4
Challenges to building a human habitat on Titan (Saturn's Moon)?
9
How do they know that the Dragonfly helicopter won't get quickly coated in tholin muck? Any desliming technology for camera lenses or propellors?