What is this perturbation effect called, and what would be an analytical expression for the resulting eccentricity oscillations?

In this answer I've generated some oscillations of eccentricity by being somewhat naughty and propagating a TLE for +/-250 days from epoch. I believe it's okay for the purposes of demonstrating gross eccentricity oscillations.

This does tend to reproduce Tiangong-1's 50 day oscillation in eccentricity, but I'd like to see if I can confirm this behavior, and the way it varies with inclination, with some analytical approximation.

These oscillations are a known effect, but I don't know much about it. I think there is a name for oscillations in eccentricity due to non-spherical gravity terms and may have used it in the past, but I can not find that now, nor a simple expression. It may be a 2nd order effect connected to or driven by apsidal precession, note the apparent nulling between 60 and 65 degrees, consistent with the Molniya orbit inclination of 63.4 degrees.

You can also see that the semi-major axis oscillates as well, the apoapsis hits a plateau at the same time the periapsis makes sharp "u-turn" at it's minimum. 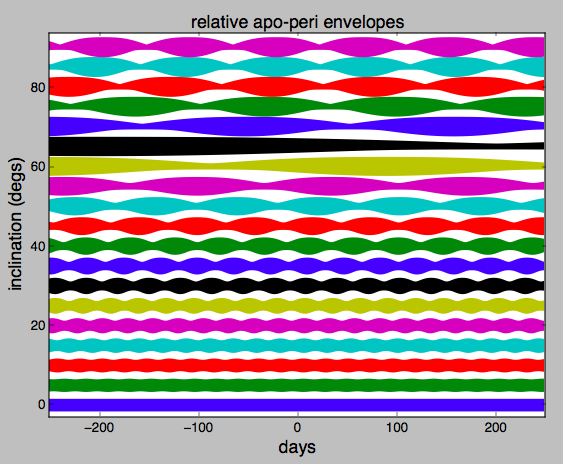 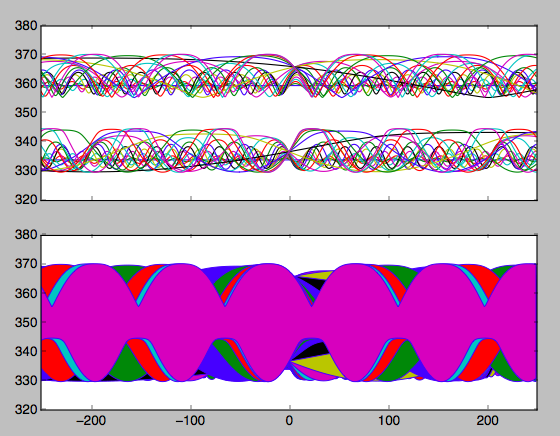 As the comments on the original question have stated, this is due to the spherical harmonics of the Earth. This answer is adding more context.

In the two-body problem, one assumes that the central body (in this case Earth) is a perfect sphere with evenly distributed mass. If this is true, its force due to gravity can be modeled as a point source at its geometric center. Of course in real life this isn't true. Since the Earth is rotating, its equatorial radius is larger than its polar radius. This is the J2 perturbation, which is a first order approximation of Earth's spherical harmonics. Also note that the farther you get away from the Earth, the weaker this perturbation gets, since Earth looks more like a point mass from far away.

In the cases of sun synchronous orbits, this is actually extremely useful. One can set up their altitude and inclination such that the J2 perturbation will cause a drift in right ascension that matches the rate of change of Earth's true anomaly around the sun. Here is a plot of the Keplerian orbital elements for a sun synchronous orbit for one year: 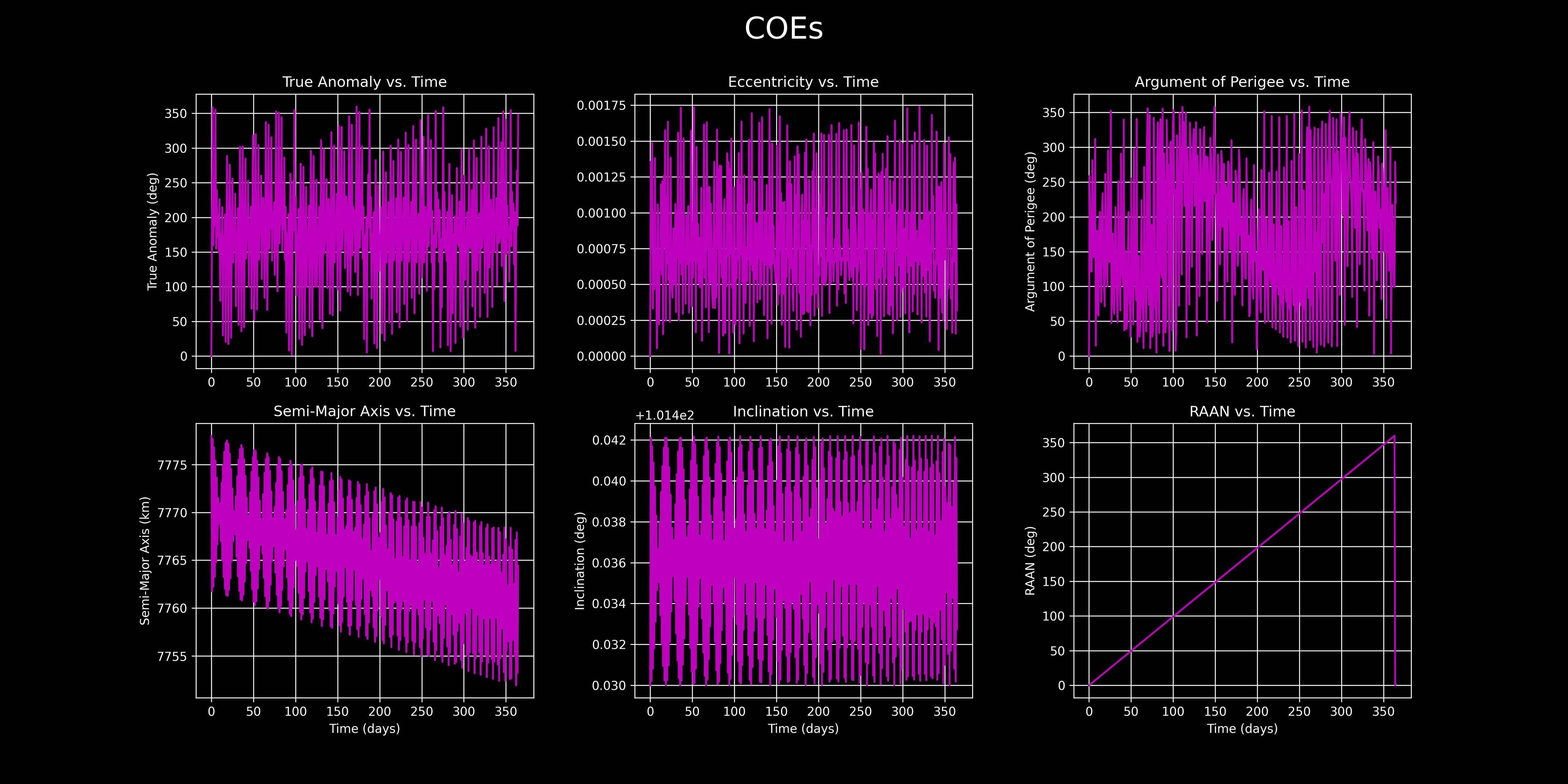 Since this sun synchronous orbit is also in LEO, it shows the same oscillations in semi-major axis and eccentricity. The secular decrease in the semi-major axis is numerical error, since we know that gravity is a conservative force, and semi-major axis is inversely proportional to (absolute value) of orbital energy. This plot was made from the results of integration with a RK4/5 solver. Other solvers may have more or less energy drift for these equations of motion

Also note J2 is only a first order estimation. Spherical harmonic models can get much more complex. For example, the GRAIL missions around the Moon produced a 1500x1500 gravity field for the Moon (JGGRX model).

It is possible to represent the exact variation in these orbital elements using the Gaussian Variation of Parameters (VOPs), from Vallado 4th edition, pages 636. Please refer to the ten prior pages for the exact derivation. Note that general astrodynamics tool (like GMAT or Nyx) do not use the Gaussian VOP for their propagation as Keplerian orbital elements are singular (e.g. one cannot use these equations for near-circular or near-equatorial orbits). 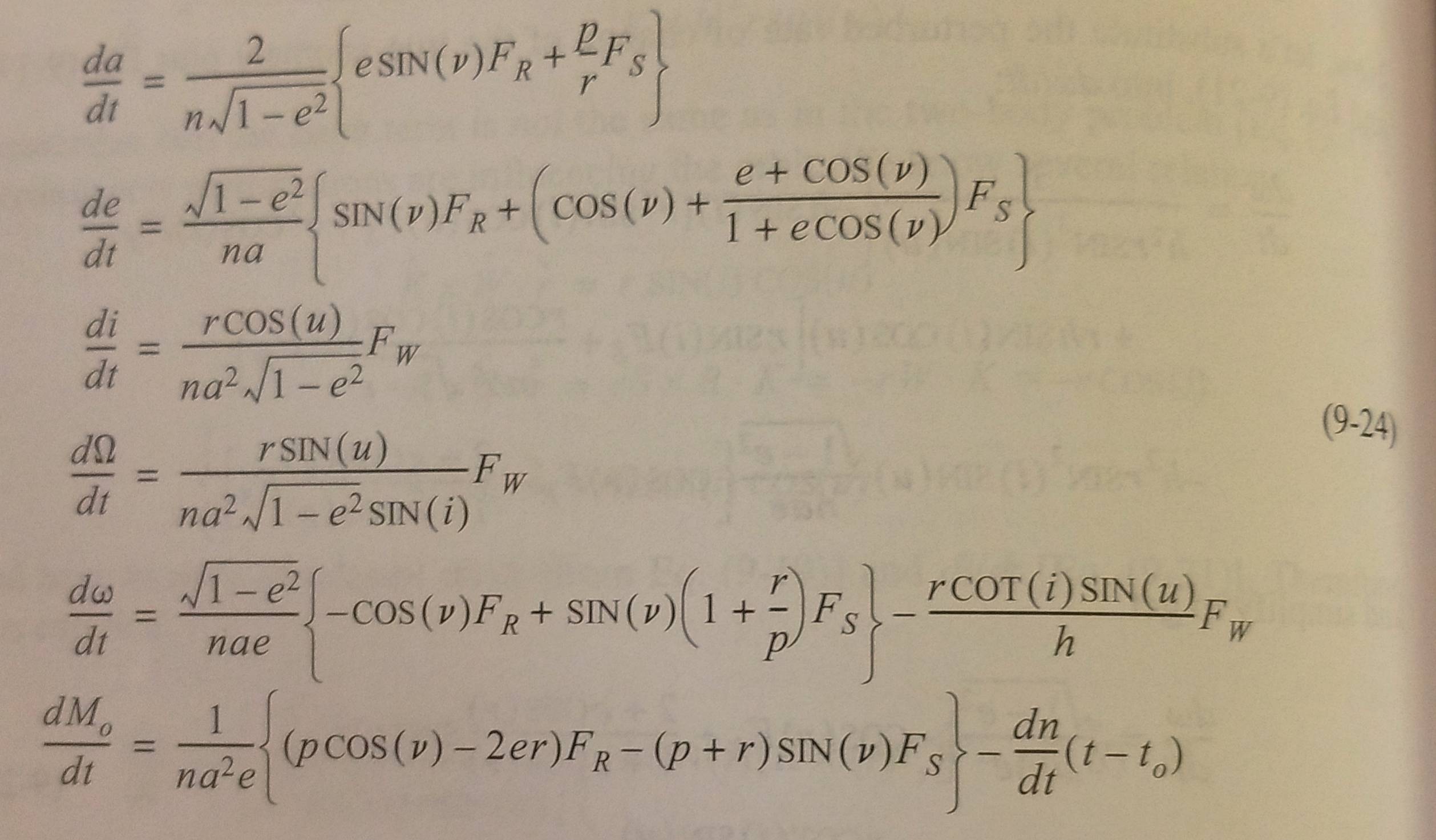 Not the answer you're looking for? Browse other questions tagged orbital-mechanics identify-this-object mathematics calculation or ask your own question.

12
Why are Tiangong-1's Apogee and Perigee Graphs Wobbly?
4
What is the reason for secondary oscillations in apogee and perigee plots for objects 41332 and 41333?

9
What is the effect of gravity slingshots around Earth on Earth's rotation and orbit time, and is this effect worth considering?
7
Negative photon pressure? What is the physics behind this expression?
4
What would be the effect of a non-periapsis and non-apoapsis prograde burn on the shape of an objects orbit?
11
What is this balloon for in this clean room and what is the proper name for the "stand" that is holding the satellite?
11
What does this SpaceX tweeted photo show and what causes the pure red and blue color?
4
What is the reason for secondary oscillations in apogee and perigee plots for objects 41332 and 41333?
6
Analytical expression for the ground track of the International Space Station
2
What mission is this Chris Hadfield photo associated with and what is the location? And what is that thing?
0
What is the origin of this space station design concept and animation?