How can I calculate the orbital elements from two position vectors and a time difference?

I know I can find the inclination using linear algebra and my position vectors, but is there a way to figure out the rest of the orbital elements from this information?

The positions are X,Y,Z coordinates in the Earth-centered inertial (ECI) frame.

If you have no other infomration about the orbit of your satellite (e.g. the orbit is circular), I believe you have to solve this problem with the Lambert's theorem assuming an elliptic transfer orbit (see Wikipedia). However, as far as I know there is no analytical solution and either numerical methods or series expansions need to be used.

In this answer I will try to introduce some aspects about this problem and give you some hints about how to approach it.

As stated by the theorem, given a gravitational parameter $\mu=GM$, the time $\Delta t$ required to perform a given transfer is a function of 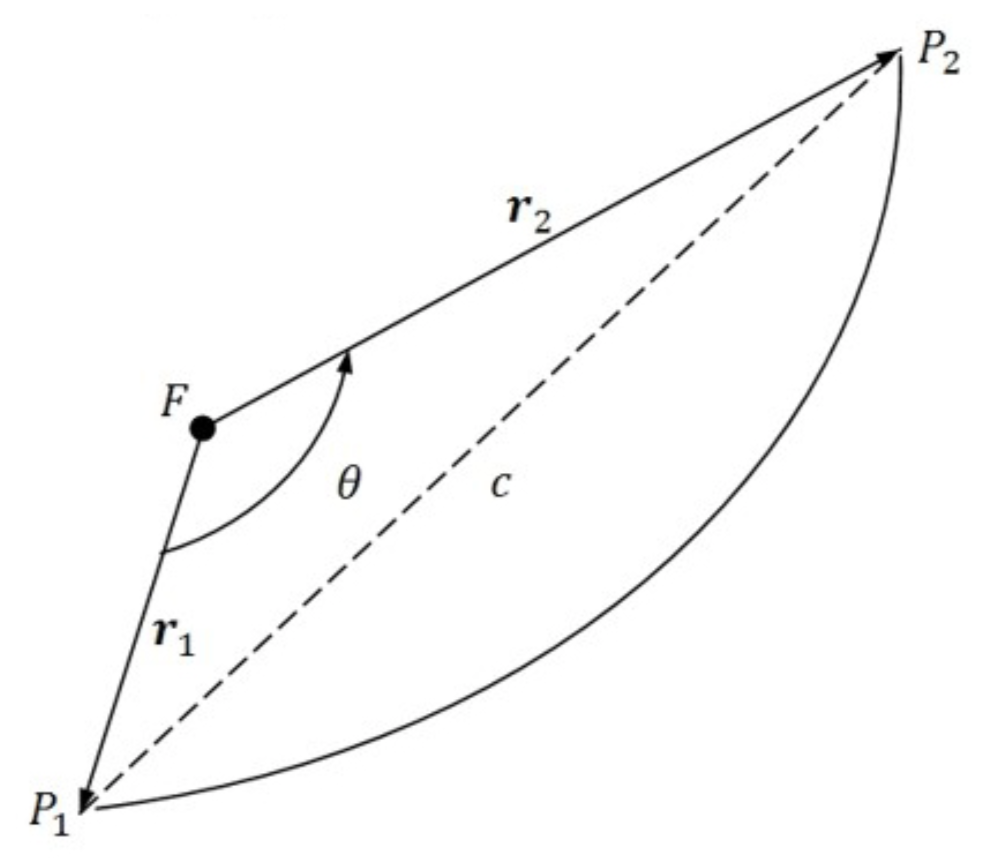 In your case, you know $\Delta t$ but you need to find $a$. You will see that there are actually two different values of semimajor axis that bring you from one position to the other in a certain $\Delta t$ (see figure below).

While both solutions are correct and physically possible, since you are describing an orbit around Earth you might be able to select your desired solution (e.g. the direction of motion only matches one of the solutions, and in an extreme case of a HEO one of the solutions will collide with the Earth surface).

As I introduced before, as far as I know no analytical solution exists to solve this problem. Some proposed numerical methods/series expansions include:

amongst others. A review of the Lambert's problem is made by D. de la Torre Sangrà and E. Fantino here (and here).

A generic Lambert solution procedure could be:

In [Bate1971] (Chapter 5) a more detailed explanation of the problem is given together with proposed methods/algorithms to solve the Lambert's problem.

I hope it helps!

Not the answer you're looking for? Browse other questions tagged orbital-mechanics orbit trajectory calculation or ask your own question.

35
How to programmatically calculate orbital elements using position/velocity vectors?
8
How to get earth-centered, earth-fixed coordinates from Skyfield?
8
What is this algorithm to calculate orbital state vectors?
14
Converting Orbital Elements to Cartesian State Vectors
4
Calculate Argument of periapsis of orbit given focus and two points on ellipse
6
Accuracy of converting from TLE/Orbital Elements to Cartesian if used for other propagator?
6
How can I calculate the future position of a satellite orbiting a central body as a function of time using known orbital elements?
6
Obtaining orbital state vectors given two position vectors and an eccentricity
1
How do I correctly convert State Vectors to Orbital Elements to State Vectors at t (sec since epoch) in 2D?