Will Santa Claus deliver presents to Mars in 2025? [closed]

Recently, CNN informed us that Mars One seems to still be on track for landing on Mars in 2025.

If this is the case, we may have humans celebrating the first Christmas on Mars of all time. Since this is such a big milestone in the history of Christmas, it would be unfortunate if Santa Claus couldn't deliver.

You may recall that in Santa's 1998 interview with NASA he discussed his plans for delivering presents to any human colonies on other planets in the solar system. How is Santa's space program coming? Will he be ready to deliver to Mars in 2025?

Let's first get a few boring details out of the way, then we'll see if we need to tell Santa to add a detour to Mars to his 2025 schedule.

There won't be any children on Mars by 2025 with the minimum applicant age requirement of 18 years by end of August 2013, deadline for Mars One online application program:

This means that even if Mars One is capable of following its own road map, the youngest first permanent settlers on Mars will be no less than 30 years of age (in Earth years, see below) by Christmas 2025.

But to answer more directly, if Santa Claus is coming to Mars in 2025, we have no way of confirming that, short of establishing that so far, till December 2013, Mars One project is on schedule according to set roadmap milestones. The application program has ended and here is a searchable list of all the applicants with links to their profiles and introduction videos.

So, Santa Claus will have to keep in shape until 2025, with 12 complete and worldwide Christmas deliveries of presents to all the well behaved children around the globe first, then the same, plus a quick (at least 40 minutes long)* detour to Mars to deliver present there in 2025 to a bit older children, too. How old? Since Martian year lasts whole 2.135 Julian years, some of the first settlers might be as young as 14 years of age in Martian terms by Christmas 2025. So it looks like we will have to make sure to notify Santa of this fact before planning his worldwide presents delivery route for 2025. It should indeed be the very first Santa's Interplanetary Presents Delivery (SIPD). ;) 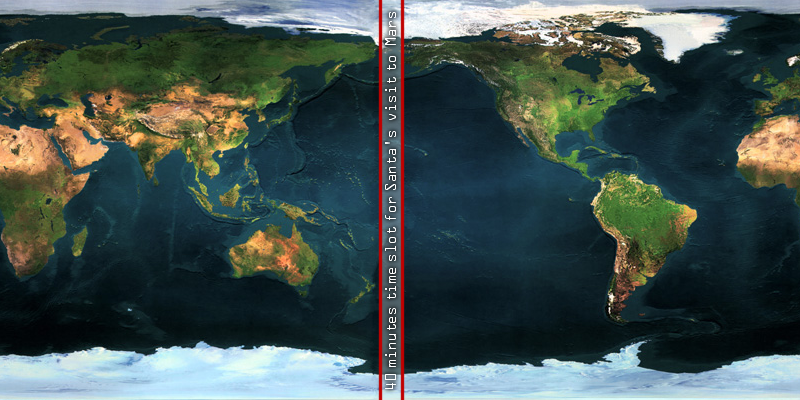 * Assuming the speed of light in vacuum, the theoretical maximum speed at which information in the universe can travel. Since we know that Santa Claus is real and has a physical presence, he cannot move any faster to Mars and back (20 minutes in each direction). That shouldn't stop him from delivering all the Christmas presents to all the children in the world too, tough. He does have the best helpers available to him to help him achieve that. And there is just about 40 minutes of one Earth day available in his schedule during Christmas, because not all the Earth's globe is populated by children and there might be a bit of space in his schedule when the Christmas evening reaches Pacific.

Not the answer you're looking for? Browse other questions tagged mars mars-one developing-space-programs santa-claus or ask your own question.

20
How would a long pole be transported to space?
1
When is Christmas on Mars?

10
Will the Mars Entomopter actually work?
7
How will the Mars One landing site be chosen?
8
Will any Indian in the final crew of the Mars One missions be in violation of Section 309 of the Indian Penal Code?
10
Will the Mars Transit Vehicle need to include a water recycling system?
3
Will, or when will, Mars Global Surveyor decay from orbit?
19
What prompted Lovell on Apollo 8 to announce "there is a Santa Claus"?
8
How many orbits will it take for Santa to deliver all the presents?
6
What are the most difficult challenges SpaceX will face getting astronauts to Mars by about 2025?