I can find no clear information regarding the use of the launch escape system in today's Soyoz MS-10 abort-to-ground. The failure seems to occur just as LES jettison is scheduled to take place.

The live webcast commentator is clearly describing the events as planned, not as they unfolded, so it is not clear how the Soyuz cleared the rocket without an LES.

Yes, the launch escape system was used, contrary to earlier reports based on assumptions and ignorance of Soyuz hardware.

However, it was not the tower that we are familiar with on Mercury and Apollo era manned rockets that was used.

The Russian launch escape system, SAS (Система Аварийного Спасения, or Sistema Avariynogo Spaseniya, meaning emergency rescue system), has two different motors, the solid escape motor tower (DU SAS), the type that fans of non-Shuttle NASA manned launches are familiar with, and 4 RDG (РДГ) boosters attached to the fairing. Some visualizations show the RDG boosters at the base of the fairing, while this diagram shows the boosters at the top just below the solid escape motor tower. 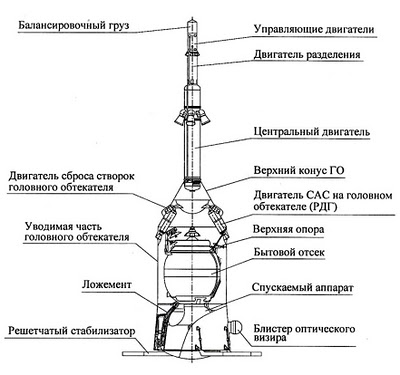 Depending on when in the flight an abort is called, the SAS will behave differently. On the pad and up to the strap-on booster separation, the SAS will use the tower solid motor first, at 14 Gs of acceleration, then will switch to the RDG boosters for a few more seconds of thrust at around 7Gs. The high thrust of the solid escape motor tower is to counter any extra thrust that the strap on boosters may be providing, as well as to give enough height for the crew capsule's (Descent Module) parachutes to work when they're deployed.

After the first staging event, when the strap-on boosters are no longer firing, and until the fairing is separated when far enough out of the atmosphere, the RDG boosters would carry the crew away from the rest of the rocket.

For this specific flight:

At T+1min 58sec, the first stage ended and second stage started, with the strap-on boosters being jettisoned. This is where there is evidence of an accident.

At T+2min 40sec, the Descent Module separated from the Orbital Module and left the fairing.

The announcer was basing their reporting based on canned telemetry, and did not realize what was going on until after the canned telemetry showed the second stage separation.

It is a tradition for Soyuz rockets to include a plush toy suspended above the crew on an elastic cord as a quick-and-dirty G-force indicator. About 2 minutes 40 seconds into the video that NASA released of the launch (link to YouTube), during first stage separation, we see an internal shot of the capsule where the toy is suspended to about 3 Gs, then instead of going to just 1.5 Gs as expected, it becomes weightless and the internal cameras glitch out, likely due to the directional antenna not being aligned properly any more.

Next we see the strap-on boosters flying away asymmetrically, instead of the usual Korolev Cross, we see 3 boosters tumble away, signs of heavy debris, and the exhaust from the core stage is very asymmetrical.

The video then goes on to show the canned telemetry, but we can hear the translator quietly in the background giving details about loss of thrust as they translate the crew's broadcasts.

Scott Manley produced two videos covering the early observations of the abort, and follows up with more information about the launch escape system used, where I get some additional information from.

Not the answer you're looking for? Browse other questions tagged soyuz-spacecraft failure launch-escape-system or ask your own question.

10
What kind of launch escape system (LES) does Dream Chaser have?
21
How hard is it on the crew to go through the 14+ g's of a launchpad abort of the Soyuz, or the Falcon system?
16
Has a pad abort ever been done on an actual launch?
5
What happened during ILS Proton M / Mexsat 1 launch?
6
What abort modes does Soyuz have in space?
8
How vulnerable could space launch vehicles be to a “lone gunman”?
19
How did the attitude system of the uncrewed Soyuz 7K-OK No.1 fail on the launch pad in 1966, killing ground staff as LES was activated?
10
Does Soyuz LES take the service module?
5
Why were the canards on the Apollo LES retained even after being proven unnecessary?
1
Will Ariane 5 ECA have LES for the launch of JWST?