How was the Apollo IMU calibrated?

Both the command and lunar modules of the Apollo spacecraft has navigation systems with inertial management units. IMUs are known to drift over time. How were they recalibrated?

My answer below originally started as an answer to How do you calibrate the accelerometers of an IMU in space, outside the GPS range?. Several people suggested moving the answer to its own question.

During the Apollo program, the IMU did drift and it was standard procedure to periodically correct it. This was done by having the astronauts locate a pair of known stars using a sextant, and then entering their positions using computer program P52 "IMU Realign":

In order to check the alignment of the guidance platform, reference had to be made to the stars. Only two were required and Collins used the sextant, a 28-power optical device built into the spacecraft’s hull, to take marks once the instrument had been precisely aimed at each one.

Mike would enter the star code and ask the computer to drive the optics to aim at that star. By looking through the sextant eyepiece, he could see how far the star was from its expected position by virtue of the inertial platform having drifted. He then carefully moved the sextant’s aim to centre the star and pressed a button upon perfect alignment, thereby informing the computer where the star really was.

Once Mike had done this for two stars, the computer told him the star angle difference, a comparison of the known angle between the stars and the measured angle between Mike’s marks. '00000' for the top cluster was known as 'all balls' and made Mike a happy man for it meant that his aim at the two stars had been accurate to less than one hundredth of a degree. The star angle difference for the lower cluster shows '00001', one hundredth of a degree difference - still considered very good.

The point of the exercise was to realign the slowly drifting inertial platform. For this, the computer calculated the error in its orientation. This yielded three Euler angles by which the platform’s orientation had to be rotated or ‘torqued’ in order to restore perfect alignment with the stars, in thousandths of a degree. These are the next three items in the clusters.

The alignment of this platform was crucial to some of the most important operations of the spacecraft; navigation and engine burns. Engineers were therefore keen to keep an eye on its rate of drift. Mike would bring all three angles onto the three register displays of the DSKY by asking it to display Noun 93. Since the flight controllers were able to see the contents of the DSKY’s display on their consoles, this gave them an opportunity to take a note of them.

Realignments done during Apollo 11 are shown in the following table: 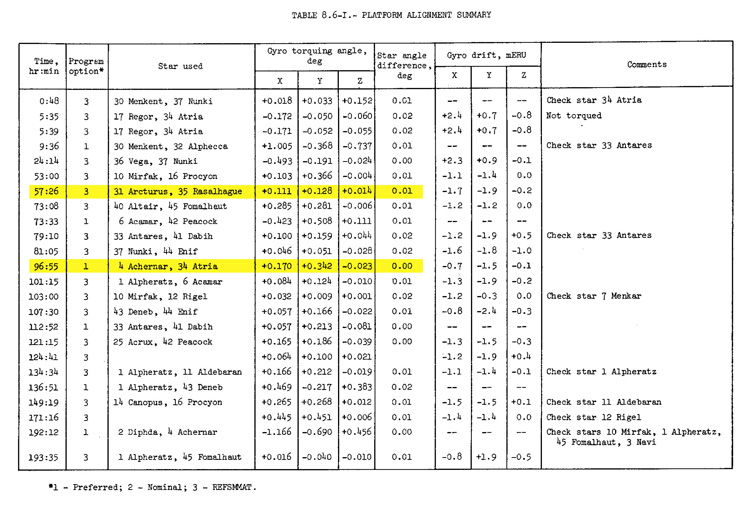 Occasionally CMP Michael Collins would jot down the results of the corrections onto the walls of the spacecraft. The two corrections highlighted in yellow in the table above can still be seen today as graffiti on the walls of the Columbia in the National Air and Space Museum: 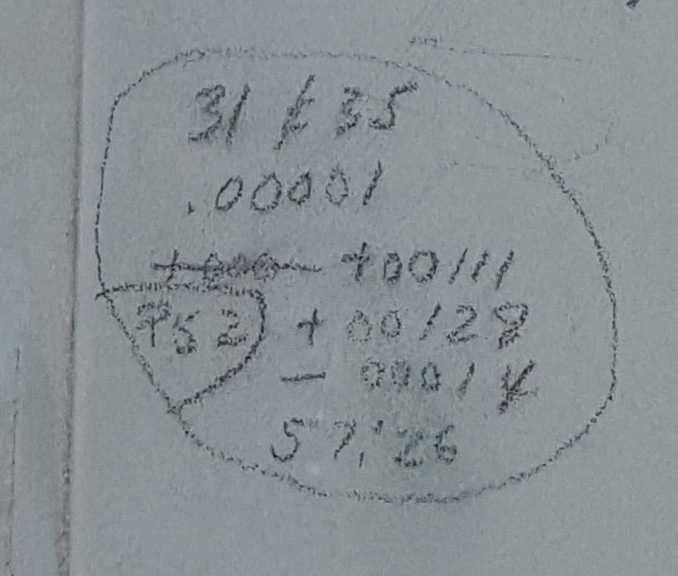 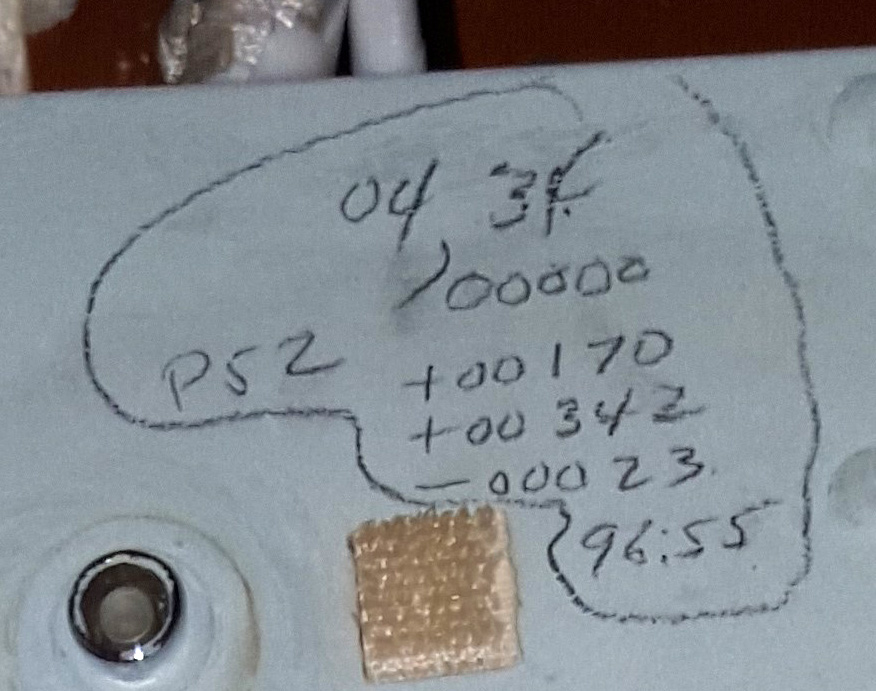 5
What was back-up plan in case of Apollo CSM Primary Guidance System IMU went to gimbal lock?
2
What was the normal function of the (coax?) crosshairs used during the Apollo 13 famous manual burn?
4
How do you calibrate the accelerometers of an IMU in space, outside the GPS range?

17
How was reserve fuel calculated for the Apollo missions?
23
How intrusive was the Apollo Master Alarm system?
6
Is NICER/SEXTANT the first civilian "spacecraft" to determine it's own position in space without GPS or uplinked data?
5
Was the Apollo sextant used (or tested) to determine position while in Earth orbit?
10
How was the mass of the Apollo CSM determined?
6
What coordinate system was used for the Apollo missions?
12
Double redundancy for the Saturn V LVDC computer memory, how were disagreements resolved?
5
What was back-up plan in case of Apollo CSM Primary Guidance System IMU went to gimbal lock?
0
How long was Apollo put on hold after Apollo 1?