How many solar system bodies have had coherent radio transponders?

A transponder amplifies, (often) frequency-shifts, and rebroadcasts a received signal. Old-style telephone and TV distribution satellites in GEO used simple transponders to rebroadcast the uplinked signals from Earth without manipulating the data. Some were even of the "bent-pipe" variety (they didn't frequency shift, just amplify the signal and turn it around towards Earth.

A coherent transponder (in the context of modern spaceflight navigation and planetary science) uses a phased locked loop (or similar) to generate a downlink carrier frequency that is locked to the uplink carrie in some integer ratio, for example the Voyager S to S and X to S-band ratios are 240/221 and 880/221, respectively. That way the down-link is coherent with the uplink, and comparing the returning frequency to the uplinked frequency gives extremely precise relative radial velocity measurements.

Deep space spacecraft have these so that their distances (from delay time) and velocities (from Doppler shift) can be measured on Earth and their positions calculated and tracked.

Answer(s) to How will “InSight's onboard communications gear perform a radio-science experiment to shed further light on Mars' innards?” (Space.com) make it clear that InSight will have a coherent transponder for precision velocity and distance measurements, and the paper InSight coordinates determination from direct-to-Earth radio-tracking and Mars topography model confirms this, and Signatures of the Martian rotation parameters in the Doppler and range observables as well as Mars dynamics from Earth-based tracking of the Mars Pathfinder lander make it clear that previous Mars landers likely also had coherent transponders for precise measurements of Mars' nutation.

See also How will InSight's RISE antennas end up pointed in the right direction?

Deep space spacecraft that are moving in space do not count. For this question, it's just coherent transponders that sit or have sat on solar system bodies. Rovers would count because they can optionally not rove for a while. Links directly with DSN, and links with other spacecraft that also link with Earth on a different pair of frequencies are both okay. 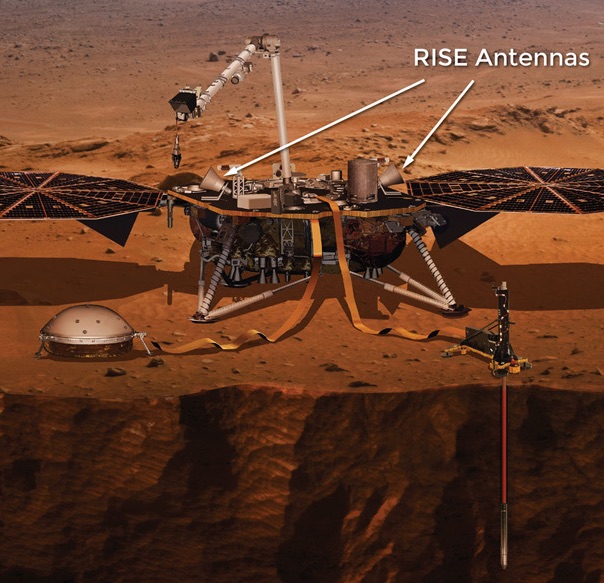 2
How will InSight's RISE antennas end up pointed in the right direction?
1
How will “InSight's onboard communications gear perform a radio-science experiment to shed further light on Mars' innards?” (Space.com)

3
How have/how will Indian ground stations be used for comms or tracking of deep space spacecraft?
5
How does a three-way doppler shift measurement work?
2
Have any deep-space spacecraft supported same-band turnaround of Earth-based doppler measurements?
6
Why such a large observed doppler shift from Apollo 17 orbiting the moon?
2
Why will radioastronomy telescopes be used to listen to InSight's entry into Mars' atmosphere instead of DSN?
2
How will InSight's RISE antennas end up pointed in the right direction?
2
How exactly does TDRSS provide tracking? (Tracking and Data Relay Satellite System)