When an how will BepiColombo and MIO separate? (JAXA’s Mercury Magnetospheric Orbiter)

With all the fanfare about BepiColombo (mine included) I didn't realize that there were two spacecraft on this launch. From Spaceflight Now's Ariane 5 launches two satellites on 7-year voyage to Mercury:

The climb to space went smoothly and 27 minutes after liftoff, ESA’s Mercury Planetary Orbiter and JAXA’s Mercury Magnetospheric Orbiter, both attached to an ESA-supplied carrier spacecraft known as the Mercury Transfer Module, were released from the Ariane 5’s upper stage to fly on their own.

@DavidHammen's answer explains that the "final approach" to stable orbit around Mercury from an is complicated and will be in the neighborhood of Mercury for a short while to do so.

Question: At what point will the two spacecraft separate? And once separated, will they have similar orbits, or move to different orbits because of their different science objectives?

When approaching Mercury, the transfer module will separate and the two spacecraft, still together, will be captured into a polar orbit around the planet. Their altitude will be adjusted using MPO’s thrusters until MMO’s desired elliptical polar orbit of 590 x 11640 km above the planet is reached. Then MPO will separate and descend to its own 480 x 1500 km orbit using its thrusters. The fine-tuning of the orbits is then expected to take three months, after which, the main science mission will begin.

ESA's MPO (Mercury Planetary Orbiter) purpose is surface investigation, so it will have lower orbit.

I'll add to @Heopps' answer a few additional details about this interesting approach:

From ESA's MISSION OPERATIONS - GETTING TO MERCURY

The Mercury approach phase starts after the last electric propulsion manoeuvre has been completed, approximately two months before the first Mercury orbit insertion manoeuvre. During this phase, the MTM will separate from the spacecraft stack. The remaining composite of MPO/MMO/MOSIF, the MCS Approach configuration (MCSA), will drift into Mercury's sphere of influence, and will need only a small manoeuvre to get captured in an initial orbit of approximately 674 × 178 000 km. This process is known as a 'weak stability boundary' capture.

The MPO will perform the Mercury capture manoeuvre at pericentre and then the manoeuvres for orbit lowering to the MMO mission orbit.

After final checkout and preparation, the MMO will be separated in the required attitude and simultaneously spun up by the separation mechanism.

The MPO with the MOSIF still attached, the MCS Orbit configuration (MCSO), performs another two manoeuvres for pericentre raising and apocentre lowering, and then separates the MOSIF in a safe direction. The MPO then descends further to its own mission orbit. 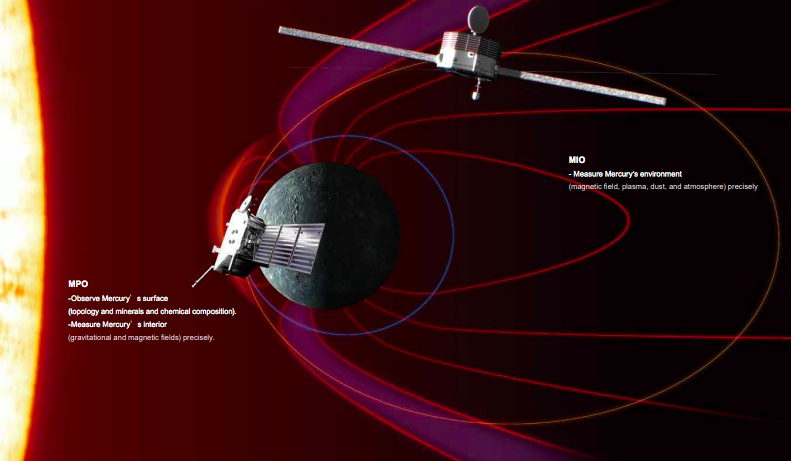 Not the answer you're looking for? Browse other questions tagged mission-design mercury bepicolombo or ask your own question.

11
How much adjustment of position is required when making long flights through the solar system?
8
How tectonically active is Mercury?
3
How could Mercury be used as a gravity sling to the outer planets?
15
Halo vs Lissajous orbit: Which station-keeping strategy to select and when?
8
How feasible is the Moonspike mission?
3
How will Philae's power failure affect Rosetta's mission?
3
How will the Lucy spacecraft move from Jupiter's L4 to its L5 Trojan asteroids?
7
How will the SpaceX ITS return from Mars?
4
Help understanding BepiColombo's weak capture at Mercury's L1 and need for delta-differential one-way range measurements
4
How much more quickly does night come on Mars compared to Earth? Will it be easier to see Mercury there?