What is the significance of the name “Jade rabbit”?

On Saturday (December 14, 2013), the first soft landing on the Moon since 1976 occurred. The rover is named "Jade rabbit", what is the significance of that name?

Emily Lakdawalla was covering this naming process for the Yutu (玉兔) rover in her Planetary Society blog posts for the majority of us Westerners that don't speak Chinese (yours truly included). In one of her posts, she describes it like this:

Yesterday the Chinese space agency held a press briefing about the Chang'e 3 lunar lander. They announced that the rover has been named Yutu (or "Jade Rabbit," a legendary companion of the goddess Chang'e). Yutu was selected from a list of 10 names, receiving 649,956 votes out of nearly 3.5 million votes cast. In a written statement that I'm decoding with the help of Google Translate, they remark that the name Yutu embodies Chinese traditional culture and reflects their intent for peaceful use of space, and that they're looking forward to the rover rolling across the Bay of Rainbows. Chang'e 3 will launch on a Long March III B onto a direct lunar transfer orbit (an orbit with perigee 200 kilometers and apogee 380,000 kilometers).

Since then, Wikipedia has also updated their page on Moon rabbit, describing this name from a Chinese folklore in greater detail:

The Moon rabbit in folklore is a rabbit that lives on the Moon, based on pareidolia that identifies the markings of the Moon as a rabbit. The story exists in many cultures, prominently in East Asian folklore and Aztec mythology. In East Asia, it is seen pounding in a mortar and pestle, but the contents of the mortar differ among Chinese, Japanese, and Korean folklore. In Chinese folklore, it is often portrayed as a companion of the Moon goddess Chang'e, constantly pounding the elixir of life for her; but in Japanese and Korean versions, it is pounding the ingredients for rice cake.

And specifically on Jade Rabbit (Yutu):

Han Dynasty poets call the rabbit on the Moon the "Jade Rabbit" (玉兔) or the "Gold Rabbit" (金兔), and these phrases were often used in place of the word for the Moon. 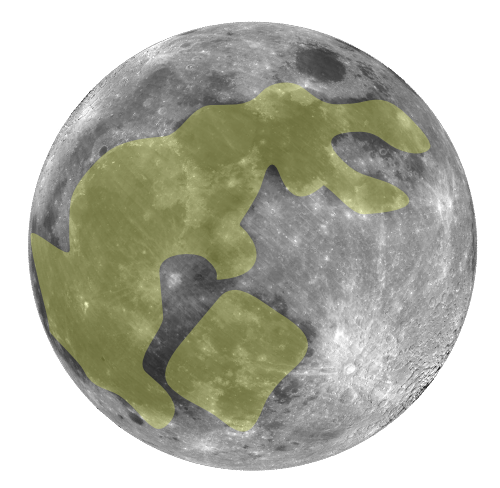 The image of a rabbit and mortar delineated on the Moon's surface (Source: Wikipedia on Moon Rabbit)

So, to my understanding, Yutu / Jade Rabbit is to Chinese people what The Man in The Moon (or to some The Basketball Player in the Moon) is to us Westerners.

Not the answer you're looking for? Browse other questions tagged the-moon landing terminology chang-e yutu or ask your own question.

15
What is the value of the cross-track angle between the two designated CRS-4 first stage recovery zones?
36
Does the moon have a name?
11
When Chang'e-3 landed on the moon, did LADEE notice?
2
Chang'e 4, what is planned during December 12 and January 3?
4
How to soft land on Moon?
0
What was the first piece of wood to reach the far side of the Moon? Or the first spacecraft?
0
What is the connection (if any) between the new Artemis mission and the two Artemis spacecraft (Themis-B, -C)?