What is the difference between halo orbits and Lissajous orbits?

The Wikipedia articles for halo orbit and Lissajous orbit leave me wondering how these two orbits are different from an orbital mechanical point of view.

Could they be discussed together here, so I can understand the similarities and differences? Those two articles are not really written with the same format, so comparison is difficult.

Also, why doesn't the image in the Lissajous orbit article look like a Lissajous pattern?

afterthought: I wonder if it would it make sense some day for those two articles to be merged?

Halo orbits are a sub-class of Lissajous orbits.

So that image showing a simple circular-ish orbit is just showing a 1:1 Lissajous pattern.

These Lagrange-point orbits are really orbiting around the larger body, in a way that's resonant with the smaller body. If we talk about the Earth-Sun system, then satellites like DSCOVR, SOHO (L1) and the (hopefully) upcoming James Webb Space Telescope (L2) will be in Heliocentric orbits (orbits around the Sun) about 1% closer or farther (respectively) than the Earth's orbit around the Sun.

The Earth's gravity is weak there, but strong enough to "tug" the satellites along a little faster or slower to keep them synchronized.

When you step into the twilight zone of a rotating frame and move with the Earth, their motion appears to be around the L1 and L2 points from your point of view in the rotating frame.

Mathematically, when doing calculations for a simplified Circular restricted three body problem(CRTBP, CR3BP) the equations become easier when you use the rotating frame.

In an inertial frame, those satellites will appear to drift slightly up and down, making one full cycle roughly twice a year. In the rotating frame only, that motion looks like an orbit around, or at least associated with, the Lagrange point.

That motion has a "horizontal" or left-right component, and a "vertical" or up-down component.

In some cases, when this CR3BP motion is large enough amplitude, those motions can have the same period, and so the orbit will appear to be closed, cyclic, and periodic in the rotating frame. Orbits in this subset are called Halo Oribits. SOHO and the future JWST will be in these.

However there are plenty of orbits in this family where the horizontal and vertical motion do not have the same period, and so they will appear to make a criss-cross or Lissajous figure in space viewed in the rotating frame. These are called Lissajous orbits. There is no special relationship between the horizontal and vertical periods, they don't need to be locked in say a 4:3 ratio for example. Remember these are not real orbits.

From a satellite's point of view Halo orbits are used because they tend to circle around the Sun-Earth axis (or the Earth-Moon axis) and avoid radio interference and power outages due to eclipsing of the solar panels. DSCOVR's orbit will put it in it's Sun Exclusion Zone in about 2020 where the communications line of sight will be too close to the Sun, so there is a planned orbital correction there to handle the situation. You can see from the image the insertion point labeled LOI, and about a dozen cycles in five years. The horizontal and vertical periods are almost the same for this orbit. From Lissajous Orbit Control for the Deep Space Climate Observatory Sun-Earth L1 Libration Point Mission 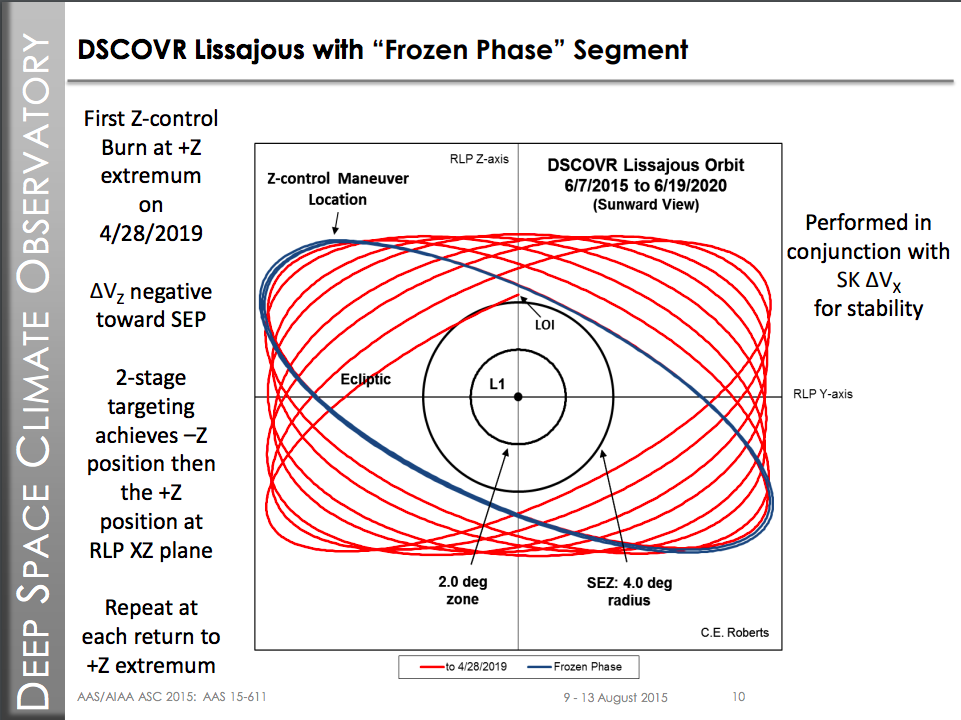 After 2020, DSCOVR will have to burn fuel every 3 or 6 months to stay on that ellipse and avoid the Sun exclusion zone, which will then run out around 2028.

To read further about equations for calculating Halo orbits and some Python, see

Also see these questions and their answers:

22
Why are eclipses of the James Webb by the Earth or Moon not permitted during the mission?
11
Are large halo orbits around L₁'s and L₂'s preferred over small orbits for reasons other than geometry?
17
Are some Halo Orbits actually Stable? (stable orbits about unstable Lagrange points)
14
How to best think of the State Transition Matrix, and how to use it to find periodic Halo orbits?
10
The design of the halo orbit of the James Webb Space Telescope
17
Halo vs Lissajous orbit: Which station-keeping strategy to select and when?
11
What sort of orbital elements are used to describe halo orbits?
5
Where did the Herschel Space Telescope go in 2013?
6
Why put DSCOVR in a Lissajous orbit? Wouldn't a halo orbit completely avoid the Sun exclusion zone?
4
Can mascons have Lagrange-like points? In principle? At the Moon?
See more linked questions

5
What is the period of halo/Lissajous orbits?
6
Difference between Tundra and Molniya orbits?
4
Do ("non-halo") Lissajous orbits have stable/unstable manifolds?
3
Rendezvouses in halo or lissajous orbits
5
Can L3 have halo orbits?
3
Was Queqiao in a halo or Lissajous orbit? Why do sources disagree?