Would recovery from these three problems on the ISS each require astronauts on board?

YouTube auto-played this to me after Scott Manley. I don't really recommend this channel as there are a lot of small errors due to the speaker's unfamiliarity with the science and mis-speaks like altitude where it should be attitude or lifting a paragraph of an Astronaut's published article in Space.com without crediting the print source or providing a link.

The context is that the ISS needs astronauts on-board to help solve problems like these. But would recovery from these three problems have each required astronauts on board?

All of these problems were mitigated because of the collaborations between engineers on the ground and in the station. 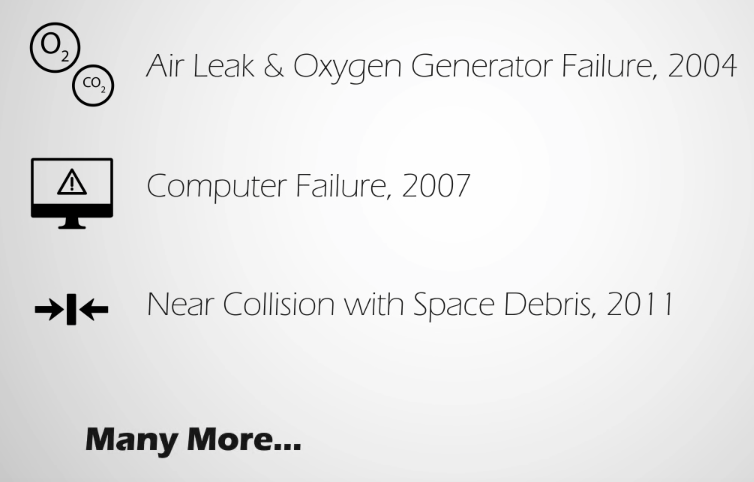 According to the NYTimes

In the section of the station run by the United States, astronauts closed the hatches in case the debris — commonly known as space junk — crashed through, to limit the danger of explosive decompression

So action done by the astronauts would have helped mitigate an actual collisions.

According to Space Safety Magazine

And this video of astronauts fixing a leak. Youtube

This is an actual video of the astronauts fixing the leak.

In June 2007 while the Orbiter Atlantis was docked at the ISS during mission STS-133, all 3 of the Russian segment GNC computers crashed. This left the ISS without the ability to do any propulsive maneuvers, had not the Orbiter been docked.

STS-117 was installing new solar arrays and the Russians were quick to blame power supply problems related to this for the failures. However, investigation showed that the actual problem was poor design of the computer system (which resulted in a zero fault tolerant situation) and their cooling systems (which led to corrosion issues).

In the weeks that followed the crisis and apparent recovery, station commander Fyodor Yurchikhin and his fellow cosmonaut Oleg Kotov disassembled the boxes and cabling and inspected every angle of the hardware, occasionally assisted by their American crewmate, Clayton Anderson. Multiple scopes and probes had failed to find the flaw, but their eyes and fingers eventually did.

The connection pins from the power-monitoring device they'd bypassed earlier, they found, were wet--and corroded. The final report described the ”change in appearance” of fasteners on one box's connectors and noted ”the presence of deposits and residue on the housings, and residue and spots on the contact surfaces.”

Continuity checks found that specific wires, called command lines, in the cable coming out of the device had failed. And one of those lines had short-circuited. Also, in a shocking design flaw, there was a ”power off” command leading to all three of the supposedly redundant processing units. The line was designed to protect the main computers, which are downstream of the power monitor, from power glitches too great for normal power filters to protect against. It does so by turning the computers off when it senses trouble. But in a failure unanticipated by its designers, this one command path itself was able to kill all three processing units due to a single corrosion-induced short.

During the next shuttle mission

During the August shuttle visit, the Russians were able to turn stabilization control over to the American spaceship and tear down their old computer network. The boxes and cables were replaced with fresh units, built and supplied by the European Space Agency and sent up inside a recently launched robot supply ship.

Multiple scopes and probes had failed to find the flaw, but their eyes and fingers eventually did.

lends credence to the claim that recovery required astronauts on board. Also, the design error which resulted in a loss of redundancy / zero fault tolerance would have kept the ground from simply switching to a different computer.

Note, however, that the ISS was not designed to operate uncrewed for long periods of time, so it is unrealistic to expect it to be able to respond to failures without onboard intervention. See this question and its answers: Why has the ISS not been left unmanned?

Not the answer you're looking for? Browse other questions tagged iss in-space-repairs or ask your own question.

25
Why has the ISS not been left unmanned?
6
How would the International Space Station be maintained unmanned?