What happens to the acoustic energy removed by a sound suppression system?

I was just watching this video of a launchpad sound suppression system, and realized if it removes acoustic energy from the air, the energy has to go somewhere.

Does the water heat up? Will any of it get hot enough to boil? Maybe evaporate a little?

Yes, the water heats up. Lots of it evaporates. There is a system to catch and filter the remainder, which is polluted with combustion products of the SRBs. 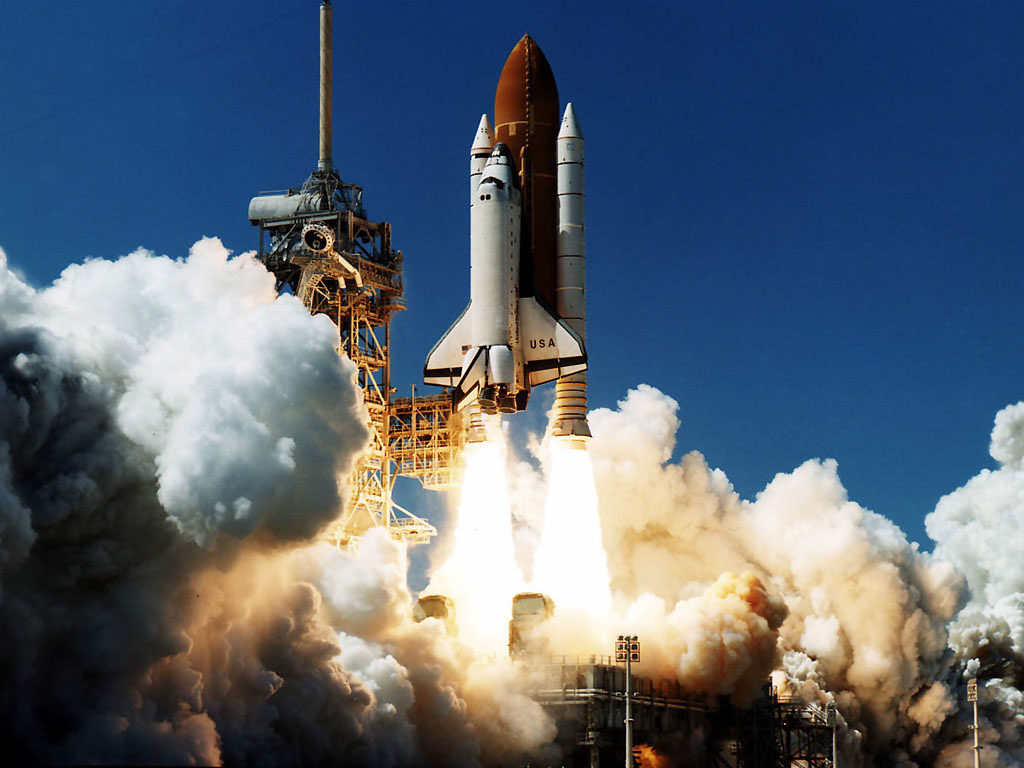 Those massive clouds in the foreground are water vapor mixed with combustion products of the SRBs.

For the Shuttle, this report states that 166 tonnes of water is evaporated, out of 1135 tonnes supplied by the suppression system. But that's an incomplete number.

Another source has these numbers for the the deluge water:

The mechanism seems to be that air bubbles in the water are compressed by the sound waves passing through, this compression generates heat. See this related question.

tl;dr: water droplets scatter the sound keeping it more localized, and also absorb some of it, while some is also absorbed in all the other surfaces the sound strikes. There's no where near enough power to boil this much water.

Sound in the air at these (audio and sub-sonic) frequencies pretty much always ends up as mostly heat.

Ultrasonic sound can be use do work on the surface tension of water (ultrasonic atomizers, humidifiers, etc) but when that's used in a practical way the wavelength is usually millimeters and the corresponding frequency in MHz so the sound pressure can be focused to a small, high-intensity area for more efficient disruption of the surface into droplets.

But that's not what's going to happen here.

For audible and sub-sonic rocket launch sound, the deep sub-wavelength but high density droplet dispersion will diffusely scatter the sound waves, decreasing their mean free path and therefore increase the time for the sound energy to be mechanically absorbed, both by the droplets and by any other local surfaces the sound reaches.

How much energy and therefore heat are we talking about here?

Until dB levels with their corresponding distances and measurement conditions can be found, here is a walkthrough of the conversion process and are some rough estimates:

So far I found a sound level of about 160 dB at 125 feet in this answer and 180 dB in the payload bay of the Space Shuttle in this answer but these are not helpful; the first one is with the sound suppression in place, and the second is in a confined, closed space.

But I'll show how to do the estimating calculation here in hopes we can get better numbers.

In this excellent answer to my question How much power and energy is (actually) in a 230 dB “click” from a whale? the equation was derived as follows:

The largest number I saw was in this answer

If we were to try to use the same 38 meters distance, 50 dB is 10^5 means 1.5 megaWatts, and that could potentially boil a few kilograms of water per second if it were concentrated on a few kilograms. But that's not the case, the sound is dispersed over many tons per second of water and the ground and other surfaces.

There are more dB values in this answer but they don't have a clear geometry description.

No, no water was harmed boiled in the making of this film orbit.

Not the answer you're looking for? Browse other questions tagged launchpad acoustic-sound-suppression or ask your own question.

15
How close can I get to a rocket launch and not get killed?
11
How does a water based acoustic suppression system work?
7
Is the Falcon Heavy as loud as the Space Shuttle or Saturn V?
6
Deluge system refresh rates

6
Why does the New Shepard vehicle not have an exhaust trench?
2
Space elevator/tower through magnetic repulsion? What are the technical problems?
4
What are the advantages of water-based sound suppression vs. cliff-based launching?
11
How does a water based acoustic suppression system work?
1
What's the geometry of Ignition Overpressure Protection system protecting rocket launches?
7
Why don't we use sound suppression system when rocket lands propulsively?
4
Do the Russians use a water deluge system when launching their current rockets?