If a human is being sent to space in a rocket, does the seating angle matter? 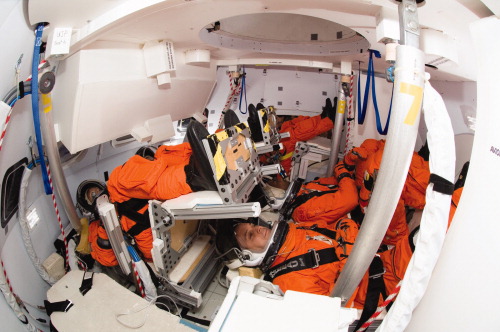 The human body tolerates G-forces best if they're perpendicular to the spine.
When you apply a G-force along the spine, the blood will gravitate towards the feet, leaving the head starved of blood, which induces loss of consciousness. Having the head at the lowest position helps to prevent these blackouts.
3G is tolerable even if you're facing down, by the way. The seating position in capsules is chosen to support the body during landing (the forces in reentry and landing are larger than during launch).

let us take the shuttle

which means 29/9.8 $/approx$ 3 In such a case the force acting on the body is would be tremanderous so if your seating position is in opposite direction the force is strong enough to crush your ribs(chest) and the broken bones from the ribs can even penetrate leading to death or it can causebreathing problem and even cardioc attack.

Interestingly, the Soyuz capsule has seats that change orientation at landing time.

They are mounted appropriate for absorbing G-Loads the best at launch. Then seconds before landing, the seats change orientation to prepare for better shock absorption of landing.

Apollo's seats had shock absorbers for landing, and required a certain depths for 'travel' which was an issue they has to consider when they designed the Skylab rescue Apollo for the worst case of a disabled Apollo at Skylab. They would need to carry at least 4 people, (one pilot up, 3 down, more likely 2 up so they could work as a team and three down) which meant 2 rows of seats, which the travel requirement caused issues with making it all fit.

Not the answer you're looking for? Browse other questions tagged crewed-spaceflight astronauts spacecraft-development or ask your own question.

31
How was the Skylab Rescue mission supposed to return 5 astronauts?
5
What is the best position for a human to be in during launch?

12
What is the most sustainable method of recycling (human) solid waste on a manned space vessel?
14
If I want to be an astronaut pilot, what career should I start?
14
Has any spacecraft had a way for the crew to escape during reentry?
12
How much of the International Space Station annual operating costs are due to human crew?
4
What is the “75 percent version of Dream Chaser”?
4
When astronauts or cosmonauts get seated in the spacecraft, are they actually sitting up or lying down?
8
How much jerk do astronauts experience? Is there a safety limit?
32
Has the ISS ever not had a lifeboat?
31
How was the Skylab Rescue mission supposed to return 5 astronauts?
5
Why is a seated posture for astronauts preferred over a standing posture?