Was there a prototype for Solar Probe's hybrid Heat Shield/Antenna?

An early concept of the Solar Probe (reborn as Solar Probe Plus then Parker Solar Probe) used a parabolic antenna with a heat-resistant nadir facing side to double as a heat shield.

While sourcing this answer on Solar Probe Plus's mission design, I found in Chapter 9; Miscellaneous Other Antennas the substantial discussion of a unique design. The section begins:

Although the Solar Probe Mission is in a state of limbo at this time and there are no plans to fly this antenna, it represents such a unique design that it is worthy of being included.

Figures 9a, b are shown below.

Reading the chapter makes it seem like the development of the antenna got much further than I originally thought. For example, it shows a prototype of the antenna's feed assembly.

Was a full-scale prototype made for the Heat Shield/Antenna?

Alternatively, were any major parts of the design created, such as the parabolic dish?

Or did the antenna not get past the component-prototyping stage? Alternatively, have there been further feasibility studies since the concept was dropped for Solar Probe?

Photographs or diagrams beyond those shown in the link above and here below would be ideal. 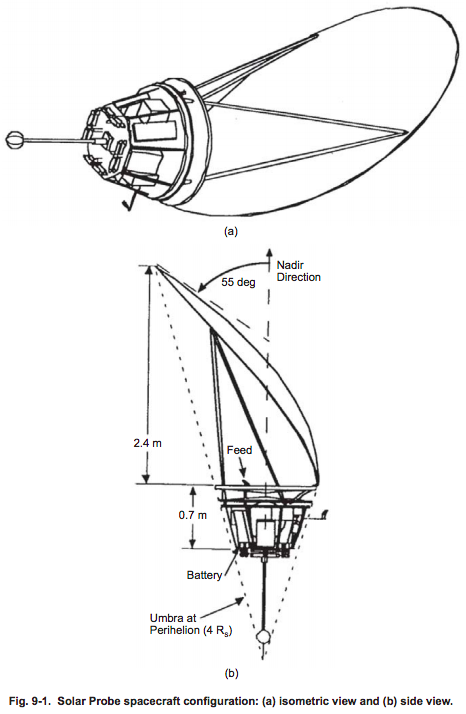 Browse other questions tagged heat-shield antenna parker-solar-probe or ask your own question.

5
Have solid dish antennas on deep space spacecraft (as opposed to meshes) ever provided any other helpful function? As meteor shields perhaps?
4
How would a Jupiter flyby have helped to get to the Sun? Why was it later ruled out?

8
How does the Parker Solar Probe's heat shield protect it from dust near the sun?
8
Why is TESS' high gain antenna made of undulating BLACK fabric rather than metal?
25
Why was the Friendship 7 Mercury heat shield detachable?
8
What is the material and reflectivity of the surface of Parker Solar Probe's heat shield that faces the Sun?
6
Parker Solar probe's heat survival - Heat vs Temperature
8
At what distance to the sun would the Parker Solar Probe completely fail?
5
Active liquid cooling for heat shield
3
How exactly were the signals from quad dishes of Apollo Deep Space High-Gain Antenna or Russian B-529 processed for local control of tracking?
9
What is the pop-up circular disk with spiral pattern in this NASA animation of the Dragonfly helicopter for Titan? Antenna? Kind, band, target?