The sorting of perturbational effects by the power

I have developed an orbital propagation tool, which considers the effects of Sun, Moon, Earth harmonics, SRP, drag, relativistic correction.

Considering the LEO orbit, I would sort the perturbational effects in the following order:

Here is en excerpt from the question Questions about the Dynamic Solid Tide. There is more about those effects in the question and especially in the answers.

As you can see the strengths of several effects depend in different ways on the average distance from the Earth, as they would for other aspects of the orbit's parameters.

In other words, it doesn't really make sense to try to rank them without specifying a specific orbit.

I found the following plot in the book Satellite Orbits; Models, Methods, Applications by Oliver Montenbruck and Eberhard Gill, Springer, 2000. The figure and description can also be found in google books. It's a low quality snapshot but it's hard to capture a dozen different dependencies over 20 orders of magnitude without showing the whole thing.

If of help, from my old Orbital Mechanics courses we have this plot (in Spanish). 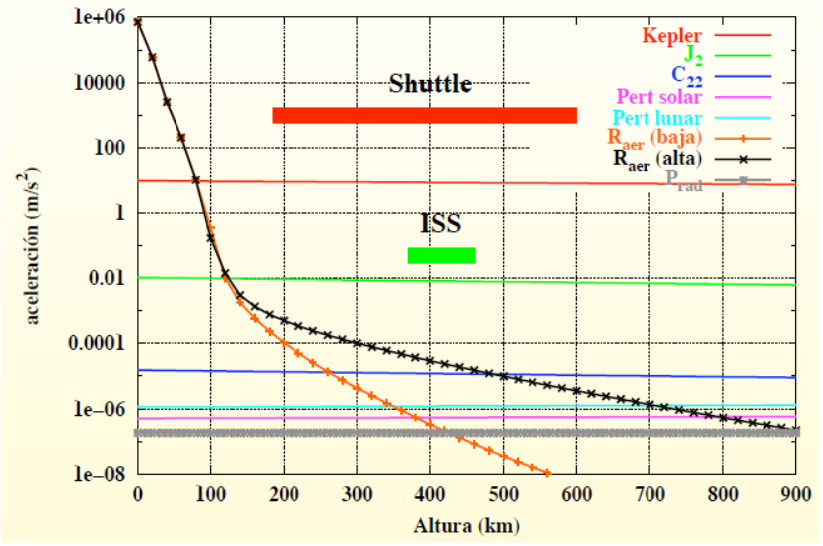 There are two plots for drag ($R_{aer}$) because it depends on the atmosphere of that day, but you can have an idea. The only remark I would made is that for LEO Moon effect is always higher than the Sun's ones. The bars of Shuttle and ISS denotes the range of altitudes for those.

Regarding Earth and ocean tides I am sure that they can be modelled as spherical harmonics also. Anyway I am pretty sure that their effect is at least lower than solar radiation pressure.

6
How significant is orbit propagator choice/error when considering a year-long satellite coverage simulation, and which is the most appropriate?
7
At what altitude do the effects of atmospheric drag completely disappear?
2
Which perturbs LEO satellites more, the Moon's gravity directly, or the changes in Earth's gravity field due to the Moon?
2
Questions about the Dynamic Solid Tide
1
Which orbit around Earth has the least perturbation?

15
Why is momentum transferred to the moon?
22
How did NASA Conclude that the General Theory of Relativity was not Needed for Earth-Moon Flight Path Computation?
2
Questions about the Dynamic Solid Tide
6
J2 long-period perturbations in the inclination
6
Could daily variations of weight on Earth really be 0.003%?
4
A software for orbit propagation, considering Moon, Sun and zonal harmonics
8
Usage of the coordinate systems in orbit propagation
7
Orbital propagation: atmospheric drag
6
How significant is orbit propagator choice/error when considering a year-long satellite coverage simulation, and which is the most appropriate?
5
Are the initial conditions for the Apollo PFS objects' orbits known (or knowable) as well as they were for the ascent module?