How many space-craft can a station on the DSN communicate with concurrently?

A bit of spin on Which LEO missions are currently supported by NASA's DSN (and why)? is what I have in mind.

Each complex consists of at least four deep space stations equipped with ultrasensitive receiving systems and large parabolic dish antennas. There are:

• One 34-meter Beam Waveguide antenna. (Three at the Goldstone Complex and two in Madrid)

Apparently each station is commanded remotely as mentioned on that page

All the stations are remotely operated from a centralized Signal Processing Center at each complex. The Centers house the electronic subsystems that point and control the antennas, receive and process the telemetry data, transmit commands, and generate the spacecraft navigation data.

There are any number of space-craft operating in space

What I'm curious about

Yes, a station can communicate with more than one spacecraft, but not the way you suggest.

Each DSN complex consists of several antennas, each of which is called a Deep Space Station. A "station" is one antenna. Each antenna has a single transmitter, so any one station can only transmit to one spacecraft at a time.

Below is the DSN display showing MRO and Odyssey on the same antenna (DSS-43). You will sometimes see the opposite, where there is one spacecraft on two or more antennas, like Maven on DSS-34 and DSS-45, also in the picture below. When at the same complex, that is called "arraying", where the signal from two or more antennas are combined to simulate a larger antenna for increased data rate. That also only works for receiving. Antennas cannot (today) be arrayed for transmitting. You can also see the same spacecraft on two different stations at two different complexes. In that case either the spacecraft is in the middle of a handoff from one complex to another to make for one long communication pass, or a special navigation data type is being collected using very long baseline interferometry. 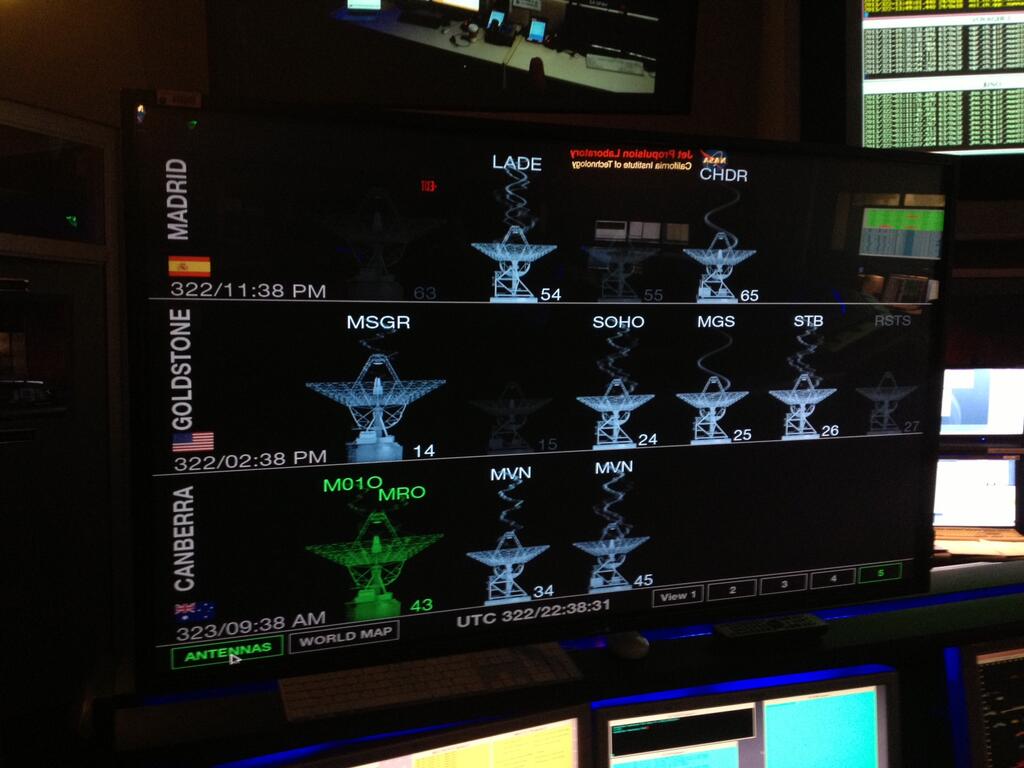 Time multiplexing is not useful, since it can take quite some time to lock on to and acquire a signal. Once you have it, you don't want to lose it and then have to find it again. It is better to have multiple receivers.

I suppose that in effect we do use time multiplexing of the antennas, but on the scale of hours. Since it takes around half an hour to lock on to a signal, you stay with it for at least a few hours, usually eight to ten hours, and then switch to another spacecraft.

As for the "algorithm" used to point an antenna, we have very accurate models of the position of Earth, the position of any given antenna on Earth, and of the target spacecraft. You just compute the vector to the target and point the antenna in that direction. The direction changes with time as the Earth rotates (and as the Earth and target move relative to each other), so the vector is continuously updated for the antenna to track the target. (I'm not clear on your question there, so if this doesn't answer it, then you need to clarify the question.)

Not the answer you're looking for? Browse other questions tagged communication deep-space-network or ask your own question.

11
How does NASA get information from space probes?
7
How do we track the exact location of the spacecraft which is millions or billions of miles away from us?
4
Which LEO missions are currently supported by NASA's DSN (and why)?
2
How many hours each day is Mars reachable by 2 of the 3 DSN complexes?

8
Is it possible for the Deep Space Network to use MSPA and antenna arraying simultaneously?
11
Why doesn't thermal radio emission from a DSN "hot dish" completely swamp the benefits of a cold LNA?
2
How many hours each day is Mars reachable by 2 of the 3 DSN complexes?
8
"Luckily with no Lunar Module, Tidbinbilla was able to keep tracking with no interruption..." Why is no LM significant?
1
Does a deep space network benefit by having a diversity of latitudes?
22
Why was Canberra able to listen to Voyager 2 but not talk to it?
1
Will future deep space optical communications "ground stations" actually be in space, or on the ground?
3
What is a Beam Waveguide dish and why do deep space communications stations use them?
7
Why are modern satellite ground station and deep space communications dishes with secondary mirrors almost always Cassegrain?