Did the astronauts of the Apollo 11, 12, 14-17 take stereoscopic pictures of the lunar landscape?

I know many stereoscopic images were taken by the US probes that landed on Mars but I cannot find similar pictures for the Moon.

I would be especially interested to see such double photos that show distant hills or mountains in the background.

Using your answers I finally found what appears to be stereo pictures showing lunar mountains. One example is the anaglyph labeled AS15-82-11053/4. However, there should not be shifts between the cyan and red pictures for the distant mountains as long as the two colors perfectly match in the case of the closest mountain to the camera.

From your answers, I can infer that true stereo pictures, taken from the surface of the Moon by the astronauts, showing distant mountains in the background, do not exist and what can be found on the internet are simply things that imitate up to a certain point true anaglyphs. 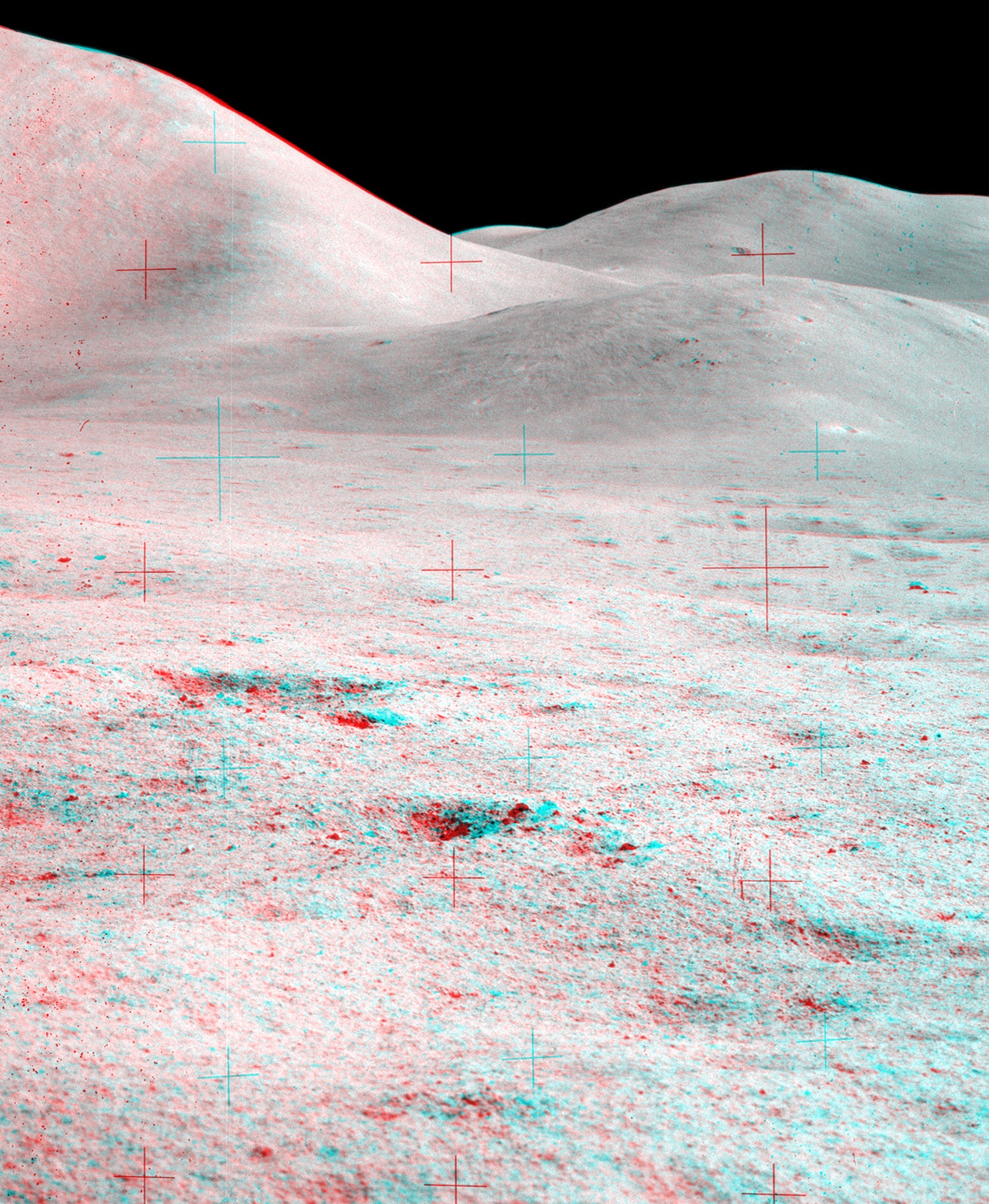 Yes indeed, stereo images are available from the Apollo missions.

Apollos 11, 12, & 14 carried a stereo camera for taking close-up images of the lunar soil, small rocks, & other small items of interest. The Planetary Society has some of these images converted to anaglyphs (the red-blue or red-green method).

Also, sets of other non-stereo images have been "re-mapped" to synthesize stereo pairs, as done for Apollo 11 and Apollo 14 images.

Apollo 15, 16, 17 used the Lunar Mapping and Panoramic Cameras mounted in the forward portion of the Apollo Scientific Instrument Module (SIM) in bay 1 of the Service Module.

The camera system consisted of a 76-mm (3-in.) Fairchild mapping camera (SIM3) using 5-in. film, a 3-in. stellar camera using 35-mm film, and a laser altimeter.

The mapping camera system flight plan was devised to provide 78% overlap between successive images photographed in the same pass, when the spacecraft was at the altitude at which the velocity/height (V/H) sensor was set, and approximately 55% sidelap between adjacent photographic passes; the stellar camera (SIM4) provided attitude information; and the laser altimeter (SIM2) provided measured distance from spacecraft to lunar surface in synchronism with each mapping camera exposure. The 78% overlap provided stereo coverage that can also be used for topographic information.

So stereoscopic images of hills or mountains were possible, but only viewed from orbit, not from lunar surface. I found no anaglyph images prepared using these cameras. There may be some to find by somebody else with more luck or by very intensive searching.

Quotes from a NASA paper. See also this NASA page about the SIM bay cameras.

I saw a moon 3d set through a stereo viewmaster. It was of cooled lava formation on moon. It made the holes in the formation look totally 3d. My dad married a lady whose ex worked in the JSC photo dept. The slides were in his stuff when he died. One of the rarest NASA items that I have ever seen!

6
Did Apollo-11 astronauts rehearse their photoshoots on Earth?
6
Were panoramic images taken during Apollo 15 planned and trained before on Earth?
2
When was stereoscopic photography first used intentionally on solar system body?

26
How was dust-mitigation addressed during the Apollo program?
8
Might thermal mass, reflective insulation, and limiting light penetration allow heat control on the Moon? (reboot)
6
Were panoramic images taken during Apollo 15 planned and trained before on Earth?
2
Colors of the Moon totally different in the pictures taken by Chang'e-4 in comparison with the Apollo photos. Why?
15
Importance of moon phases for Apollo missions
2
Was there a measurable effect on gas concentration on the Moon during the Apollo missions?
9
Did Apollo astronauts play on the Moon their pre-recorded music?