Were panoramic images taken during Apollo 15 planned and trained before on Earth?

I followed a link in an answer to the question about stereoscopic images and found a long list with panoramic images composed from images shot with the lunar Hasselblad cameras.

For instance the ALSEP pan at the end of EVA 2, assembled by Dave Byrne.

Made from 17 separate images, more than 360 °, see the shadow of photographing astronaut at the left and right side of the image.

I tried automatic stiching of the same images using a free demo version of AutoStich with a very good result without any manual intervention:

But there were also panoramic images taken with the 500 mm lens.

See this question about the 500 mm lens and its viewfinder. Due to the very small horizontal angular field of only 6.5 ° overlapping did not work well for all 5 images. There are a lot of other panoramic images with successful overlapping done with the 500 mm lens.

A panorama taken at Station 2 of Trophy Point using the 500 mm lens, assembly by Dave Byrne:

No problems with overlapping, but a constant small rotation of the camera around its optical axis.

Unsurprisingly, yes. The book "Science Training History of the Apollo Astronauts" mentions training for photographic panoramas in several places. (These quotes may not be specific to Apollo 15 but it's clear from the book that it was common to all missions).

Muehlberger describes the procedure for the panoramas that were taken at each station just after the crew dismounted from the Rover: “The first guy off goes out a short distance and takes a 360 - degree film panorama while the other guy’s getting all the tools out, and this sort of thing, and getting ready to start work. While this guy’s doing this panorama, he’s sort of looking around and saying ‘Well, there’s a rock over there we’d better sample, and we’d better do our core over here , ’ trying to design what’s going to happen in these next few minutes that was assigned to that place. Th e panoramas were important because after they were all done, before they left, then the other guy took one from a different place, and that one showed, of course, all their footprints. You could check to see which rocks were now missing. You could add in some other details that way. If they still didn’t know where they were, you could use those two panoramas, because there’s now a stereobase, and you could look at the distant mountains and play triangulation games and locate the actual craters they were standing by on the Moon”

“ Panoramas were taken at each station to permit precise location of the station by resection and to illustrate and supplement geologic descriptions by the crew. A complete panorama consists of 15 or more overlapping photographs, covering a total of 360 ° . The overlap zones between pictures in panoramas can be viewed stereoscopically because the aiming direction of the camera was changed and the lens position was shifted slightly each time a picture was taken. This provides a stereoscopic baseline a few centimeters long, which is useful for study of topography within 50 to 100 m of the camera. Pictures were taken with a 500 - mm focal length lens on a Hasselblad camera to permit study of features inaccessible to the crew. 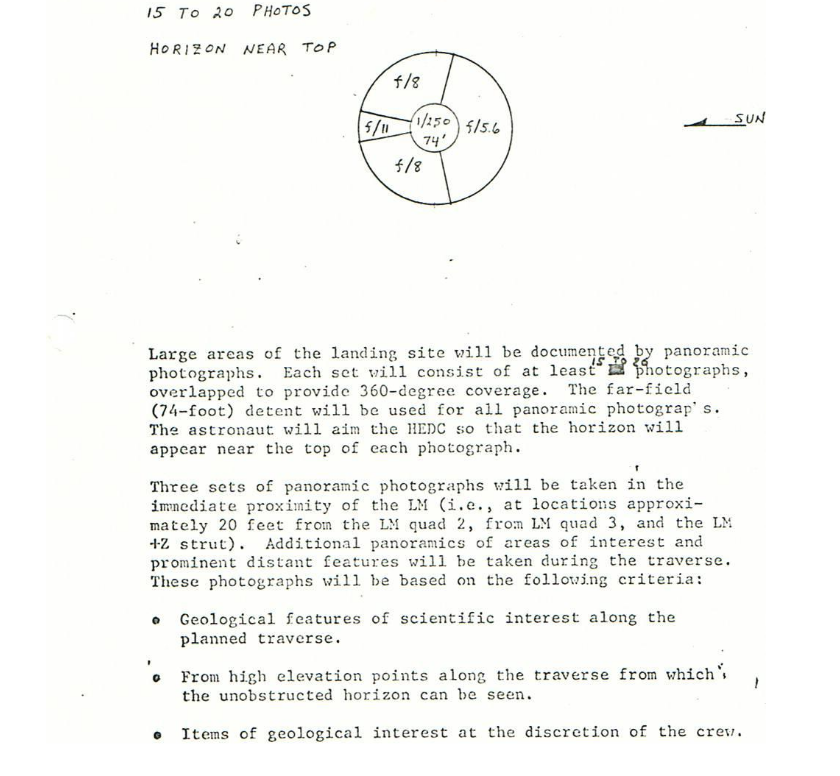 For an Apollo 15 specific reference, here's a panorama called out in the cuff checklist: 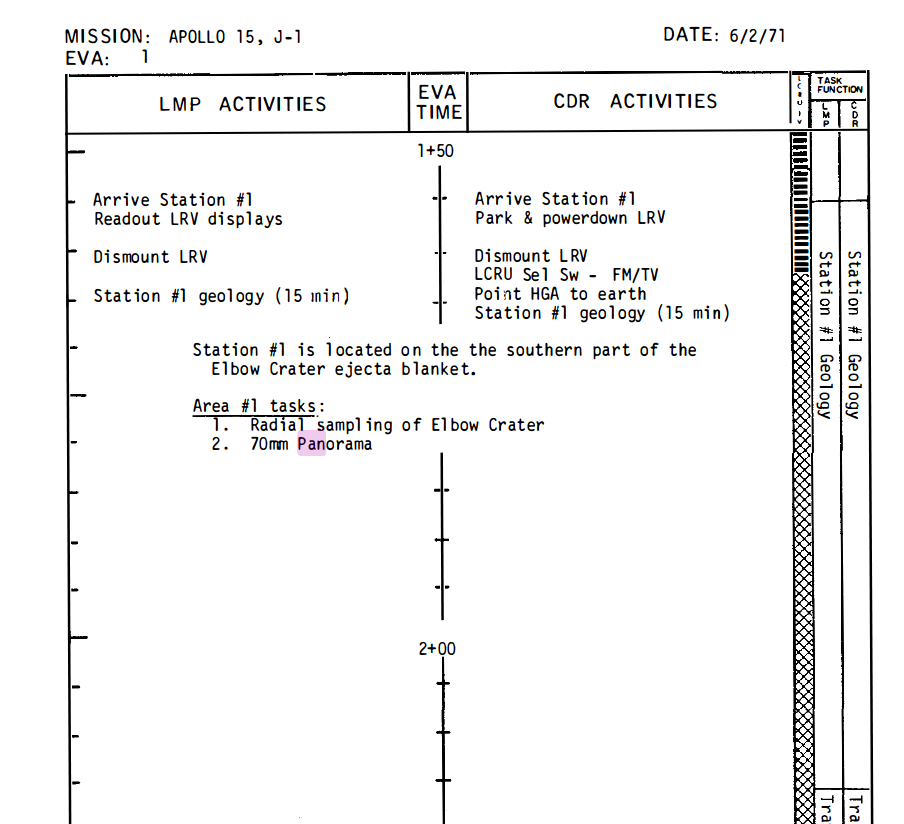 From the book "Science Training History of the Apollo Astronauts", link from Organic Marble's excellent answer on page 138:

Overlapping the images for a panorama was learned by try and error during the field exercises. Developing and mounting the panoramas was done during the night by a special photo lab team. What took hours in the photo lab is done today in some minutes using a digital camera and a laptop.

Not the answer you're looking for? Browse other questions tagged the-moon training imaging or ask your own question.

19
Usage of Apollo Lunar Surface Hasselblad Camera with 500 mm lens?
14
Were stereoscopic pictures taken during the Apollo missions?
6
Did Apollo-11 astronauts rehearse their photoshoots on Earth?

20
Apollo communication between the Earth and Moon
13
What are the “crossing beams of light” in the Cassini images taken during Enceladus plume flyby?
2
When was stereoscopic photography first used intentionally on solar system body?
2
What causes these cross-shaped artifacts in TESS' first images?
14
Were stereoscopic pictures taken during the Apollo missions?
2
Chang'e 4, what is planned during December 12 and January 3?
25
Were there any unmanned expeditions to the moon that returned to Earth prior to Apollo?
2
Why is there no image of the Earth taken from the lunar surface during Apollo 12,15 and 16?
1
How (the heck) does SOHO's SWAN camera image the entire 4π sr celestial sphere?
3
How did images taken by Perseverance's landing stage reach Earth despite its crash landing?