What is the point of rotation of an "umbrella ship"

Some nuclear powered spacecraft designs have been entertained where the radiator is arranged in a plate geometry which rotates. For example:

This doesn't make any sense to me, because the nuclear reactor would have to be situated at the center. All the designs are consistent with this. So that means that hot coolant flows out and cold coolant flows back in. Doesn't this mean that you'll be fighting natural circulation? If the hot coolant is less dense than the cold, then there's a driving force in the reverse direction of flow due to the centripetal force being stronger on the cold fluid than on the hot.

Given that, why do any of these designs propose to rotate in the first place? For natural circulation, the reactor is in the wrong place. So what was ever the logic behind that? Is the idea to use some exotic fluid that decreases density with rising temperature, or is there some other motivation?

The only reason for it that is explained elsewhere and I can find is in the first link that you give, and suggests that the rotation creates centrifugal force for the silicon oil coolant to be drawn through the "umbrella" radiator from two feed pipes rotating around the inner edge and moving it towards the radiator's outer edge.

I would wager though that there isn't a single reason for it but that it is a systemic solution that helps shift mass towards the parasol radiator and enables the use of a longer boom, so the reactor stays sufficiently distanced from the habitat ring, which helps add to the total inertial mass that rotates the electricity generator required for the ion drive, and radially distributes the coolant along the radiator feed in the opposite direction to the radiator (they're fixed to the boom which is rotated in opposite direction so the boom on which the ion drive is mounted stays directionally fixed, at the center of mass that is clear of obstacles and so usable for the "Mars Umbrella Ship" propulsion). At least, this is what I understood from this image and its caption: 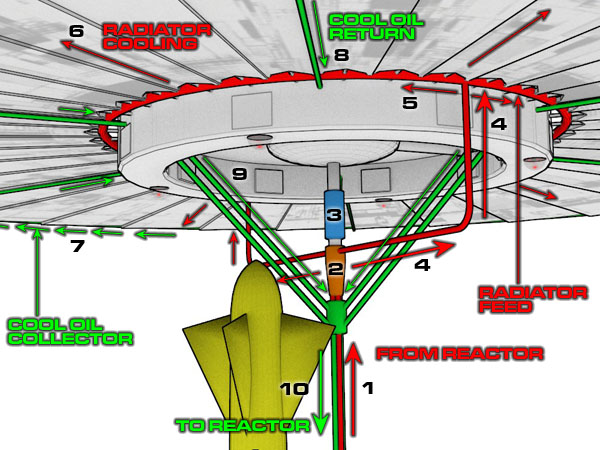 (1) Hot silicon oil from reactor enters (2) turbine, spinning it. Turbine spin drives (3) generator,
creating electricity for ion drive. (4) Hot silicon leaves turbine and enters (5) radiator feed ring.
The ring feeds the hot oil into inner edge of (6) heat radiator, where the oil is drawn through
radiator by centrifugal force and cooled. Cool oil enters (7) collector at rim of radiator and is fed
into the (8) return pipes and sent to the center. There the cool oil enters the (9) return manifold
where all the cool oil is (10) sent back to the reactor to start the cycle again.

Interestingly though, rotation of the habitat ring and the radiator umbrella isn't mentioned in Walt Disney's Mars and Beyond (YouTube video) and the umbrella ships aren't animated to rotate their radiator part either, merely that the hot coolant exiting the nuclear reactor rotates the generator that produces electricity for the ion drive.

So to me, it doesn't seem there would be any point in rotating the umbrella even if that would help distribute the coolant (there are other, simpler ways of achieving that, and you already mention circulation of it through convective heat transfer, which does seem should do the job), especially since all these drawings and animations include an auxiliary landing vehicle mounted on the thrust chamber assembly, that would shift the center of mass off the axis the umbrella part would rotate, making the whole system rotationally unstable and introduce a wobble. For example, even if this is solved by counterweights, it unnecessarily adds weight to the whole system, and it doesn't explain what happens when the auxiliary mounted landing ship departs and ascent stage later docks with the umbrella ship either.

Frankly, all of it seems way too complicated, at least how it is explained in sources claiming the umbrella radiator and the habitat ring to rotate, all of it merely to gain centrifugal force equal to 0.05 g (roughly 1.5 revolutions per minute) and radially distribute coolant along its surface, and it still doesn't answer questions regarding system's stability when some of this mass is detached from it or later (less than we started with) reattached. Odd indeed.

Not the answer you're looking for? Browse other questions tagged thermal rotation or ask your own question.

33
Why is the rotation rate of Venus so slow?
8
What is "forward rotation" of a spacecraft?
1
Earth rotation confusion on Stapledon book
2
Does Jupiter's high rotation speed affect its gravitational strength at the surface?
5
Would space ship/station rotation for artificial gravity cause the "axis" to also rotate?
7
How to calculate the speed of rotation of a given point on the Earth's WGS84 ellipsoid, about its axis?
6
How much does the rotation of the Earth affect re-entry and could we go against it?
2
Does "Air Launch to Orbit" makes the best use of Earth's Rotation?