At what magnitude of planetary mass are Mascons a problem for orbiting spacecraft?

Earth's mass is about 1E+25 kg, the Sun about 2E+30 kg, and the Moon is only around 7E+22. Lunar orbit has well known problems with mascons and while the earth still has perturbations due to mascons, they are seemingly more benign (addtl). 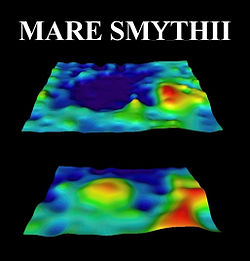 Example of a large mascon on the moon.

Would the Sun's be even less noticeable provided we didn't burn up upon approach? What is the maximum density of a naturally occurring mascon and would it be enough to be noticeable on something with a mass as large as Jupiter? Or what is the biggest planet required for a mascon of maximum elemental density to not be noticeable?

@Fred is correct with his answer, but there are interesting ramifications—and qualifications—to add.

As long as you can generate a higher-density region of unconstrained excess mass, there is no limit to how big a planet can be and still have mascons that significantly perturb orbits. When I say "higher-density", I mean a density higher than the typical material that's at the same distance from the center of the planet. And when I say "excess mass", I mean the mass difference between the mascon and the same volume of material with the same density as the "typical material".

You can have huge density concentrations in a planet's core, but because that's pretty close to spherically symmetrical (as regards the gravity field geometry beyond the planet's surface) it doesn't affect orbits as much as mascons near the planet's surface. The mascon has to be something that really perturbs spherical symmetry. That's why @Fred correctly states that if a big planet had a bunch of evenly distributed mascons they wouldn't have much effect. That even distribution better approximates spherical symmetry than one big, hulking blob of a mascon.

But physics gets in the way of that "unconstrained excess mass". The bigger a planet gets, the larger the magnitude of its gravitational acceleration, and the larger (in terms of total mass) a mascon has to be to make a significant perturbation to the planet's potential field. [The vector gradient of the scalar potential field gives the gravitational acceleration] A large mass in a strong gravity field produces a large force—weight—on the material supporting it from below. If the gravity is strong enough, and the mass large enough, the pressure due to the mass's weight is larger than the strength of the supporting material beneath it, so the material deforms (flows plastically)...and the mascon sinks!

This actually happens on Earth. When geologic forces produce a pile of rock more than ~9 km high (more than that if it is partially buoyed by ocean water), the pressure at the bottom of the pile is greater than the strength of solid rock (even igneous rock, like granite or basalt, which yields the 9 km figure; weaker rocks reduce that figure), and the rock flows plastically, and the pile shrinks. The Hawaiian Islands are a good example. Volcanic activity builds piles nearly 10 km high (from the ocean floor) and they immediately start sinking into the basaltic crust below. Slowly, yes, but sinking nonetheless. Bathymetry shows the distortion of the crust around the islands.

Now imagine even stronger gravity (maybe much stronger!), large density contrast, and larger mascon total volume, large enough to make a significant perturbation in the gravity field of a really large planet. That mascon sinks, until the material around it is only a bit less dense than the mascon itself, and the surrounding material's strength can support the mascon's buoyed weight. If that's deep enough that it's in the planet's aesthenosphere (temperature high enough that the material flows relatively easily under large stresses) then the surrounding material has essentially no bearing strength and the sinking continues until the surrounding material is just as dense as the mascon ("isostatic equilibrium", just deeper than the term is usually applied). At that point it ceases to be a mascon!

The precise size of a planet whose gravity is so large that it cannot support any kind of significant mascon (without isostatic disequilibrium sinking it) depends hugely on the materials the planet is made of. But I suspect that a Jupiter-sized planet made of silicate minerals and metals instead of mostly hydrogen and helium isn't going to support much of a mascon!

I think you may be looking at the issue too simplistically.

Mass concentrations are a function of differences in material density. The overall effect of mascons will be determined by their size, distribution, the number of mascons regions and the difference in density between the mascons and the rest of the planet.

Considering extremes, if a planet of large mass had numerous small mascons, fairly evenly distributed, the overall effect may not be troublesome. But if the same planet had one very large mascon with a significant density difference to the rest of the planet the effect of the mascon will noticeable.

Not the answer you're looking for? Browse other questions tagged mascon or ask your own question.

2
How, and How Well will Juno measure the effects of frame dragging? (GR effect due to Jupiter's mass & rotation)