What was NASA's “LUROVA” Operational Thermal Computer Model analog or digital? How were capacitors used?

The Apollo Lunar Rover had several components with constraints on operating temperature range, and max/min survivability limits. My question How much wax is on the Moon? (Lunar Roving Vehicles) addressed the use of a box of wax as a thermal reservoir - the phase change of the wax (melting/freezing) could be used to absorb thermal energy during times of excess heat production and provide warmth back if something, the batter especially got too cold during periods of no use.

In order to simulate the production and flow of heat in the whole rover, both during transport from Earth and operation on the Moon, detailed thermal modeling was required. To that end, some kind of computer was used to model it.

Does "Electrical Analogy - Capacitors and Conductors" mean that an analog computer was build using resistors and capacitors to model the flow of heat my measuring the flow of electricity?

Question: What was NASA's “LUROVA” Operational Thermal Computer Model analog or digital? How were capacitors used? 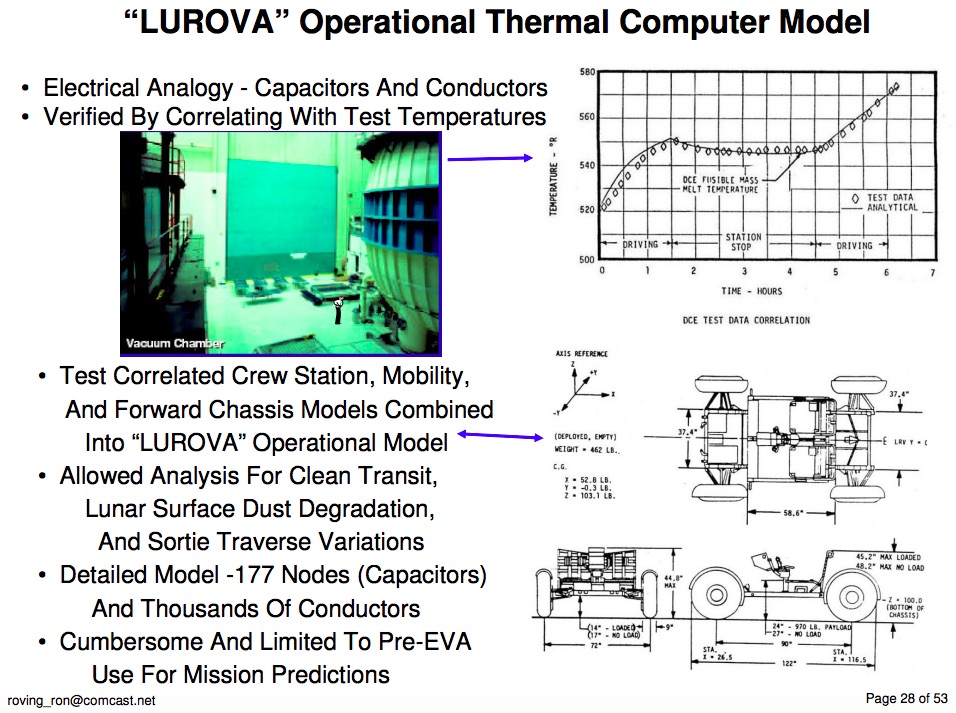 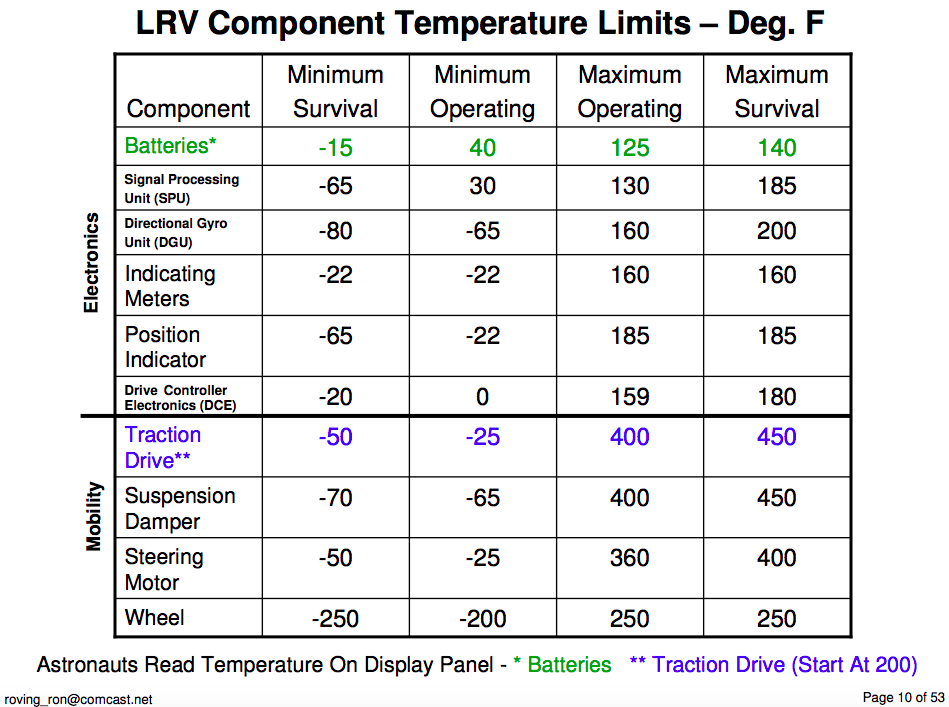 I emailed Ron Creel, the author of LUROVA, and he was nice enough to get back with an answer. (The email address shown in the presentation linked in the question is obsolete, but it wasn't hard to find a good one.)

The LUROVA program was run on a digital computer, specifically the Univac mainframe mentioned in the presentation. Here's an extract from the email he sent me.

Attached is a description of the SINDA - the Systems Improved Numerical Differencing Analyzer, which is the digital computer program we used at the start of the Lunar Rover program - i.e. for Apollo 15 test correlation and thermal models for mission support. We would take pre-mission planned traverse information from JSC and run the 181 node model before and in between sorties on the Moon. Changing and punching new cards was quite awkward and time consuming for this way of getting the job done. ....we represented the Rover with nodes (capacitors) and conductors in our thermal models, which started out being run on the good old UNIVAC 1108 mainframe computer.

The capacitors were nodes in the simulated thermal network, as stated in one of the documents he sent me (SINDA user's guide)

SINDA, the Systems Improved Numerical Differencing Analyzer, is a software system that possesses capabilities which make it well suited for solving lumped parameter representations of physical problems governed by diffusion-type equations. The system is designed as a general thermal analyzer accepting conductor-capacitor (G-C) network representations of thermal systems. Sinda can solve other types of problems that can be represented as G-C networks.

Reference - as stated. (emphasis mine)

Not the answer you're looking for? Browse other questions tagged apollo-program thermal thermal-control calculation lunar-rover or ask your own question.

5
How much wax is on the Moon? (Lunar Roving Vehicles)
4
JWST -- thermal control predictions