Is the Pulse detonation engine feasible

Now this is a big question and we'll need to fix it and make it more specific but I don't know how .

I recently started reading up on alternative concepts and one that was talked about was pulse detonation, which is an instantaneous combustion unlike conventional rocket engines which is deflagration. The concept has detonation happening in pulses and then it sustains thrust due to these impulses. This has a few implications that I see being ridiculous but it's been proven by companies and research groups.

My question is , are there structures that can sustain the heat, the impact and the stress of the detonation when you scale the technology up to the size of a rocket engine(?). It also does not have limiting form factors as I've seen varied inlet and tube shapes being used. Do the corners of the chamber not have concentrating stresses? I have started reading research papers, but any more inputs on how to go about seeing the feasibility would be helpful.

It is indeed possible, and at least one craft powered by pulse detonation engines have been successfully flown.

A big problem of pulse detonation engines for aircraft use is the infernal noise - if you think pulsejets are loud, think what replacing high-frequency deflagrations with high-frequency detonations will do. But the idea is sound (no pun intended), as detonation can allow for high exhaust velocity, which you want for space engines, while still having the kick that chemical engines give, that you also want to escape a gravity well or cross a Van Allen belt as fast as possible.

As I detail in this answer, most research today seems to concentrate on a similar concept, Rotating Wave Detonation engines, where detonation fronts keep circling a ring-shaped chamber instead of a tube with cycling detonation-evacuation. It uses the same principle, but is more efficient as you don't have to wait for the detonation products to evacuate, nor some of those mix with the reactants for the next detonation. In addition, you can control how many fronts there are at a given instant by injecting more or less reactants, which can give you some vector control by injecting more on one side of the ring than the other. Continuous detonations seem to be less hard on the engine than pulse detonations, so wear and tear is probably better, though heat is still a big problem. Also it seems to be less deafeningly loud.

And to digress from pure space exploration, if for some reason noise isn't a problem, again, pulse detonation engines have the potential to be rather simple once the design is fine-tuned. So if you want planes in the next Mad Max film, it could make sense. In fact, for a rag-tag air force, noise may even be a feature. Today's planes sometimes use supersonic flyby of enemy infantry as close air support, after all.

Pulsed propulsion is certainly possible, but there are a bunch of engineering issues that mean such a design would never be more efficient than a comparable constant-flow chemical rocket. For nuclear propulsion, the engineering challenges are somewhat different.

There are numerous problems with pulsed chemical propulsion.

A constant flow engine is providing a (more or less) constant amount of acceleration. Engineering the rocket to sustain the stresses of, say, 3-4 Gs of sustained acceleration is much easier than finding a design that will survive 20 Gs of intermittent acceleration. You can put dampers and shock absorbers onto the end of the rocket, but that is additional weight. All the components that receive the full brunt of the shock must be strengthened accordingly, and will therefore also contribute extra mass to the craft.

As you know, rockets go forward by producing high-velocity combustion products and channeling them all to go backwards. A constant flow engine is very good at doing this - from the combustion chamber to the throat to the nozzle, the flow becomes supersonic and is channeled in almost completely the same direction.

With pulsed projection, the explosion has to happen outside of the chamber. Only the fraction of the explosion that hits the shock plate contributes to the forward thrust of the craft. The rest gets lost sideways and backwards. This problem could be mitigated somewhat by using appropriately shaped charges, but you will still get quite a lot of inefficiency. 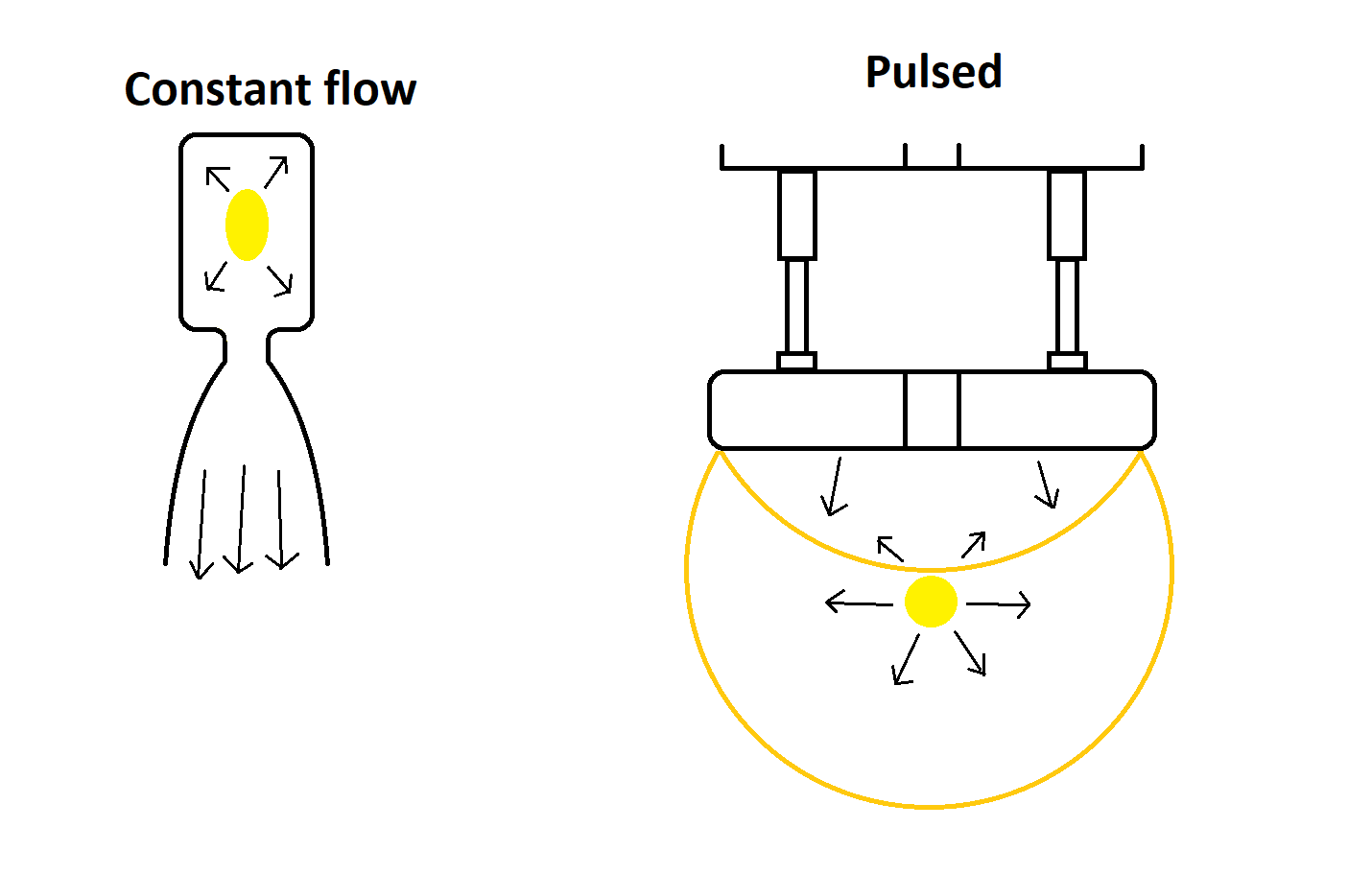 This one I consider relatively minor, but relying on a supersonic detonation rather than deflagration limits the choice of propellant. This may be surprising, but explosives like HMX or TNT have a much lower energy capacity than kerosene/LOX, and therefore a lower max Specific Impulse. Kerosene/LOX just happens to combust slower than those explosives and cannot create a supersonic shockwave. I don't know for sure if a supersonic shockwave is required for pulsed propulsion or whether such a system is feasible for propulsion in vaccuum.

So why do designs exist for pulsed nuclear propulsion? After all, any design would still suffer from the same problems as with chemical propulsion.

The answer is that sustaining a constant-flow nuclear reaction is much harder than repeatedly detonating nuclear bombs. Nukes benefit greatly from economies of scale, and so a few larger bombs would be much more efficient than the same mass worth of smaller bombs. Proposals exist for such constant-flow nuclear propulsion involving enriched uranium salts dissolved in water (See Zubrin's Salt water rocket), but the engineering difficulties involved would be immense. Sustaining a nuclear reaction (which is inherently unstable, easily fizzing out or running away with even small variations in neutron flux) in a medium involving turbulent flows of water, would be...difficult.

A nuclear pulsed-propulsion vehicle would be comparatively much easier to design and build than a nuclear salt water rocket, yet would suffer from the same inefficiencies as chemical pulsed propulsion. Theoretical calculations for Salt Water rockets generally give Isp's much higher than those for Project Orion-style spacecraft.

Not the answer you're looking for? Browse other questions tagged engine-design feasibility or ask your own question.

9
Multiple engines vs one engine with multiple combustion chambers
18
Are Armageddon's simultaneous shuttle launches feasible?
4
Detonation Liquid rocket engine
2
Why did the S5.2/9D21 rocket engine engine have pyrocharges?
12
How feasible is the Delta-Glider?
1
What impacts do the rocket engine cycles have on the sizing of the components and effectively the engine?
1
Is the RD0146 an open or closed cycle engine?