What spacecraft control is Margaret Hamilton pressing in this picture?

Margaret Hamilton was the Apollo Director of Software Engineering. In this picture, she is shown inside a mock-up of the Apollo command module. 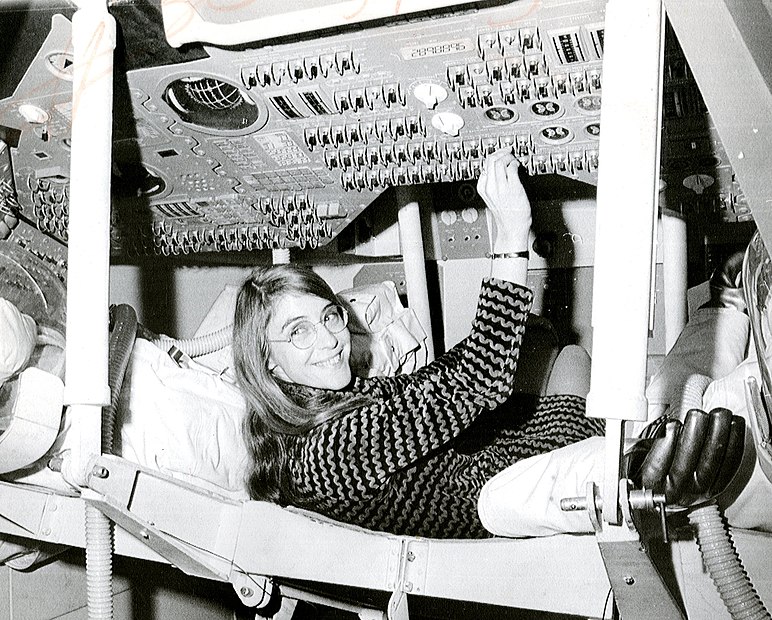 Hamilton is noted for many accomplishments during the Apollo program. She led the team that wrote all of the software for the guidance computers, invented the term "sofware engineering", and insisted on unit and integration tests of all software. Her work was critical to solving computer problems during Apollo 8 and Apollo 11. In 2016, Hamilton was awarded the Presidential Medal of Freedom (the highest U.S. civilian honor) for her contributions to the Apollo program and software engineering.

She also personally wrote many of the routines for the DSKY display and keypad unit, seen above her head in the picture. It is therefore odd that she had posed with her hand on an unrelated control (apparently a toggle switch or a circuit breaker), instead of the DSKY.

Can anyone identify the control that her hand is on in this picture?

Having given many tours of the cockpit in the shuttle simulators, it's very common to have someone say "Turn around for the camera and put your finger on a switch!"

Organic Marble beat me to it, but in the interest of teaching people to fish:

There's a handy panel locator figure which subdivides the command module control panel into several lettered areas as well as a grid reference. This switch is in area "P", grid J-34 on panel 2.

Looking up that location in the table near the start of the controls and displays section of the Apollo operations handbook identifies it as the "ECS RADIATORS-HEATER - PRIM 1/CENTER/PRIM 2" switch.

This is part of the spacecraft's environmental controls.

Not the answer you're looking for? Browse other questions tagged apollo-program identify-this-object or ask your own question.

8
How was temperature and humidity maintained inside the Apollo mission capsules?

6
What is this spinning object seen on a spacecraft above the ISS?
0
What ESA video contains this “family portrait” of comet-visiting spacecraft?
1
At what time in the Apollo 14 mission did the maneuver shown in this image happen, and what exactly was happening?
3
What spacecraft part is Mike Pence touching in this photo?
9
Apollo Mission Operations Control Room 2 display, what do these numbers indicate?
9
What is this spacecraft tethered to another spacecraft in LEO (vintage)
3
What kind of camera was used to produce this Apollo-era footage of the Earth?
10
What antenna is this in an Apollo 15 LM photo?
5
What is the reason behind the chromatic aberration on this DISCOVR picture?
11
What is the backstory of this silly picture of the Apollo 1 crew?