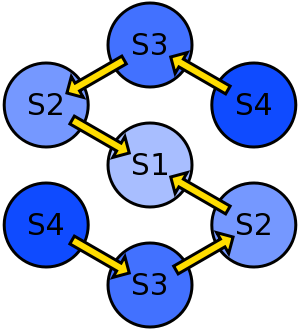 Asparagus staging is possible, but not viable.

Mainly because pumping fuel around at the speeds and volumes needed for launch is a really big job, but also partially because the actual tank dry mass we achieve is so much better than KSP does, that the benefit is much reduced.
KSP tanks are about 10% dry mass(tanks only, no extras), thus ropping them provides very solid gains for your rocket. The Falcon 9 first stage with engines, avionics, gridfins and legs still manages dry mass of only 6.5%. For bare naked tanks the dry fraction will be much less, possibly even under 2%.

The proportional gain from dropping just a tank would be....minor. Not worth it, compared to the mass, intricacy, power needs and introduced failure modes that come with pumping several tons per second of cryogenic liquids around.

Nor, apparently, is even the somewhat more benign "onion" staging viable.
The closest we've ever had to this was the Space Shuttle's external tank, which was sort-of a single-tank onion system, except that the orbiter did not carry any fuel for the SSME's onboard, so it's more of just an external tank not even a drop tank.
SpaceX did take a serious look at implementing crossfeed on their Falcon9Heavy, this would have been a basic onion staging system, but have decided that the problem is either undoable or more likely just not worth doing.

What is worth doing is the sort of thing that the Delta IV Heavy, and the Falcon9Heavy do: Run the launch with full throttle on the side boosters, and reduced throttle on the core booster. This allows the rocket to stage off the side boosters on depletion, while still having some fuel available on the core booster. This is a compromise solution that provides some of the benefit of crossfeed, but completely sidesteps the added complexity and risk of the plumbing needed.

22
How was fuel crossfeed achieved, between the main tank and the Shuttle?
6
Ballpark comparison of a hypothetical Falcon 'Quad' Heavy with cross feeds
2
Break Away Valves for Launch
1
How much more hardware is needed in a cross-fed CBC rocket than a non-cross-fed one?

8
Why do rockets separate from both its strap-on booster cores simultaneously instead of one at a time? (Delta IV Heavy, Falcon Heavy, Angara)
10
A cryo tank within another cryo tank...is it a sound engineering concept?
26
What is the legal status of waste rocket parts ending up in the ocean?
22
How was fuel crossfeed achieved, between the main tank and the Shuttle?
1
How can I obtain the necessary thrusts / mass flow rates to achieve a given burnout velocity for an optimally staged rocket?
15
Why not keep the engine for multi-stage rockets?
7
Why can’t cryogenic propellants be storable, at least on the ground, via refrigeration?
4
Is the space shuttle the only launcher that jettisson tank without any engines in its staging process?
14
Why is the Space Shuttle's External Tank fuelled through the Orbiter's main engine plumbing system?