On December 28, 2013 two Russian SKRL-756 calibration sphere satellites will be launched during the maiden flight of the Soyuz-2.1v, a brand new lightweight derivative of the Soyuz launch vehicle, using Volga upper stage. I wasn't able to find much information on them, but based on a few short descriptions I presume they're passive hollow metallic (likely aluminum) calibration targets, and spheric shape should assure constant radar signature. 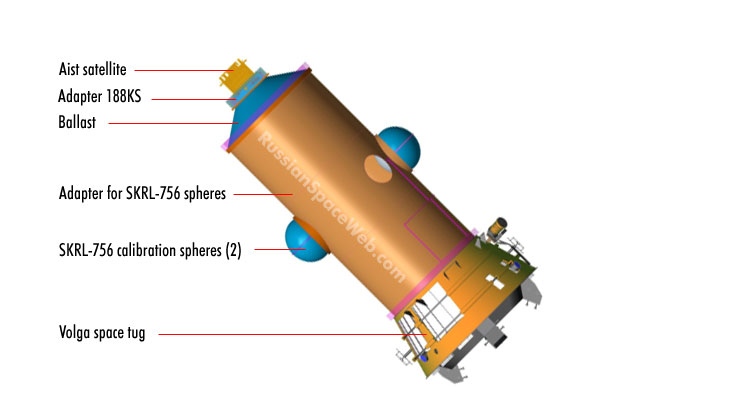 Above: The payload configuration in the first mission of the Soyuz-2-1v rocket. Credit: TsSKB Progress

During its first test launch, the Soyuz-2-1v rocket with the Volga third stage carried an experimental version of the 50-kilogram Aist satellite and a pair of SKRL-756 radar-calibration spheres for the Ministry of Defense. All three payloads were to be released from a special adapter mounted on the Volga upper stage after it enters a near-polar orbit.

How do these radar calibration spheres look like, what is the material they're made of and their diameter (radar signature), how do they function (passive / active), which radars are they supposed to help calibrate, what is the purpose of these radars and what precision are they aiming for?

If available, please also provide information on their targeted orbit (altitude, period) and how long will they serve as radar calibration targets before their orbit decays enough for them to burn in the lower atmosphere on reentry.

What are radar calibration spheres

Radar calibration requires known data to compare with the output of the radar to allow tuning of the radar such that the radar output matches the expected results. Calibration spheres are intended to have a known, constant Radar Cross Section (RCS) value when viewed from any angle, so they're most useful for calibrating RCS (though if the satellites can be tracked with a more precise tracking tool, like lasers, the same satellites could potentially be used to calibrate radar position data).

Fundamentally, the calibration satellites can be used by any radar that has the range to reach space that the satellites will fly over. Considering the inclination of the satellites is 82.42° only the poles won't get direct overflights, but with the ~600km altitude of the satellites should still be visible above the horizon at the poles. In terms of what radars would actually be capable of using satellites for calibration the radars of the Space Surveillance Network, though when you look at some of the radars that make up that network a lot of the "Contributing Sensors" are Ballistic Missile Early Warning System radars.

Between that note and the fact that RCS is used to characterize objects (if you confidently know how big an object is in terms of its radar reflection you can make a guess at what you're looking at) I'd guess that the primary reason for launching the calibration spheres is to calibrate Russian ballistic missile early warning radars (though if the expected RCS of the spheres was published anyone else could use them for calibration too) so they're best able to determine what they're tracking based on the RCS detected. I know basically nothing about Russian ground-based radars so I can't speculate on specific sensors or target precision.

This page tags the calibration spheres as having NORAD identifiers 39490 and 39491. The current (July 2015) orbital parameters you asked for (follow the links for full TLE/kepler elements/state vector) are:

This NASA page claims that "Debris left in orbits below 370 miles (600 km) normally fall back to Earth within several years." though going back to a much earlier (December 31, 2013) element set for SKRL 756 B indicates an altitude of 592.0 - 622.5 km orbit. In a year and a half we've seen measurable but minor decay, but that will speed up as the perigee drops lower and encounters more atmosphere. I don't have the tools to really calculate a timeline for decay but I'd estimate it will be more than several years but probably not more than a few decades.

To answer the comment: "is aluminum or another material used?"

Again, I don't have details for SKRL, but I do have reference material for LCS (Lincoln Calibration Sphere):

Not the answer you're looking for? Browse other questions tagged communication low-earth-orbit soyuz-spacecraft radar or ask your own question.

6
How does a three-way doppler shift measurement work?
10
How does the SpaceBEEs' experimental passive radar reflector work?
13
Detailed radar imaging of Tiangong-1; how do they do that?
4
How does Deep Space Network's DSS-14 transmit radar and receive it at (almost) the same time? (monostatic radar)
6
How (the heck) was coherent synthetic aperture radar (SAR) implemented using photographic emulsion aboard Apollo 17?
7
How much does smallsat launch to LEO cost?
0
Does transmitting from a few dishes significantly improve the performance of radar surveillance from Earth at GEO and beyond? If so, how exactly?