Curiosity: Why did they “reinvent the wheel” instead of using pressure tires?

Curiosity rover's wheels seem a bit tired and show signs of wear and tear, as reported for example in this Discovery News article from May 22, 2013. This damage only increased since then and wheels now show large holes. It doesn't look pretty, and since picture tells a thousand words, here's a photograph showing difference in wear and tear between Sol 34 and Sol 488 (Solar days on Mars since the start of the mission) so you can appreciate the extent of the damage for yourself: 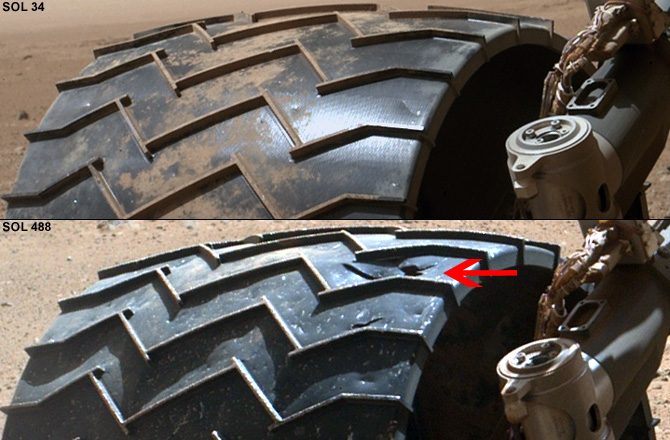 This of course got me curious, if wear and tear on aluminum wheel skin is so extensive in under a year and a half (Earth years), why didn't NASA simply use classical car pressure tires? Mars has some atmosphere, so the rover could have a compressor onboard to help control tire pressure at all times, despite Martian days and nights having much larger temperature difference than what we're used to having here on Earth. And some tire designs are good for years in atmosphere with oxygen and used on heavy-duty industrial machinery here on Earth.

So, while admittedly not too knowledgeable on tire technology, I still believe it would be feasible to simply use more conventional technology that has some 100 years of evolution and we trust every day to get us from point A to point B, and perhaps extend it with whatever support technology would be needed to keep them in good health, like a few tire pressure sensors, a compressor with 6 outputs one for each tire and so on. It is possible in automobile industry with current tech to have such automatic tire pressure monitoring and inflation/deflation system (know as Self-inflating Tires, or more technically correct - Central Tire Inflation System or CTIS) work on the go, and use threaded kevlar for outer skin or maybe some other synthetic materials instead of rubber for tire skin and inner tube, so...

What was the reason that NASA decided that Curiosity needs non-conventional, solid metallic tires / tire skin? And, given current rate of wear and tear, how long is the rover estimated to be able to continue driving around? Could this threaten rover's planned longevity?

Update: Damage to the wheels is now apparently much larger than what I initially found through related news articles good 100 Martian days ago. Here's the latest photograph of the left-front wheel of NASA's Curiosity Mars rover showing dents and holes on Sol 490, not even a day old as of the time of this update (red circle around the largest hole is my own addition): 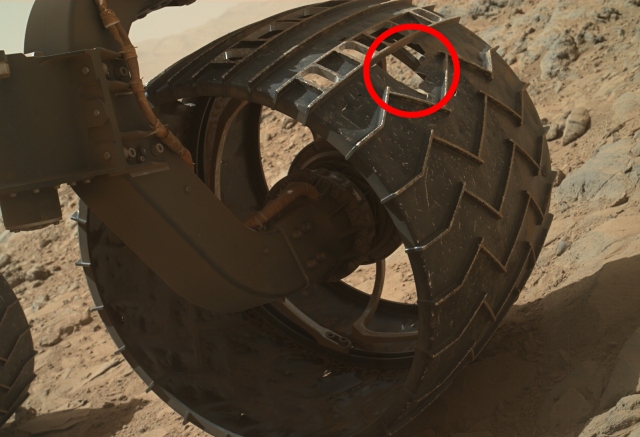 NASA's Mars rover Curiosity acquired this image using its Mars Hand Lens Imager (MAHLI), located on the turret at the end of the rover's robotic arm, on December 22, 2013, Sol 490 of the Mars Science Laboratory Mission, at 13:46:19 UTC.

Looks like Curiosity isn't making the ·--- ·--· ·-·· (JPL) signature Morse code pattern tracks any longer with its wheels in the sand as it navigates the Martian surface. That's a pretty large additional gap there, on top of its designed traction pattern: 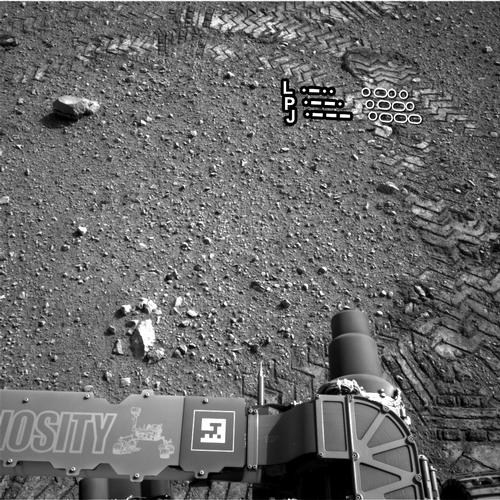 The straight lines in Curiosity's zigzag track marks are Morse code for JPL, which is short for NASA's Jet Propulsion Laboratory in Pasadena, Calif., where the rover was built and the mission is managed. The "footprint" is more than an homage to the rover's builders, however. It is an important reference mark that the rover can use to drive more precisely via a system called visual odometry.

I wonder what is Curiosity scribbling now on the Martian surface. I hope it's nothing offensive! :)

Mars' temperature range is rather large, with temperatures down to -107 °C measured by the Viking landers. This is below rubber's glass transition temperature of -70 °C, below which rubber becomes brittle. So you can't use rubber.
A rubber tire is heavy. The tread of a normal road tire is more than 1 cm thick, off-road tires are thicker and heavier. It also needs a rim, adding more weight. A wheel that only consists of a rim (roughly speaking) is much lighter.

The wheels had to be as light as possible. So adding a rubber tire (inflatable or not) simply wasn't an option.

There were several factors that drove them to design the wheels to be as lightweight as possible. The large size of the wheels means that very slight design changes add a substantial amount of mass. Increasing wheel thickness by one millimeter would add 10 kilograms to the rover's total mass. But total system mass wasn't the only constraint. Erickson explained that a major constraint arose from a tricky moment in the landing sequence, at the moment that the wheels deployed, while the rover was suspended from the bridle underneath the descent stage. The wheels' sudden drop imparted substantial forces on the mobility system, and keeping wheel mass as light as possible reduced those forces to manageable ones. There were other factors that made it important to keep wheel mass low.

So the wheels needed to be as light as possible while still being able to do their job, but as to their job: "We misunderstood what Mars was," Erickson said. "Strongly cemented ventifacts are not something that we saw on Mars before." They designed Curiosity to handle all the challenges that Spirit and Opportunity had experienced, especially sand, which Curiosity traverses substantially better than her predecessors. "This vehicle is able to get itself out of situations that MER couldn't; it's got more flotation than MER had by a substantial margin." They designed Curiosity to handle the sand traps, flat bedrock, and rocks-perched-on-sand landscapes seen by all the previous landers. They just didn't imagine the possibility of the peculiar and never-before-seen terrain type that they found in Gale crater. "There are [places] on Earth that do have these sharp ventifacts, but we hadn't seen them on Mars and we didn't test against them," Erickson said.

Punctures are a liability when you can't change the tire. A punctured tire soon disintegrates, and you end up dragging a mess of rubber and steel along, potentially jamming the wheel or ending up underneath the next wheel in line.
Self-healing tires are available. But like puncture repair kits, these rely on having a viscous substance inside the tire that can seal a small hole. Again, Mars' temperature range makes this difficult to apply (the sealant must stay viscous at -100 °C). And no sealant will be able to close a gash as large as the one shown in the photo.

Curiosity's wheel design is based on the earlier Mars rovers, which were studied in detail (wheel abrasion experiment on Sojourner). Some deformation, denting and rupture was expected and designed for (entire presentation on MSL design here).
Photos of a prototype on Earth being put through its paces, dents and holes in the wheels clearly visible. MSL team response to photos:

There was some concern about tears in the rover wheels, but today we got the go-ahead to drive, with no restrictions on distance or drive mode. The tears in the wheels were expected based on testing, and the wheels are designed to survive such damage without affecting mobility.

So, changing the design to rubber or other pliable materials wasn't necessary.

Emily Lakdawalla of the Planetary Society has an extensive blog post with more details on wheel wear, its causes, mitigation strategies and projected lifetime.

At the end, I asked Erickson to put the wheel problem into context with his experience on many other missions. He said that the problem of damage to Curiosity's wheels has definitely had a significant impact on the mission, and mentioned for comparison the wheel failure on Spirit, when they had to start dragging the right front wheel behind them and drive exclusively backwards. But the Curiosity problem is not as bad as Spirit's because Curiosity is no less mobile than it was before. They can choose to accept wheel damage if they determine the scientific value to be worth it. So while Spirit's mobility problems limited the scope of what the rover could do, Curiosity's mobility problems do not -- at least, not directly. The biggest effect of the wheel damage problem is to slow the mission down. And that's what will limit how much Curiosity accomplishes. By not traveling as fast, and by having to limit their path choices, the amount of exploration that they can do is necessarily less than if they could go gallivanting across the bedrock outcrops at will.

Update: in June 2016, the wheels were imaged again, showing only a slight increase in damage compared to last year.

There is no way that an inflatable tyre of any kind can be used for remote missions, because they are incredibly unreliable. Think about car or bike tyres here on Earth, where we have a fairly small range of temperatures. They puncture easily, they burst, they lose pressure, the rubber degrades etc. When they have a puncture, fixing them is complex - we can't automate it on this planet, let alone sort out puncture repairs on another world with greater temperature extremes.

Tyres are heavy. A thin aluminium shell wheel, or even grid wheel is light. And mass is all important when it comes to delta-v.

Curiosity is only expected to run for 2 years. So far it has successfully survived and carried out useful scientific study. I think these wheels have performed extremely well.

I think rubber tyres are a no go, adding additional complexity (that can fail) is too risky. Metal is definitely the way to go. I do however think firstly the type of metal used was a very bad idea as it is inherently soft, though light (which is why they chose aluminium) they should have gone with titanium, yes, a bit more weight (not much) but almost indestructible.

Secondly, they should have given greater thought to the thread pattern, the one they went with is not great at shifting soft sand to the side and out. They really could have done a lot better than they did. If curiosity fails, and I hope it does not, it will probably be because of the design flaws on the wheels.

Not the answer you're looking for? Browse other questions tagged mars nasa rovers curiosity technology or ask your own question.

25
Why hasn't NASA planted a stationary lab on Mars yet?
18
Why are Curiosity's wheels aluminum rather than titanium?
10
Curiosity wheel damage
8
Could aluminum undergo a thermite reaction with Martian dust?
6
How long might the Curiosity Mars rover last, and what would be the most likely cause to end its mission capability?

31
Who took the Curiosity rover's self-portrait photo from the surface of Mars?
10
Curiosity wheel damage
20
Curiosity is still dirty! How will the ExoMARS Rover keep its solar panels dust-free and collecting sufficient power?
9
Are these experimental stoichiometric NiTi wire mesh wheels made from “memory alloy”? Need to run at certain temperature?
1
How many times has Curiosity switched between its two redundant computers? (“brain switch”)
4
Have any systems on any Mars rovers failed (even partially) as a result of a dust storm? (besides loss of solar power)
13
Has Curiosity started driving backwards yet?
5
Why doesn't the Perseverance rover have markers on its wheels like Curiosity?
27
Why did the engineers at NASA's JPL put a Morse code on the wheels of Curiosity?