Can astronauts on an EVA communicate directly with ground stations?

Can astronauts/cosmonauts performing spacewalks at the International Space Station communicate directly with radio stations on the ground (even if only as a back-up)? Or do they need to relay their signals through the ISS?

Can astronauts on an EVA communicate directly with ground stations?

I don't see why not, unless it breaks some laws. With a simple vertical whip antenna or small Yagi and 10 W transmitter, you could do this with a portable UHF transceiver.

These distances are specifications so the capabilities under extraordinary situations will be different.

It goes on to explain that the antenna is "omnidirectional" but I doubt it has a perfectly spherical radiation pattern. Nonetheless let's assume it transmits its power in $4 \pi$ Sr. The astronaut may have to orient themselves closer to head-nadir than feet-nadir to get line of sight from the top of the backpack to the ground, and that orientation may change during the pass. 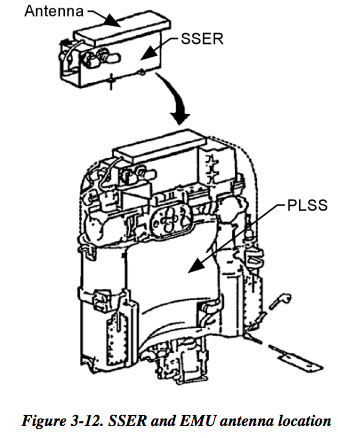 The EMU antenna is a low profile, omnidirectional UHF antenna mounted on top of the SSER with Velcro (Figure 3-12). Its internal construction is a single hollow section that acts as a resonating cavity for radio signals in the frequency range of those used by SSCS.

I used $\sim \left( \frac{\pi d}{\lambda} \right)^2$ from here to get the receive antenna gain for uplink. This won't be a problem because we can assume that the transmitter on the ground is a hundred times (or more) more powerful than the suit transmitter.

This is consistent with Suitsat and Kedr stories, amateur radio operators should be able to pick these up. Amateur radio satellites are in this power ballpark and are also routinely received by simple systems. You may need a motor to track the motion if you use a directional antenna. As mentioned above, uplink would be no problem since you can use hundreds of watts compared to the 100 mW transmit power of the suit.

†Of course a vertical antenna has a null overhead, so if the ISS passes directly overhead you should tilt it a bit.

Not the answer you're looking for? Browse other questions tagged iss communication eva or ask your own question.

11
How to calculate data rate of Voyager 1?
3
How to design a ground antenna for sending & receiving from a satellite?
6
Can an astronaut have a private communication during a spacewalk?
2
Juno RF power output

28
What are the procedures aboard the ISS in the eventuality of a loss of a crew member?
8
How many space-craft can a station on the DSN communicate with concurrently?
7
Do astronauts only perform spacewalks while the ISS is on the night side of the Earth?
7
How many stations could one hear with an AM/FM radio in front of the ISS' cupola window?
50
How long is the ISS out of reach of all ground stations?
2
What's the soonest after ISS arrival that an astronaut has gone on a spacewalk?
2
What GEO relay satellite will the ISS use for end-to-end optical communication with a ground station?
3
How closely can ground control monitor ISS astronauts?
5
From whence (what ground stations) do the world's major space agencies receive signals from their missions?