Did the Apollo lunar module descent stage have a role as a sort of service module?

To minimize the re-entry mass of the Apollo command module, essentially all of the mission supply of command module consumables was stored in the service module. Was there a similar arrangement between the ascent and descent stages of the lunar module? In other words, to minimize lunar liftoff mass, were the majority of lunar module crew consumables (oxygen and water) stored in the descent stage? How much reserve was carried in the ascent stage (how much endurance was available for rendezvous attempts)?

Was there a similar arrangement between the ascent and descent stages of the lunar module? In other words, to minimize lunar liftoff mass, were the majority of lunar module crew consumables (oxygen and water) stored in the descent stage?

From the specifications, we can see, for example:

In addition to the O2 capacity, the lithium-hydroxide scrubber cartridges which removed carbon dioxide from the cabin air, as we know from Apollo 13, were also a limited consumable resource in the LM. The scrubbers do not return free oxygen to the air, so oxygen consumption is still a limit.

How much reserve was carried in the ascent stage (how much endurance was available for rendezvous attempts)?

Unfortunately, I have not found a simple answer to the "what was the endurance of the ascent stage" question.

@Uwe tells me a person uses 0.35-1.1 g/min of oxygen depending on activity levels; that works out to a 16-48 hour supply of oxygen for two crew if the ascent O2 tanks are full at liftoff.

For the CO2 scrubber cartridges, we can make a rough estimate using times from Apollo 13 and Apollo 12.

On A13, the crew of three were on the LM's life support starting at around 59 hours into the mission; they had to install an incompatible cartridge from the CM using an improvised adapter at around 90 hours, so the LM carts were expended after 31 hours: about 93 crew-hours worth of LM scrubbers. For the normal 2-person LM crew that would be ~46 hours.

On A12, two crew were on the LM's life support starting at about 105 hours, and the ascent stage left the moon at about 142 hours. Subtracting 8 hours of EVA (when the crew would be on PLSS rather than on the cabin air), that works out to 29 hours, so the ascent stage should be able to provide fresh air for roughly 17 hours after liftoff - more limiting than the O2 capacity.

A scenario where the ascent stage's endurance would be severely tested is unlikely. None of the Apollo flights had any difficulty with the ascent and rendezvous portion of the mission. If the ascent stage didn't reach a safe orbit, it would crash to the surface of the moon within 10 minutes. Once safely in orbit, either the CSM or the ascent stage could perform the rendezvous maneuvers: 100% redundancy of what were already, individually, reliable spacecraft. Even if the CSM and ascent stage couldn't hard-dock, the last resort would be to EVA back to the CSM cabin.

The service module and descent stage did share the same design philosophy that any mass not needed to safely return the crew and scientific results would be left behind. However, there are both similarities and differences between the two modules.

Update: The OP clarified the question for reserve oxygen (see section below). This section was my answer for reserve propellant.

As far as reserve propellant, the best information that I've found is the level for the "fuel warning" light:

I am skeptical that the service module and descent stage had comparable levels of reserve fuel/oxidizer. The sizes of the tanks were already established well before the unmanned Apollo test flights. However, the amount of propellants actually used depend on the vehicle masses (which were changing throughout the Apollo program) and the flight parameters (which varied between flights). So the amount of propellants left over will vary a lot, and it's doubtful that they would be comparable between these two modules.

It's like asking how much "reserve" is in your car's gas tank. The tank has a fixed capacity, and the amount you actually use can vary trip to trip.

The missions did carry extra oxygen. Like propellants, the tanks were designed for a certain capacity, and the actual use varied from mission to mission. Here is the CSM usage for Apollo 15: 58.4% of the oxygen was planned to be used, and 59.0% was actually consumed. 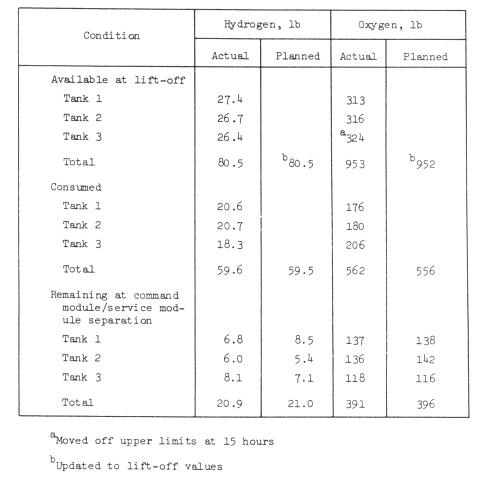 and the lunar module usage for Apollo 15: 47.5% of the descent stage oxygen was planned for use, and 55.7% was actually consumed. 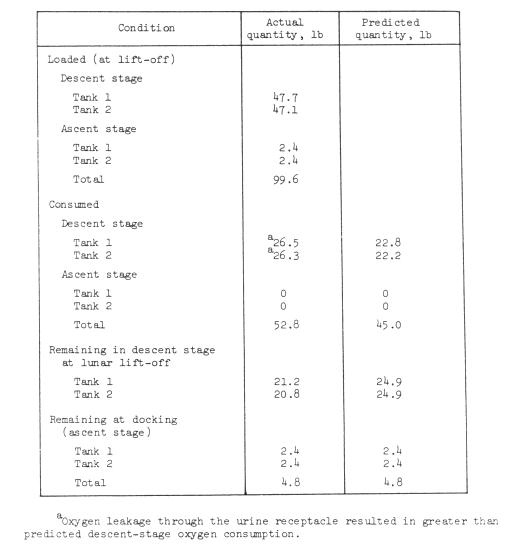 There were tanks for fuel, oxidator, water, helium (for pressurization) and oxygen in both the ascent and descent stage. 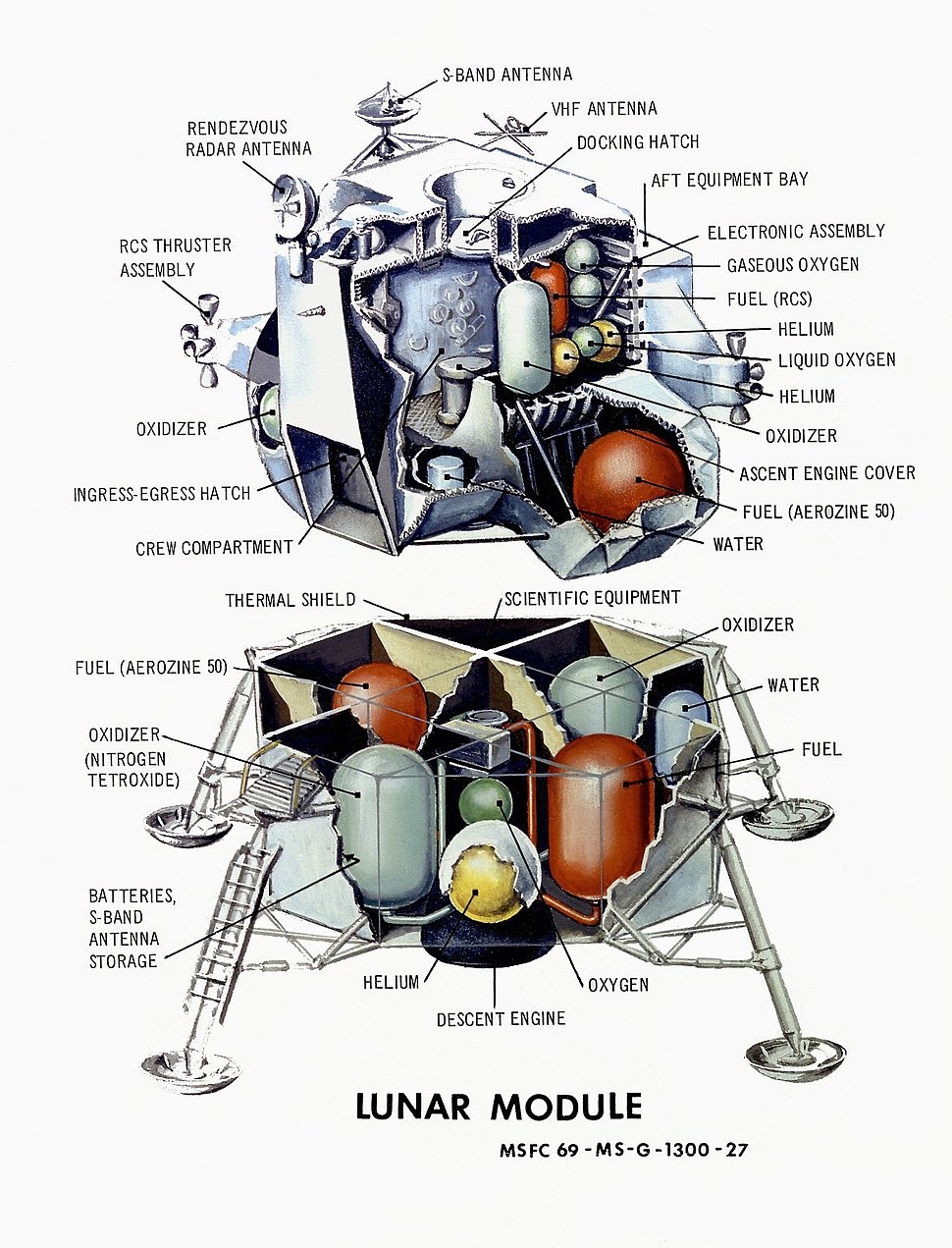 24
Was it really necessary for the Lunar Module to have 2 stages?
20
What happened to Apollo 13 LM descent stage?
6
Could an Apollo Lunar Module have landed and returned without Earth assistance?
2
Lunar lander reaching orbital velocity to dock with the orbiter for return to earth

20
Why choose to crash the Apollo lunar lander ascent stage after it ascended?
36
How did the Apollo 11's Eagle ascent stage find the CSM after leaving the Moon?
4
What was the Apollo service module propellant used for on the LEO missions?
12
What did Apollo need the crewed Command Module for?
8
Could the Apollo LM abort mode be engaged after touchdown? What would have happened if it was?
19
What was the reason to use different fuel for the Apollo Service Module propulsion system and reaction control system?
5
Was the lunar module computer in the ascent stage or the descent stage?
13
Why did Apollo have a crew of 3?
7
Which Apollo-era contractors are still building aerospace components today?
4
Did any Apollo missions have enough fuel left to bring back the LM ascent stage?