I've noticed this discoloration / stains / burn marks along the edges of the Quest Joint Airlock thermal cover on the hatch before, but they seem even more pronounced and contrasting with the cover's natural color now, during the last US EVA-24 of the Expedition 38 crew (Rick Mastracchio as EV1, Mike Hopkins as EV2, and Koichi Wakata as Canadarm2 operator and support inside the station). For example, this is one of photographs taken during EVA 24 as the two spacewalkers egress: 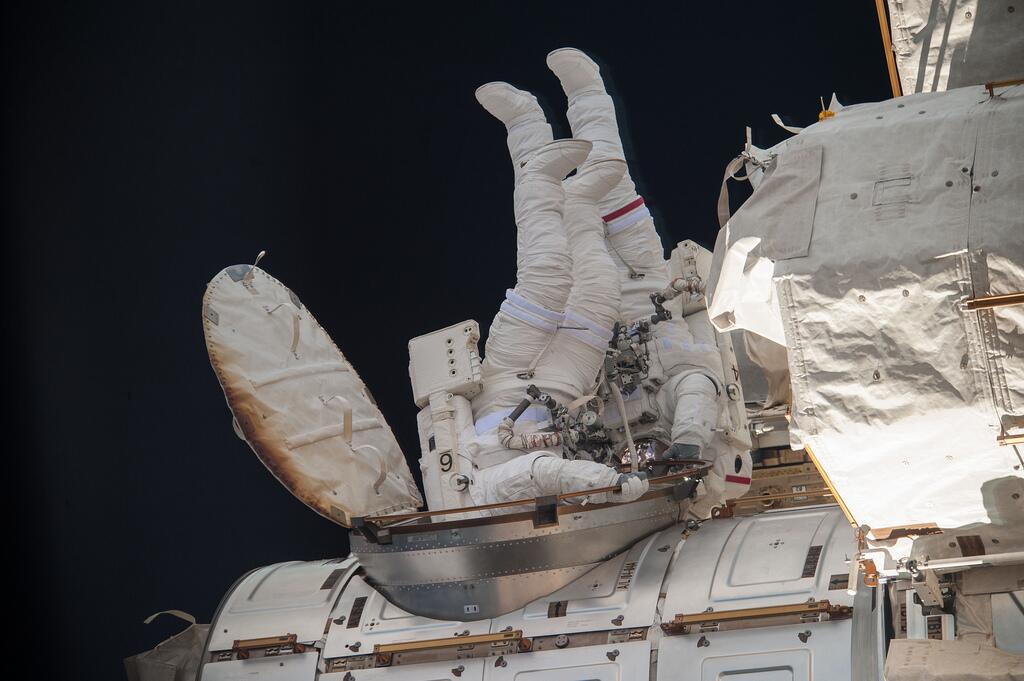 The thermal cover is visibly discolored along its edge, gradually pronounced towards the outermost edge. I'm not sure if this is some sort of oxidation, chemical burn of thermal insulation materials as the airlock gases escape, discoloration of some materials due to exposure to the Sun as it remains open during the EVAs, or something else? 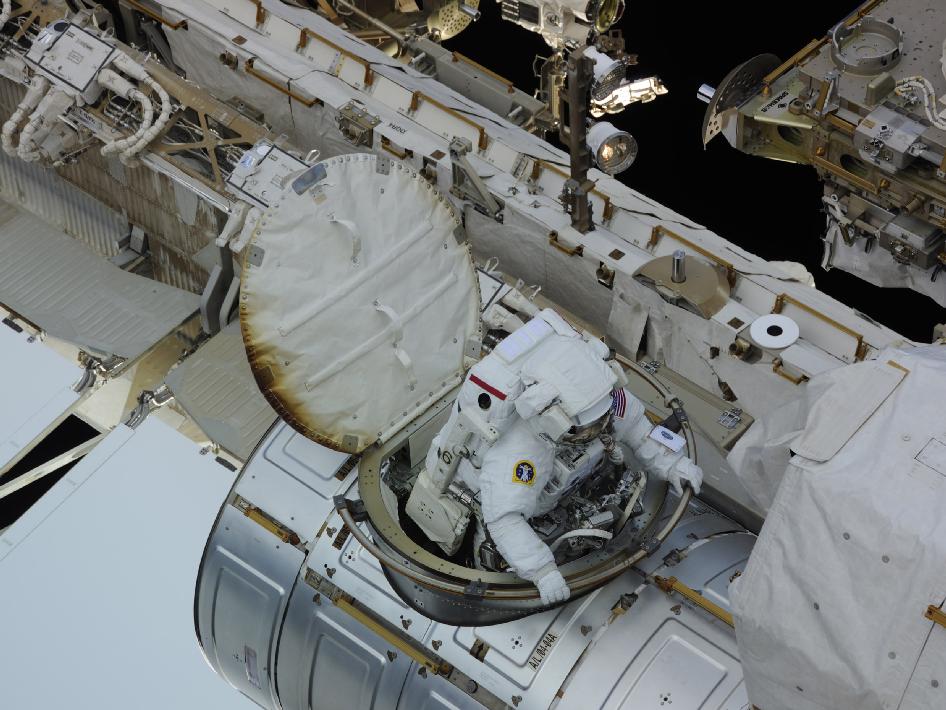 Reflecting on his experience as he emerged from the craft into the daylight on the Expedition 24 mission's second spacewalk, astronaut Doug Wheelock said "the colors of the Earth just explode at you as you exit toward the planet. Notice what looks like scorch marks on the hatch thermal cover, the effect of vacuum and atomic oxygen on the threads and thread sealant used on the thermal cover. The 'smell' of space follows suit, I’ve heard it described like burnt cake or cookies, or like the smell of an extinguished match."

Emphasis is mine. So this is indeed due to oxidation of the sealant materials used on the thermal cover, caused by monatomic oxygen coming from the tenuous atmosphere at ISS orbital altitude that the hatch is exposed to when it remains open during Extravehicular Activity (EVA), some of them over 7 hours long, and also when closed along its edge where the seal isn't hermetically tight with the rim of the airlock. At ISS orbital altitude between 330 km and 435 km (205 - 270 mi), 90% of atmosphere is monatomic oxygen due to solar UV radiation breaking bivalent molecular bonds of diatomic oxygen:

The more pronounced oxidation is on the Space Station's ram-facing side of the thermal cover, where interaction with the atmosphere is the greatest. Kudos to Mark Adler for this explanation!

Not the answer you're looking for? Browse other questions tagged iss materials eva thermal quest-joint-airlock or ask your own question.

34
How do ISS astronauts "get their stripes"?
13
Would unpainted iron or steel rust in space?

7
What is the airlock on Rassvet meant for?
8
Why did NASA assess 3 separate and over 6 hours long EVAs are needed to replace a single failed Pump Module (S1 PM)?
1
What thermal effect does the Sun have on spacecraft that are roughly the same distance from the sun as the earth is?
3
What kind of thermal protection system does the Dream Chaser have?
11
What are the two orange tabs stuck on opposite edges of each window of the ISS cupola?
2
How Is The Quest Joint Airlock Operated?
34
How do ISS astronauts "get their stripes"?
7
What happened during this shuttle simulation malfunction involving a failure of a shuttle arm joint while moving the JEF?