How do spacecraft navigate through the Asteroid belt to avoid collision?

Have any spacecraft been lost transitioning between Mars and Jupiter?

How do spacecraft navigate that field unscathed as well?

No spacecraft has been yet lost to the asteroid belt. In fact, we have the opposite example of missing an asteroid when it was even targeted, like was the case with MINERVA lander of the JAXA's Hayabusa deep space probe, missing the 25143 Itokawa asteroid. Why haven't we lost any spacecraft due to collision with asteroids in the asteroid belt is also pretty straightforward once you start appreciating its volume and its average particle density.

Asteroid belt is a huge area, sparsely populated with asteroids. It is incredibly difficult to estimate it's mean density considering we most certainly haven't detected all its objects, with most simply being too small to easily detect and track from up to a few astronomical units away, but we did detect most of its largest to medium size objects and that should help us guesstimate its density a bit. We already have some answers to similar questions in other threads, for example:

But for the sake of argument, let's crunch some numbers here too, and I'll take a bit different approach not to leech on work of others. 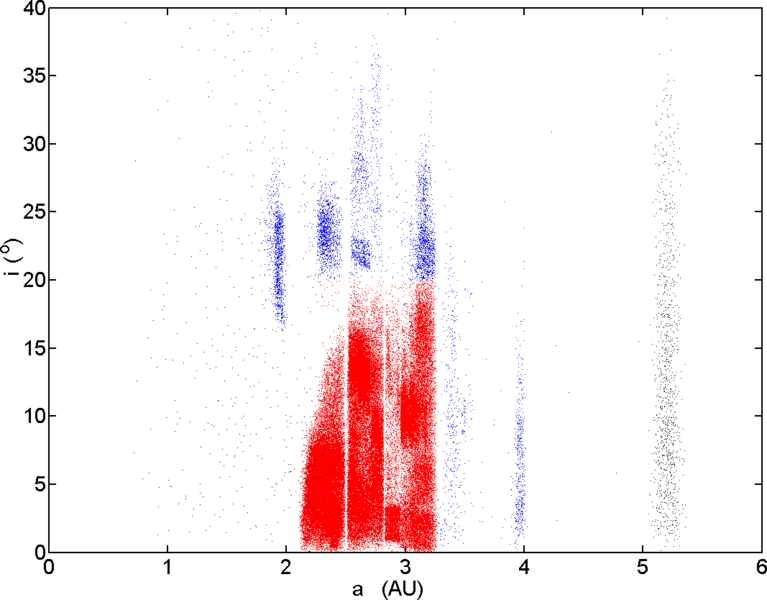 Plot of inclination $i$ vs semi-major axis $a$ for numbered asteroids inward of about $6 AU$. The main belt region is shown in red,
and contains $93.4\%$ of all the objects. For reference, Mars orbits out to $1.666 AU$, and Jupiter between $4.95-5.46 AU$.
The diagram was created by Piotr Deuar using orbit data for 120437 numbered minor planets from the Minor Planet Center orbit
database, dated 8 Feb 2006. (Source: Wikipedia)

Plugging these parameters in equation for the volume of a toroid (which is actually a leftover of subtracting the volume of the outer sphere with the inner one and then dividing it to a $8 °$ thick slice), we get the total volume of $4.56 AU^3$.

That's a much lower volume than $16 AU^3$ quoted in the similar estimate of the asteroid belt volume in an answer to a related question on Physics.SE, but keep in mind that I only accepted the area where majority of its asteroids are known to be, not its extremes. I'm doing this so we can appreciate highest risk of colliding with an asteroid in the asteroid belt, so the purpose is somewhat different. I also estimated the distance to the Sun boundaries somewhat differently, following same idea of keeping the area limited to where most asteroids would be (highest density).

OK, so now that we have this volume of highest particle density, let's try and describe it with to us a bit easier to imagine figures; Earth has a volume of $108.321 * 10^{10}\ km^3$. Given calculated volume of the main density region of the main belt:

These are just some guesstimates and I do hope I got all the decimal points correctly, but as you see, chances of colliding with an object in the asteroid belt are indeed astronomical. There is no reason to consume spacecraft's power to try and track asteroids potentially on a collision course with a passing-by spacecraft, especially since these objects aren't stationary to the vector of the spacecraft's travel and it would be incredibly difficult to detect them and infer their orbits to try and avoid them with the use of onboard thrusters.

To my knowledge, no spacecraft to date tried to create a detailed radar picture of objects in the asteroid belt ahead of the spacecraft to also try and avoid them in an extremely remote chance of being on a collision course. Navigation and collision avoidance of the spacecraft in relation to a single object on its path yes, for example the mentioned Hayabusa, and Rosetta and its lander Philae will try something similar in 2014. And some other deep space probes (I believe also Pioneer and Voyager probes) did use wide-angle radar imaging to try and detect objects in the asteroid belt for the purpose of cataloging and studying them, but to avoid collision, you'd have to establish their orbit extremely precise, otherwise you wouldn't know if you're avoiding the object, or actually helping your spacecraft to collide with it. A bit like deciding that running in the rain will get you less wet, even if you don't know its angle or frequency.

Not the answer you're looking for? Browse other questions tagged artificial-satellite asteroid navigation collision-avoidance asteroid-belt or ask your own question.

37
Why do exploration spacecraft like Voyager 1 and 2 go through the asteroid belt, and not over or below it?
21
What's the (particle) density of the asteroid belt?
13
How frequently do asteroids collide with each other?
1
What is the danger for Ceres of collision with other asteroids?