Where could we build a space elevator today (2014)?

A space elevator is an interesting concept, allowing for very low cost transit to orbit. Currently we don't seem to have a technology that will provide a strong enough cable to make the climb from Earth to Orbit.

Do we have the technology to build a space elevator anyplace in the solar system? If so where?

Carbon nanotubes might endure the enormous stress of an earth elevator but only short lengths have been manufactured so far.

A problem not often considered is throughput. An elevator car's mass adds to stress but not tensile strength, so we can't have too many elevator cars. And how fast will the elevator cars travel? They will most likely need their own power source.

We don't don't know the number of elevator cars or their speeds, but it's possible the small throughput wouldn't be sufficient to maintain the elevator, much less send humanity spaceward.

Another problem is orbital debris. At an altitude of 300 kilometers and above, the elevator would be passing through a debris cloud moving about 8 km/s w.r.t. the elevator.

There are two quasi-stable regions that hover over fixed regions on the moon's surface. Earth Moon Lagrange 1 and Earth Moon Lagrange 2 (EML1 and 2). These hover over the moon's near and far points, respectively. Elevators from EML1 or EML2 would endure much less stress than an earthly elevator -- it's possible to make this from Kevlar rather than exotic materials like carbon nanotubes.

EML1 and 2 are about 60,000 km from the moon's surface. It would have to be even longer than an earth elevator. So throughput is also an issue with a lunar elevator.

Debris density in a lunar elevator's neighborhood is much lower than in low earth orbit. So it is much less vulnerable than an earth elevator to random collisions.

Phobos has a minute gravity well and high angular velocity (a revolution each 7 hours, if memory serves). Like our moon, Phobos is tide-locked. The Mars Phobos L1 and L2 points hover about 3 kilometers over Phobos' surface. An elevator extending 10 or 20 kilometers beyond this points is sufficient to maintain tension.

A tether from Stickney Crater to Mars' upper atmosphere would be about 5600 km in length. Throughput is much less of an issue. The tether foot would be moving about 0.6 km/s w.r.t. Mars' surface. Small suborbital hops from Mars would suffice for foot rendezvous. A lander released into Mars atmosphere at 0.6 km/s would suffer much less entry, descent and landing issues than the typical Mars lander entering at 6 km/s.

Ceres and Vesta Both these asteroids have shallow gravity wells and spin a lot faster than earth. So elevators could be much shorter and endure less stress.

Here's a chart from my space elevator page: 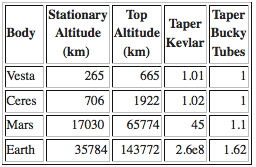 There's also the rotovator concept. It's a lot trickier to handle because it's actually in orbit rather than tethered so you have to be very careful with the energy balance to avoid pulling it out of orbit--if you launch 10 tons you also need to land 10 tons (even if that 10 tons is nothing but slag from some refinery in space.)

However, the strength requirements are lower and can also do ones that only do part of the job. (The rocket equation still makes this very valuable, though.)

Take a cable like you would for an elevator but instead of anchoring it you put it in orbit and spin it opposite it's orbital direction--the end closest to the planet is moving a lot slower than orbital velocity, the far end is moving a lot faster. On a full size one the tip will be moving at orbital velocity--in other words, stationary with respect to the planet. It could dip into the upper atmosphere (or come near the surface on an airless body) and a craft could come up to meet it. (It might actually work better if it was moving some hundreds of miles per hour so an aircraft could grab it.)

Not the answer you're looking for? Browse other questions tagged technology materials solar-system space-elevator or ask your own question.