Was there any downside of the approach trajectory of the Huygen's probe?

I found this image on the Wikipedia page for the Huygens spacecraft:

My question is, did any considerations have to be made for such an approach where the two objects have very different velocity vectors? Were any of my above statements untrue or due to a skewed scaling on the graphic?

I've checked Horizons at 1 minute intervals and the predicted trajectory (a few days before landing) shows a nearly straight-line to its landing site.

Checking the speed, it shows rapid deceleration followed by a gentler approach to the surface, consistent with the parachute.

Titan has 0.14 of Earth's gravity. All else equal that means the scale height is 7 times higher. While Earth's atmosphere increase by a factor of e (~2.7) every 8 kilometers, for a lower surface gravity like Titan's that's going to be every 50 or 60 km. So Titan's atmosphere increases in density much more slowly, and the low gravity accelerates Huygens above it's original incoming velocity much less.

A complex spacecraft could never do a straight-line passive entry into Earth's atmosphere and survive to land with known materials, but on Titan with so much total atmosphere to slow down in gradually, and so little gravity to fight, it seems this worked nicely!

As the spacecraft hit the atmosphere and started to descend, the angle dropped back down close to zero again. 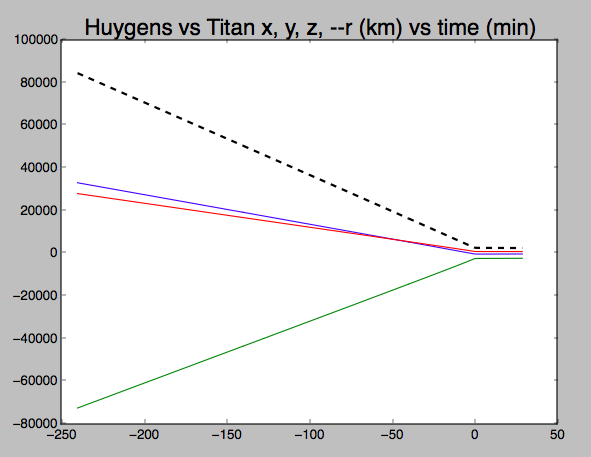 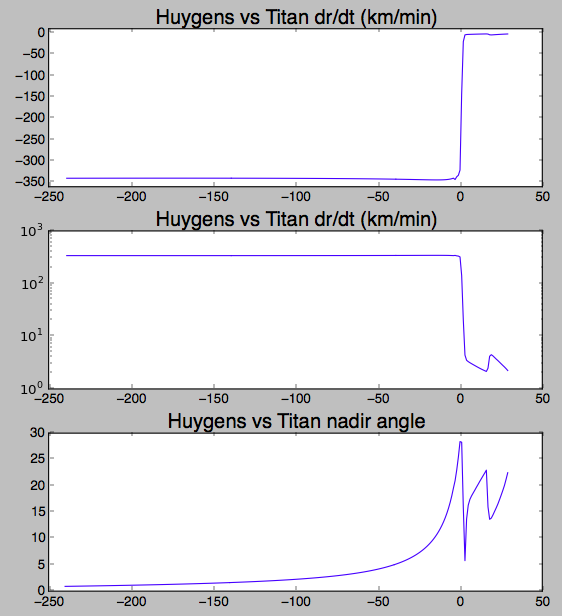 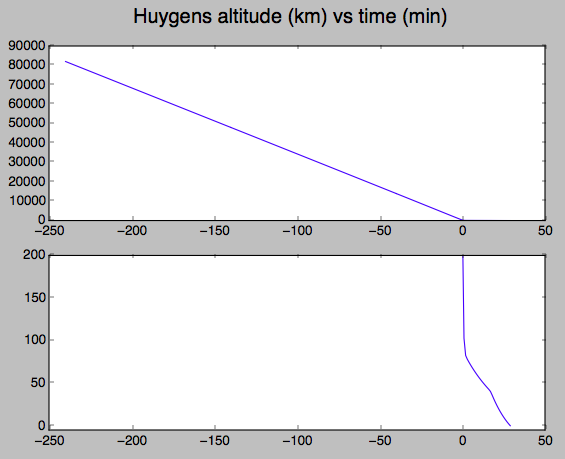 Not the answer you're looking for? Browse other questions tagged titan huygens-lander or ask your own question.

3
How to calculate the flight path angle, γ, from a state vector?

20
Why was Titan the first celestial body beyond Mars to be landed on?
5
Any proposed missions to explore the black liquid on Titan? Technical challenges?
1
Did the Huygens lander have a flood-light for photography? Was it used?
8
Can Dragonfly make it to one of Titan's Lakes?
1
Has any mission to Titan tested the idea of producing electricity from Saturn's magnetic field?