Could a ball of water stay in orbit?

Could a water bubble (spherical occlusion of water in air or vacuum) similar to the one in the picture below remain in Earth orbit without evaporating, dispersing, or disintegrating? Assume the orbit is high enough (high LEO or MEO) so that re-entry is not the limiting factor.

If a time limit is necessary for the answer, let's say we'd like it to remain stable, and ideally drinkable, for 100 years. 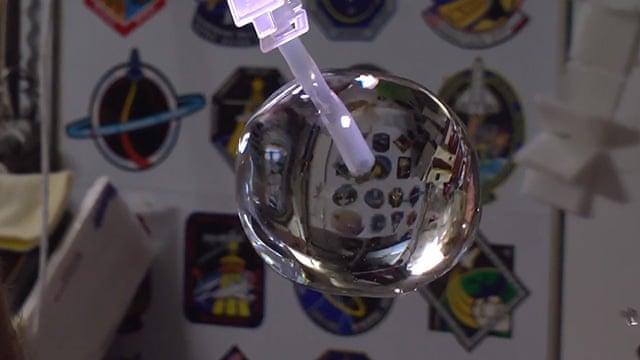 The ball of water in that picture is in orbit; it's just surrounded by (presumably) the ISS.

But a ball of water like that definitely cannot survive in the vacuum of space. Below a certain pressure, water can only be water vapor or ice. So a ball like that would immediately start to boil if it were surrounded by a vacuum. The water vapor would quickly disperse and there would be nothing there.

It would not become toxic. If it were kept in a container to keep it from evaporating, it would just be water.

A giant, moon-sized ball of water is a whole different story. Gravity would hold it together. There would be an atmosphere of water vapor above an ocean of water that extended all the way through. In the middle, the pressure would be so great that its properties would change. [Note added later: After writing this I believe I read that the pressure at the center of a Moon-sized ball of water would not be great enough to lead to one of the special kinds of ice that exist at high pressures. So its properties might not actually change.]

This is all assuming it's close enough to the sun to remain liquid. Some of the moons in the outer solar system are mostly ice, and at least Enceladus (around Saturn) and Europa (around Jupiter) have large oceans under the ice.

Not the answer you're looking for? Browse other questions tagged orbital-mechanics physics water station-keeping or ask your own question.

12
Could a Soyuz land in water?
3
Liquid water on Mars
5
Lunar Module water supply
1
How to drink water on Mars?
15
Could JWST stay at L2 "forever"?
13
What orbital mechanics toolkits available today are suitable for a real-time simulator?
6
What orbit would a space station need to stay in orbit for N years?
1
Could a horseshoe magnet help a satellite stay in orbit?
5
Water ice as dummy/filler payload to orbit