Is there an inventory of what is on the ISS?

I saw this tweet, and thought it was kind of funny. The ISS doesn't seem very big, so to find something like that seemed a little unusual to me. Mostly because it seems like there would be someone keeping track of what's on the ISS. Is that not the case? Does anyone keep an inventory? 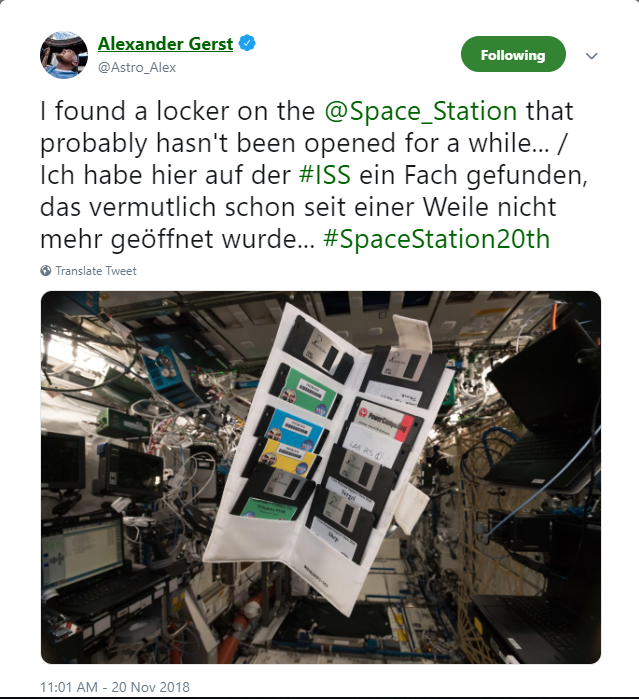 Yes, someone does keep track of ISS inventory: the Inventory Stowage Officer.

The tweet does not indicate that Gerst found something unknown. It just indicates his surprise at finding something so old.

There's a lot of stuff on the ISS. Some of it dates back to the construction phase (when the Shuttle was still in use and could ferry large loads). There are lots of spare parts and other items needed to keep the station running, including floppy disks for reinstalling software it seems.

There's no guarantee those disks are obsolete, by the way. The station may still have equipment that can read them.

7
What does the ISS Mission control center do?
4
Have “QR” or other 2D barcodes been used in spaceflight?
5
Is there a publicly available inventory of things sent to the ISS?

10
Does the ISS medical inventory include a sun-tan/sunscreen lotion/cream?
2
Is there a fax machine on the ISS ?
36
Why does there appear to be a 180-degree stereo microphone array outside the ISS?
31
Has the ISS ever not had a lifeboat?
8
Does ISS get a surplus of oxygen or water?
33
What led NASA et al. to decide the ISS should be a zero-g station when the massive negative health and quality of life impacts of zero-g were known?
8
This ISS trash deployment looks more like 2 feet than 2 inches per second, was it too fast or are these articles incorrect?