The antennas need to point towards Earth when InSight is near the edge of Mars' disk as seen from Earth so that the Doppler shift of the returned signal will be sensitive to small changes in Mars' rotation. The antennas are back-to-back so that the signals will be received and rebroadcast coherently both when moving towards Earth and away from Earth, corresponding to the East-pointing and West-pointing antenna, respectively.

This will need to be done over a period of at least two years in order to get a sufficient amount of data to detect the very tiny changes in Mars' rotation due to things like the polar caps evaporating and re-forming for example.

Considering all of this, I can't understand why it looks like the two horn antennas have been rotated slightly clockwise as viewed from above, slightly south of east, and north of west. Why exactly? 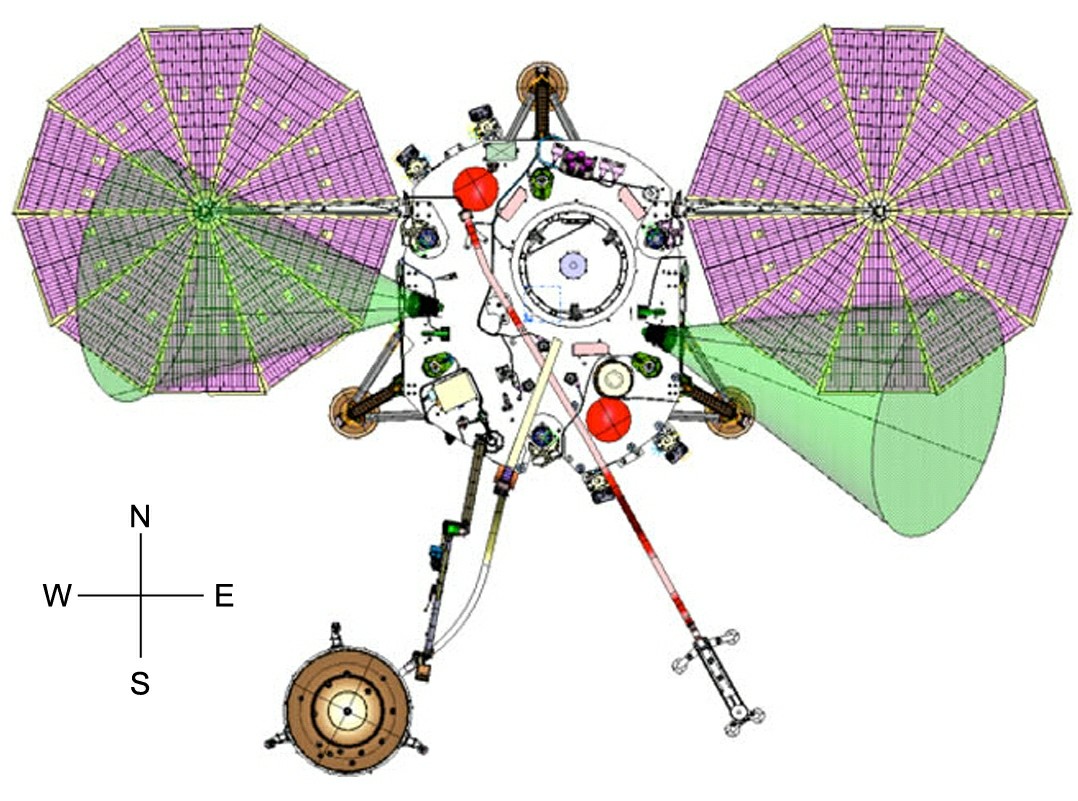 The two antennas need to point at Earth during morning and evening on Mars. They are oriented in opposite directions so that one can be used in the morning and one in the evening. The science goal requires continuous contact over several years, so all the relative orientation changes of the antennas due to the movement of Mars need to be taken into account.

Mars has an axial tilt of 25°, so that the orientation of the two antennas varies by up to 50° throughout a year. In addition to that Mars' orbit is inclined by 2°. In the extreme case (Mars is far from the ecliptic and distance to Earth is minimal) this results in a change of 6° in the direction to Earth which is 3 times closer to Mars than the Sun.

Adding these up results in a needed coverage of the antennas of 62°. (Note that this does not take into account whether the extremes are actually reached during the planned duration of the mission, but is the theoretical maximum)

Both antennas have an opening angle of 50° which is less than the required 62°, not taking into account a small additional contingency for a possible misalignment of the lander. Tilting them by 15.5° and -6°, respectively, guarantees that at least one of the antennas can be used for communication once each Sol. On the other hand, precision of measurements can be increased if both antennas can be used during the same day, e.g. to cancel out effects of orbital speed. This requires the tilt to be as small as possible.

The precise tilting angles are likely given by some constraints of the vehicle construction. Unfortunately I wasn't able to find more detailed construction considerations of Insight.

Not the answer you're looking for? Browse other questions tagged mars nasa planetary-science insight delay-doppler or ask your own question.

3
First interplanetary launch from California! How far from Earth will InSight be when it separates from the Centaur 2nd stage?
6
Moment of Inertia of a planet
6
Spacing for Martian Seismic Network
1
How will "InSight's onboard communications gear perform a radio-science experiment to shed further light on Mars' innards?" (Space.com)
4
How many solar system bodies have had coherent radio transponders?
2
Why will radioastronomy telescopes be used to listen to InSight's entry into Mars' atmosphere instead of DSN?
2
How will InSight's RISE antennas end up pointed in the right direction?
3
During final descent how will InSight know cardinal directions in order to land with proper orientation?
2
Are there any preliminary results from Mars lander InSight's RISE antennas?