The BBC article InSight Diary: The silence of space tells an interesting story and has an interesting audio recording of InSight's seismometer signals sped up to audio frequency, made while in presumably silent deep space on its way to Mars. Mysterious vibrations/sounds were recorded, and the article tells the story of their surprising discovery and mystery. It's worth the read.

These vibrations were detected in the two horizontal directions, by SP2 and SP3. Vertically oriented SP1 can not measure in microgravity because the Mars gravity-cancelling spring has no gravity to compensate it and so pushes the accelerometer to its limit.

If zero acceleration is too far out of the range of Mars' 3.71 m/s^2 acceleration, then Earth's 9.81 m/s^2 gravity would be way too large to test this accelerometer.

Question: Was the full 3D seismometer tested in Earth's gravity somehow? Perhaps dropped off the side of a building with a tether to simulate 0.38 g acceleration? 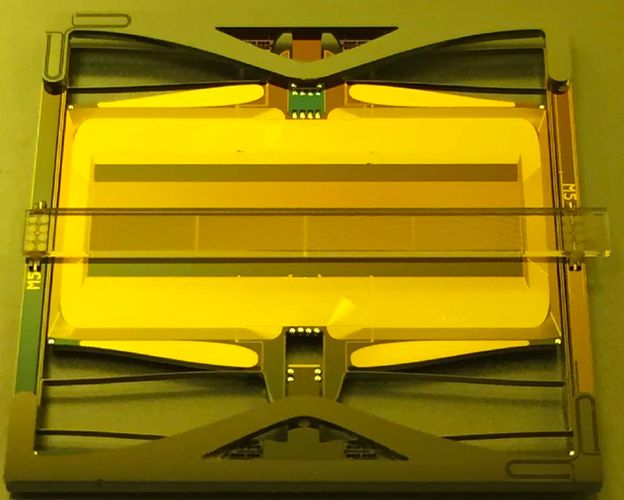 SEIS: Insight’s Seismic Experiment for Internal Structure of Mars has a truly gobsmacking amount of information all about Insight's seismometers.

as mentioned by commenter @asdfex above, tilting the sensor within Earth's gravity to simulate Mars' gravity was used:

A non-flight (but similar) model vertical-axis SP was field tested at ambient temperature, inclined to match Mars gravity, over six days in the Kinemetrics test vault in Acton, Southern California.

For the actual sensors actually installed into the actual spacecraft, it seems like, among other tests, they just turned them on at various times and waited to pick up some seismic events:

The mission schedule was compatible with only a few days of passive seismic monitoring at the different stages of the VBBs integration, both prior to their integrations in the sphere and after. Nevertheless, several earthquakes were observed by the Flight sensors during testing activities, including cold tests. Figure 14 shows two such earthquakes...

For those interested in the topic, there is much much much more information in the report linked above.

Not the answer you're looking for? Browse other questions tagged mars lander insight acceleration seismology or ask your own question.

19
Did the Mars rovers actually confirm the gravity of Mars?
6
Could an aircraft ever simulate Martian gravity perpendicular to the aircraft's floor?
7
Has Mars quaked yet? Any scientific speculation when it might?
4
Just how sensitive is the Insight seismometer?
1
How are the most sensitive seismometers on Mars protected from the most powerful jackhammer on Mars just a few feet away?
1
What is VBB recentering (InSight lander's Very Broad Band seismic pendulums)?

11
How exactly does the Dutch “Mars One” colonization program envision dealing with the difference in Earth's and Mars' gravity?
4
How was sky crane (used on Mars Science Laboratory's Curiosity) tested?
7
Has Mars quaked yet? Any scientific speculation when it might?