How do Mars spacecraft control attitude on final descent and landing?

When I watch videos of probes landing on Mars after cutting the parachutes off, they show the lander doing final orientation adjustments before touching down.

The engines don't seem to have a vectoring range, but I don't know if that's an omission of the animation or it reflects reality.

So I am wondering how does the probe correct its pitch, yaw and roll.

note: My question is about attitude control of recent Mars landers post-parachute, not about various animations that are out there. There have been many landing schemes on Mars, it's not necessary to go through every one, but if it's possible to focus on the more recent ones that would be most helpful.

As an example this answer links to Spaceflight 101 which says:

but it's not at all clear how that actually works.

There are 12 thrusters on InSight, mounted around the outer edge of the lander, all pointed in fixed generally downward orientation. The thrusters have electrically operated valves which can be operated in quite short pulses - the thruster can fire for a fraction of a second at a time.

By controlling the rate and/or duration of the pulses differently on different thrusters, the lander can produce more upward force on one side or the other, which causes it to tilt in the desired direction. This is "differential pulsing". I believe similar systems were used on Viking and MSL; not sure about Spirit & Opportunity.

During the terminal phase of descent, when the lander needs to be braking hard, the thrusters will be mostly on, with them turning off briefly on one side or another to control attitude by letting that side dip.

This gives pitch and yaw control. Roll control is a little less critical for descent, but it looks to me like the groups of thrusters at each corner of the lander are canted slightly apart from one another: 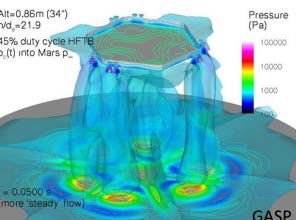 So differentially pulsing the thrusters in each group would give a little roll control.

The Spaceflight101 description suggests that the thrusters may be throttlable, but it's not clear to me if that means producing a time-averaged thrust level by pulsing, or a constant lower thrust by holding the propellant valve partly open; Aerojet's datasheet doesn't describe that exact model. Differential throttle attitude control works essentially the same as differential pulse control, anyway.

Not the answer you're looking for? Browse other questions tagged mars landing probe attitude-determination-and-control or ask your own question.

2
How will InSight's RISE antennas end up pointed in the right direction?

3
What are transonic oscillations (wrist mode) and would Schiaparelli have been transonic at 2 to 4 km altitude?
17
How does a landing spacecraft control main parachute inflation?
3
Hubble's one-gyro mode; how does it work for attitude control, stabilization, and slewing?
3
During final descent how will InSight know cardinal directions in order to land with proper orientation?
3
Help with Scott Manley's rigid body dynamics narration
2
What were Mars 2's conical aerodynamic braking shield and "gunpowder" engines?
6
Modeling attitude control: ramping/easing between attitude commands?